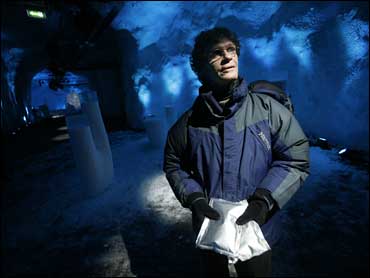 It's been dubbed a Noah's Ark for plant life and built to withstand an earthquake or a nuclear strike.

Dug deep into the permafrost of a remote Arctic mountain, Norway has created a "doomsday" vault to protect the world's seeds from global catastrophe.

The Svalbard Global Seed Vault, a backup to the world's 1,400 other seed banks, was being officially inaugurated in a ceremony Tuesday on the northern rim of civilization attended by about 150 guests from 33 countries.

The frozen vault has the capacity to store 4.5 million seed samples from around the globe, shielding them from climate change, war, natural disasters and other threats.

"There are not many countries in the world they could have pulled this off," said Cary Fowler, executive director of project partner the Global Crop Diversity Trust.

Norway owns the vault in Svalbard, a frigid archipelago about 620 miles from the North Pole. The Nordic country paid US $9.1 million for construction, which took less than a year. Other countries can deposit seeds for free and reserve the right to withdraw them upon need.

The operation is funded by the Global Crop Diversity Trust, which was founded by the U.N. Food and Agriculture Organization and Biodiversity International, a Rome-based research group.

It was about -15 Celsius (5 Fahrenheit) outside as reporters were allowed in for a sneak peak of the vault on Monday. But it was colder inside.

Giant air conditioning units have chilled the vault to -18 Celsius (-0.4 F), a temperature at which experts say many seeds could last for 1,000 years.

Inside the concrete entrance, decorated for the opening with an ice sculpture of a polar bear, a roughly 400-foot tunnel with steel and concrete leads to three separate 32-by-88-foot chambers where the seeds will be stored.

The first 600 boxes with 11 tons (12 U.S. tons) of seed have already arrived at Svalbard from 20 seed banks around the world, Norwegian Agriculture Minister Terje Riis-Johansen said at a seminar Monday. The first 75 boxes will be carried into the vault by guests as part of the opening ceremony.

The seeds are packed in silvery foil containers - as many as 500 in each sample - and placed on blue and orange metal shelves inside the vaults. Each vault can hold 1.5 million sample packages of all types of crop seeds, from carrots to wheat.

Construction leader Magnus Bredeli-Tveiten said the vault is designed to withstand earthquakes - successfully tested by a 6.2-magnitude temblor off Svalbard last week - and even a direct nuclear strike.

Even if power systems failed, the permafrost around the vault would help keep the seeds "cold for 200 years even in the worst case climate scenario," said Fowler.

He expected the vault's life span to rival that of Egypt's ancient pyramids.

"So much of the value of Svalbard is that it is so far away from the dangers" that affect many other parts of the globe, Fowler said. The archipelago is about 300 miles north of the Norwegian mainland.

Other seed banks are in less protected areas. For example, war wiped out seed banks in Iraq and Afghanistan, and one in the Philippines was flooded in the wake of a typhoon in 2006. Fowler said the Svalbard bank was a like an insurance policy.

"It's like you get in your car in the morning and drive to the office. You don't expect to get into a car accident, but you buy insurance anyway," he said.

The Svalbard vault is protected by armed guards, but their rifles aren't only meant to discourage uninvited humans from coming too close.

"My job is to keep away people who aren't supposed to be here, and guard against polar bears," said seed vault worker Jimmy Olsen, who was standing outside the entrance Monday with a bear rifle slung from his shoulder. There are an estimated 3,000 polar bears on the islands.

Norway has received praise from around the world for building the seed bank.

FAO Director-General Jacques Diouf on Monday called it "one of the most innovative and impressive acts in the service of humanity."

But the world spotlight has worried some locals who treasure the isolation of the Arctic archipelago.

"We like to be here a little bit for ourselves," said Kai Tredal, 42, one of the roughly 2,000 residents of Svalbard's main town of Longyearbyen.