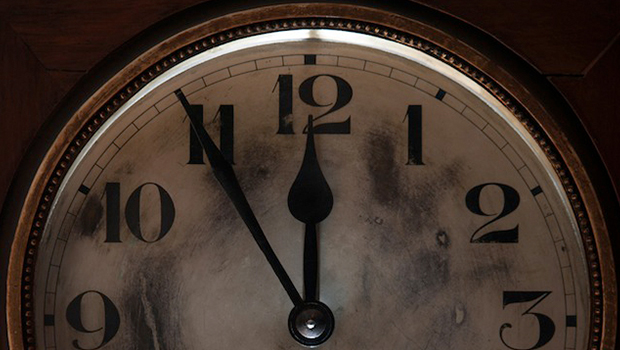 The iconic Doomsday Clock remains poised at five minutes until midnight, the Science and Security Board of the Bulletin of Atomic Scientists announced Tuesday.

The clock is no doomsday device rather, it's a visual metaphor for the danger of a "civilization-threatening technological catastrophe." Every year, the board analyzes international threats, particularly nuclear arsenals and climate change, and decides where the minute hand on the Doomsday Clock should rest. The closer it is to midnight, the closer the world is to doom.

"As always, new technologies hold the promise of doing great good, supplying new sources of clean energy, curing disease, and otherwise enhancing our lives. From experience, however, we also know that new technologies can be used to diminish humanity and destroy societies," the board wrote. "We can manage our technology, or become victims of it. The choice is ours, and the Clock is ticking." [How the Doomsday Clock Has Changed (Infographic)]

It's the end of the world as we know itThe Doomsday Clock is the invention of the Bulletin of Atomic Scientists, a publication started by some of the researchers who worked on the atomic bomb. The wife of one of these researchers, Martyl Langsdorf, was a painter. In 1947, she illustrated the first Bulletin cover to feature the Doomsday Clock set at that point at 11:53 p.m.

Langsdorf died in March 2013, but her creation lives on. In January 2012, the Bulletin's board set the minute hand of the clock at 11:55 p.m., one minute closer to midnight than the previous year. The decision was made based on the current state of nuclear arsenals around the globe as well as accidents such as the Fukushima nuclear meltdown that occurred in 2011 after a major earthquake and tsunami in Japan. Biosecurity is also taken into account, with the creation of an airborne strain of H5N1 flu worrying scientists in 2012.

This year, the board chose not to ease up on their warnings of doomsday, because of stalled relations between the United States and Russia, two countries with massive nuclear arsenals. After Russia offered political asylum to former National Security Agency contractor Edward Snowden, who leaked classified documents about U.S. surveillance, President Barack Obama cancelled a summit with Russia's Vladimir Putin, meaning there has been little to no progress on plans to shrink nuclear arsenals, according to the Bulletin.

Meanwhile, efforts to combat climate change are struggling as well, the Bulletin board warned. The United States, European Union and Australia all show wavering commitment to renewable energy, and Japan has backed off promises to voluntarily reduce greenhouse gas emissions.

Hope for humanity?The Bulletin board listed some steps humanity should take to secure its future, including demanding that the United States and Russia reopen dialogues on nuclear weapons. The board also urged political leadership on climate change and advocated for new rules to manage leaps forward in information technology.

The closest the Doomsday Clock has ever come to midnight was in 1953, when the minute hand ticked to 11:58 p.m. after the first test of the hydrogen bomb. It was at its most optimistic in 1991, when the Bulletin board set the time at 17 minutes to midnight as the Cold War ended.

Since 1991, however, the clock has been ticking gradually toward doom, as it became clear that total nuclear disarmament would not be happening.