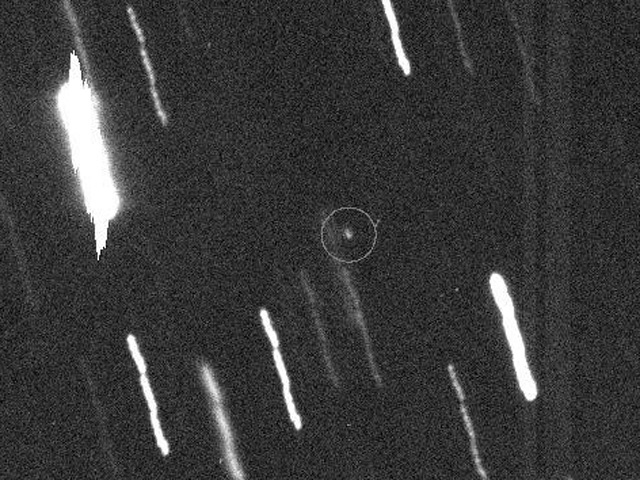 European space telescope has captured new images of the huge asteroid Apophis, revealing that the potentially hazardous object is actually bigger than previously thought -- and you have a chance to see the space rock yourself in two free webcasts Wednesday night.

Asteroid Apophis has long been billed as a "doomsday asteroid" because of a 2004 study that predicted a 2.7 percent chance of the space rock hitting Earth when it passes within 22,364 miles of the planet in April 2029, European Space Agency officials said. Later studies proved, however, that the asteroid poses no threat to Earth during that flyby, but astronomers continue to track the object since it will make another pass near Earth in 2036.

Today, ESA officials announced that its infrared Herschel Space Observatory has discovered that Apophis is about 1,066 feet wide, nearly 20 percent larger than a previous estimate of 885 feet.

"The 20 percent increase in diameter ... translates into a 75 percent increase in our estimates of the asteroid's volume or mass," study leader Thomas Müller of the Max Planck Institute for Extraterrestrial Physics in Garching, Germany, said in a statement.

Tonight's two free webcasts will stream live views of Apophis from telescopes in Italy and the Canary Islands tonight (Jan. 10). The webcasts, offered by the stargazing websites Slooh Space Telescope and Virtual Telescope Project, will show Apophis as a bright light moving across the night sky. The asteroid is too small to be seen through small backyard telescopes.

Apophis will be just under 9.3 million miles from Earth at the time of tonight's webcasts, amateur astronomer Gianluca Masi of the Virtual Telescope Project told SPACE.com.

"Alone among all these near-Earth asteroids that have passed our way in recent years, Apophis has generated the most concern worldwide because of its extremely close approach in 2029 and [chances of a] potential impact, albeit small, in 2036," Slooh president Patrick Paolucci said in a statement.

In addition to asteroid Apophis, astronomers regularly scan the night sky for asteroids that may pose a potential impact threat to Earth. NASA's Near-Earth Object Office and Asteroid Watch program is based at the agency's Jet Propulsion Laboratory in Pasadena, Calif.

You can track Apophis directly via the Virtual Telescope Project here: http://www.virtualtelescope.eu/webtv/

The webcast from the Slooh Space Camera can also be seen here: http://events.slooh.com/