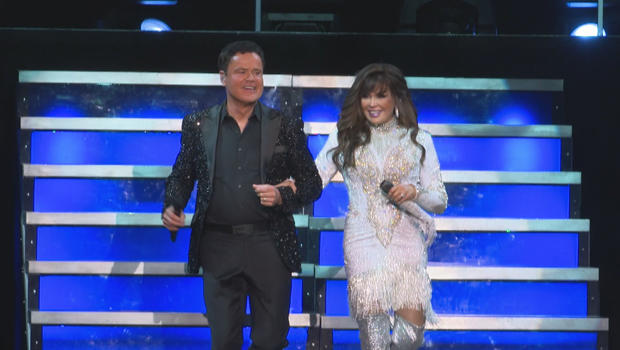 Donny & Marie have been in show business almost as long as they've been brother and sister. Donny Osmond started performing at age five on "The Andy Williams Show," and went on to become a teen idol. Marie Osmond made her debut with Andy Williams, too, at age three.  She went on to country music stardom with "Paper Roses."

Fast forward more than three decades, and Vegas brought them together again. For three years in a row, their revue at the Flamingo Las Vegas Hotel and Casino was voted the number one show.

Their fans hadn't gone anywhere; they came out in droves. But after 11 years, Donny and Marie have decided they'll bring the curtain down on themselves this November.

"Why end it after 11 years?" asked correspondent Lee Cowan. "You're still selling out. It's still a destination show. It's still getting awards. Why end it?"

"You know, there's an unwritten rule in show business and that is, you have to know when to stop," said Donny. "And unless you stop, you can't progress."

Marie said, "I just think we're at a place where we still have a lot of things we want to do."

They've reinvented themselves before. There's been Broadway, books and businesses. They're Utah's most famous export, never wavering from their Mormon faith.

Cowan asked, "The squeaky-clean image that you're known for, did that ever get in the way? Like, do you think if you didn't have that image, would you have gone even further?"

"It absolutely hindered my career," Donny replied. "It closed certain doors. I had a whole plan ready to be executed by my former public relations manager that I was gonna get busted for drugs coming in from an international destination."

"You were gonna fake it?"

"Was there ever a part of you that thought about doing it?"

Even when faced with bankruptcy after their variety show was suddenly cancelled, they never caved to temptation.

Marie said, "I got this call from Playboy for $5 million. And I could have used [the money]." But she reasoned, "I wouldn't wanna see my mom like that. And I really wanted to be a mom."

Yep, that wholesome images pretty much leaves their futures baggage-free.

Marie, who's now 59, is going on to daytime television, where she'll take a seat as one of the hosts of "The Talk," here on CBS, starting tomorrow. "I love a good challenge," she said. "And I love something that challenges me to just be open and honest. And there's no prep before; you just speak."

"Oh, no. There's no net. You need to know who you are if you're gonna do that show!" she laughed.

As for Donny, who turns 62 in December, he'll be focusing on a new solo album of all original songs.

He's been writing at his home in Provo, Utah, a place where he usually hides from the spotlight: "This is a very rare thing, Lee! This is a peek into my private world, that I don't let anybody see."

It's no secret the Osmonds have pretty big families, and Donny is no exception. With Debbie, his wife of 41 years, they have FIVE kids and 10 grandkids.

It's rarely quiet around here, and when he's not being pushed into the pool, he's a big do-it-yourselfer around the house. Out back where he's building a water feature for his grandkids by himself, he popped a wheelie in a backhoe.

It's the kind of care-free home life the Osmonds rarely experienced as kids.

Cowan asked, "Did you have friends? Did you go to school? How did that all work?"

"Interesting questions, because I never had time to have friends or peers," Donny replied. "I was on the cover of Tiger Beat and Sixteen Magazine, and I was really probably one of the most popular teen idols at the time, but extremely lonely."

When asked what advice she'd give her three-year-old self when she started performing, Marie said, "Run!"

As the only sister in the Osmond clan, she had darker challenges than loneliness. "I had a little bit of a struggle backstage with some abuse," she said. "And it was kind of a decision: 'Is it safer out there? Or is it not safe back here?' And I never told anybody."

Not until she wrote about it later in life, when she also revealed her postpartum depression.

"We all go through things, hard things," Marie said. "I don't need to lay out all the horribles. I don't think that helps anyone. But I do believe that it's important to be honest."

She's that way, almost to a fault.  When she lost her son, Michael, to suicide in 2010, she used the tragedy to open a discussion on mental health.

Cowan asked, "What was it that got you through that whole ordeal? Or maybe you're not through it?"

"You know, I don't think you're ever through it," Marie said. "I think God gives you respites, and then all of a sudden it will hit you like the day it did. The ripple effect is so huge, what you leave behind."

Her life now is full of joy, and full of babies.  She had eight children, and (so far) 10 grandchildren.

Her getaway is their getaway, at St. George, Utah. She shares this mountain-top retreat with Steve Craig, her first husband, whom she remarried back in 2011.

"I was really planning on being single the rest of my life. Honest!" she laughed.

Through all their trials and tribulations, the stage has been a pretty safe place for both Donny & Marie, which makes it a place that's much harder to leave.

Cowan asked, "What's the last show here gonna be like for you guys?"

"Emotional," Donny said. "I don't even wanna think about it."

"Well, I think we'll just get through it and then think about it after," Marie said.

So, is Donnie & Marie really over?  Don't count on it.

Donny said, "Never say 'Never,' because there might be something around the corner, Marie, that we look at each other and say, 'Let's try it.' You know, why not?"

"I might be senile when I do it, but that's okay!" she laughed.