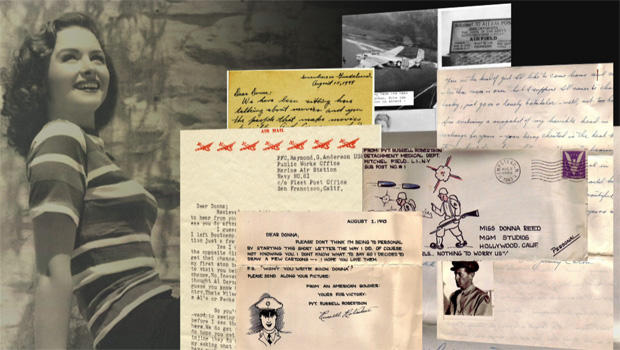 Donna Reed's TV show was a hit in the late '50' and '60s, and she was also famous for her Oscar-winning role in the 1953 film "From Here to Eternity." But a role she played off-screen was nearly lost to time. Martha Teichner found it:

"It's a Wonderful Life" season is here again, starring (along with Jimmy Stewart) Donna Reed. The backstory of this 1946 Christmas classic is World War II, just over and still haunting its cast (and the country).

For Mary Owen, Donna Reed's daughter, the war and the movie will always be connected.

Every year, before some showings, she reads letters her mother received from soldiers and sailors during WWII:

"It's for people of your character and caliber that we are fighting for. Sincerely, Pvt. Joseph F. Dastoli"

Owen found the letters after her mother died in 1986 -- more than 350 of them, carefully saved for more than 40 years.

"It was nice to read them all at once," Owen said, "because it captured, almost like, the pin-up culture. These women were almost like talisman that these men were pinning up in their barracks to get them through the war, and to remind them what they're fighting for."

"I'm investing 10%, but I feel that isn't very much. So this week, I joined the Hollywood Canteen, which enables me to entertain soldiers at the Hollywood USO at least one night a week, for three hours."

It was for servicemen only. Between 1942 and 1945, more than 3 million came to see the biggest names in show business. Stars didn't just put on shows; they served meals, signed autographs, and danced with anybody who asked.

Actress Marsha Hunt, now 100, was a regular on Saturday nights. Teichner asked her, "Was it flattering to you, or was it uncomfortable to be touched by so many people?"

"No, I understood; it was fame," said Hunt. "They were dancing with fame, not with Marsha Hunt.

"It was a privilege to be among them, and to give them a lift of morale, which it certainly did. I guess there might've been some pride in it, because you weren't sure that any of them would ever come home. And so, you did that little thing, you signed your silly name, and it seemed to matter to them and to their folks back home."

Practically everyone who wrote to Donna Reed wanted a signed photograph. Soldier Glenn Peterson grew up 30 miles from Denison, Iowa, where Reed was from. She signed a portrait, "To Glenn, my neighbor from Iowa."

Jerry Peterman, a volunteer archivist at the Donna Reed Foundation for the Performing Arts in Denison, showed Teichner a picture of the farmhouse where Reed was born, her parents standing at the front gate.

The farmhouse is gone now, but Donna Reed, the farm girl who won herself an Oscar (for "From Here to Eternity") and starred on TV in "The Donna Reed Show," is everywhere in Denison.

"It was always the 'girl next door,'" said Peterman, who added Reed's wholesome image was real.

Owen read another letter from the troops, dated August 18, 1944: "We think you are the typical American girl, someone whom we'd like to come home to!!!!!"

One group of soldiers wrote that they wanted her to be their "Squadron Angel."

Others wrote, "We have what we call the 'Tunnel Club,' and we've elected you Miss Tunnel 1944." ("Not everyone can say that!" Owen laughed.) "The Tunnel Club is composed of five lonely officers of this Ack Ack Brigade, who sleep in a tunnel under the remains of an Italian Villa."

"To prove our adoration real,
to prove our love is deep,
this photo shows your precious name
adorns our faithful jeep."

And sometimes, their brave, jokey letters belied their terror:

"With you as our movie girlfriend, I imagine we'll survive."

Lt. Norman Klinker didn't. Like Donna Reed, he was from Denison, Iowa. He'd gone to Harvard Law School. He wrote from the battlefield:

"Tough and bloody and dirty as it is at times, there is none of that grim and worried feeling so rampant in war pictures.  It's a matter-of-fact life we live and talk here.  And here for the first time no one has the 'jitters.'"

Klinker was killed in January 1944 in Italy. His father, a local judge, died six days after getting the news about his only son.

Those old shoeboxes Mary Owen found were filled with the hopes and fears and fantasies of soldiers whose dreams of Donna Reed were a gift whose value she understood, and treasured.

"Dear Private Davidson, You say that I am 'the kind of girl you'd like to come home to.' That is the finest compliment I've ever been paid."