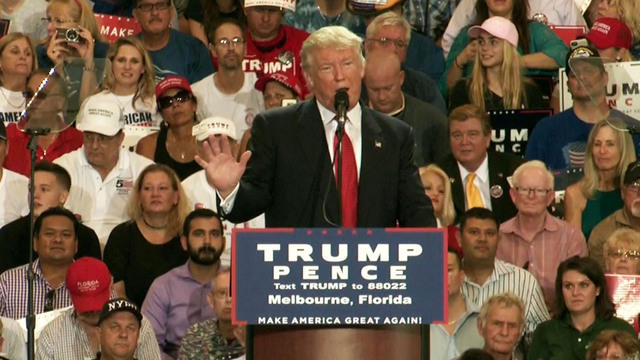 Those were the first words out of Phil Bollhagen’s mouth at a coffee shop on Main St. here on Tuesday when he was asked about Donald Trump.

Bollhagen, a native of Waukesha County, is a Republican who voted for Cruz in the primary back in April. He is a retired High School American literature teacher and exactly the kind of voter that Trump needs to win over in Wisconsin if he hopes to beat Clinton here.

If Bollhagen is any indication, Trump has a steep hill to climb among unconvinced Republicans in southeastern Wisconsin where Trump is holding a rally later today.

“Who are you going to vote for?” Bollhagen asked rhetorically, “You have two losers. I’d like to vote for Trump, but I am more afraid of Trump as president than I am of Hillary -- at least she is traditionally bland.”

Polls show the race in Wisconsin, which has voted for Democratic presidential candidates in every election since 1988, is surprisingly close. Yet despite Clinton’s vulnerabilities, Trump still has a lot of work to do in convincing Republicans.

Wisconsin was the place that handed Trump his last big defeat before he secured the nomination. Now, with under six weeks to go until election day, Trump is back and campaigning in the most crucial part of the state for any Republican who wants to win here - Waukesha County.

Bordering Milwaukee County, Waukesha is the third largest county in the state and the most conservative. The area has had a historically high rate of Republican turnout and represents a disproportionate share of Republicans in the state.

To say that Trump didn’t perform well there during the primary would be a pretty dramatic understatement. Trump lost Waukesha county to Ted Cruz by around 48,000 votes, or 39 percent. Trump lost the state by 144,000 votes total, meaning Waukesha accounted for 33 percent of that total deficit.

These margins seen in Waukesha during the primary were similar to other suburban counties across southeastern Wisconsin where Republicans have to perform well in order to win the state. In April, it was clear these Republican voters were not behind Trump, and many are still on the fence.

“We have to bring home Republican voters in southeastern Wisconsin, we are within two point and she [Clinton] has hit her ceiling.” Meachum said, “but I would rather have the problems we have versus the ones that she does.”

Meachum sees an opportunity to give voters - like Bollhagen - a positive reason to vote for Trump in the last 40 days of the race and added, “they don’t have to be motivated to vote against Hillary Clinton”.

“Donald Trump is going to the area of the state he most needs to boost his performance,” Charles Franklin, Director of the Marquette University Law School’s polling unit, explained.

“In three August and September 2012 polls, Romney averaged an 11 point lead in the suburban counties in the Milwaukee area, including Waukesha, In three polls taken this year in August and September, Trump has averaged just a 2 point lead in that area, which is normally the strongest Republican area in the state. If Trump could bring this south-eastern Wisconsin area back to the advantage Romney enjoyed it would boost his chances of winning Wisconsin considerably,” Franklin said.

The race in Wisconsin has in fact tightened since August, although Clinton has maintained a lead throughout. The latest Marquette University Law School Poll showed Clinton up two points over Trump, 44 percent to 42, among likely voters. The Real Clear Politics average currently has Clinton up 5 percent.

In 2012, polling showed Obama maintaining a low single digit lead in the polls over Romney throughout the fall, although several did show Romney tied in late October, just weeks before the election. In the end, Obama won the state by almost 7 points.

The Trump campaign believes their candidate’s appeal to white working class voters makes him more competitive here. Operatives on the ground argue that Trump is running better in more rural areas of the state compared to past candidates, and now is the time to convince hesitant but reliable Republicans in southeastern Wisconsin to back Trump.

For their part, the Clinton campaign in Wisconsin remains confident. They point to the field operation that they have built along with Monday’s debate performance, which has them believing that they are on solid footing and poised to take the state and continue the streak of Democratic presidential victories here.

“Trump really is not specific enough to know what he is talking about. Hillary she knows all that stuff, she can nail Trump to the wall on facts, because Trump won’t know the facts,” Bollhagen said. “Would you give the codes to the missiles to Trump?  What would he do?”

When asked if Trump campaigning in Waukesha was a good move, Bollhagen thought so, but expressed skepticism about whether it would have a real impact: “Trump has come to the right place for sure, whether he is going to get the votes here I tend to doubt. People voted for Cruz, not Trump, and I think that is how it is going to be.”

Whether or not that meant that he would just decide to stay home on Election Day, Bollhagen remained conflicted, and said it all came down to trust.

“I really don’t know what to do,” Bollhagen said as he finished his blueberry cheesecake. “I’d like to trust [Trump] but I don’t know that I can.”