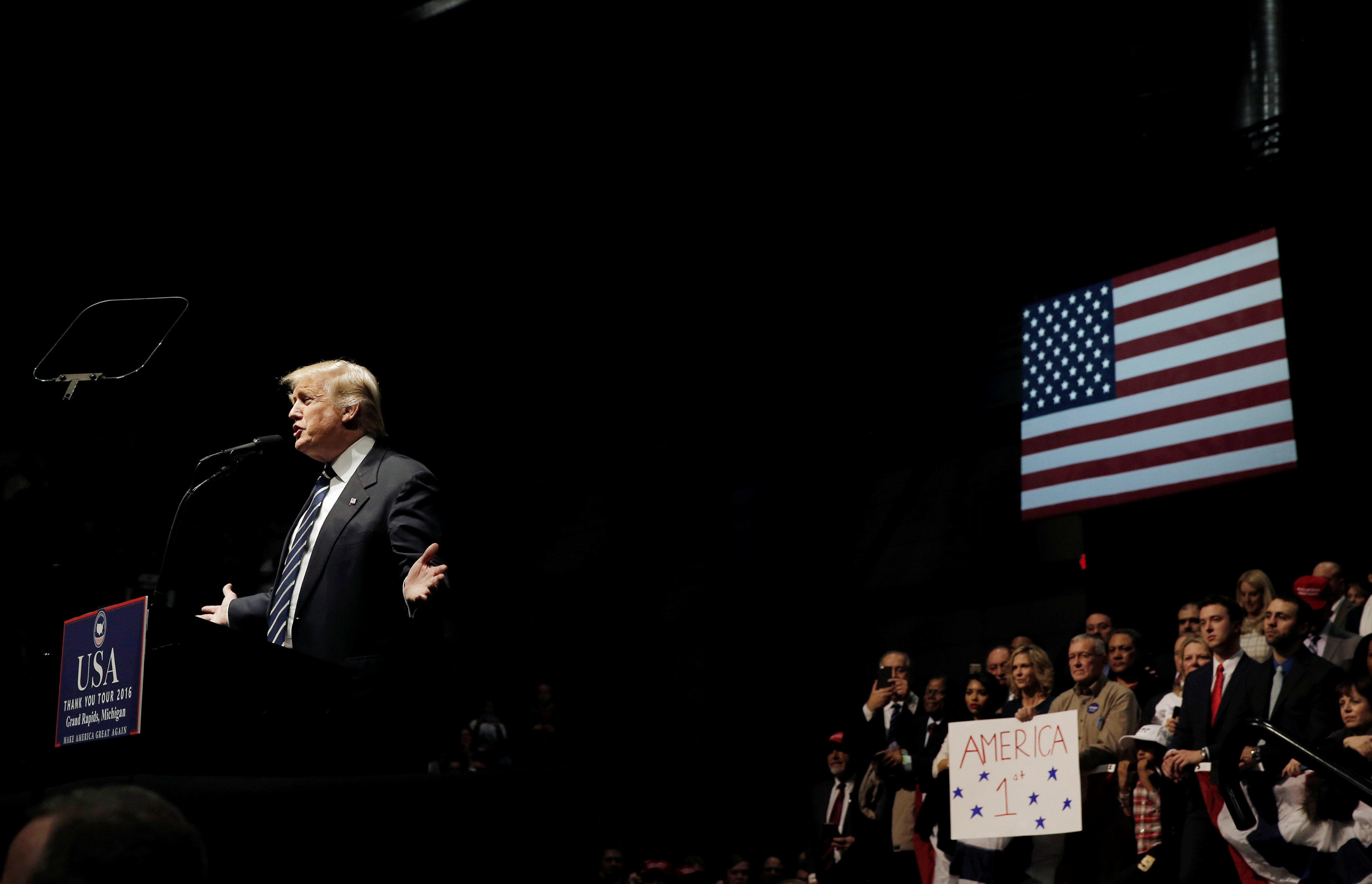 Mr. Trump regaled supporters in Grand Rapids with a lengthy recitation of his victories in a string of battleground states, including Michigan, which had not previously backed a Republican presidential candidate since 1988.

Several protesters were removed from his rally at DeltaPlex Arena, prompting the president-elect to declare at one point, “Get ‘em out of here.”

Mr. Trump introduced Betsy DeVos, his choice for education secretary, who hails from West Michigan, and announced that Andrew Liveris, the chief executive of Dow Chemical, would lead a national manufacturing council. Liveris told the audience that Dow would soon bring a new research-and-development center to Michigan.

In Louisiana, the incoming president addressed a large crowd at an airport hangar, and at one point tossed his trademark “Make America Great Again” hat to a supporter. He noted that he’d been named Time’s “Person of the Year” and asked the crowd if the magazine should go back to its former “Man of the Year.”

Gauging the boisterous response, he declared the answer was yes.

Mr. Trump campaigned for Republican John Kennedy, the state treasurer who faces off Saturday against Public Service Commissioner Foster Campbell, a Democrat, for the seat of retiring Republican Sen. David Vitter. Neither won a majority in the November primary, leading to the runoff. Polls have shown Kennedy with a comfortable lead.

While candidate Mr. Trump was often at odds with the establishment wing of his party, the incoming president has been broadly supported by GOP leaders since the election. And he is trying to consolidate any lingering factions, most immediately in Louisiana, where a victory by Kennedy would cement the party’s four-seat advantage in the new Senate.

“We need John in Washington,” Mr. Trump said, speaking in front of a lectern that urged voters to “Geaux Vote. Vote GOP.” Trump said he needed Kennedy to help him enact his agenda.

In private, people close to Mr. Trump said he was expected to name yet another Goldman Sachs executive to his White House team. The president-elect’s National Economic Council is to be led by Gary Cohn, president and chief operating officer of the Wall Street bank, which Mr. Trump repeatedly complained during the election campaign would control Hillary Clinton if she won.

Washington state Rep. Cathy McMorris Rodgers, a member of the GOP House leadership team, emerged as a leading candidate to head the Interior Department, according to a person involved in the transition.

Major decisions remain for Mr. Trump, most importantly his choice for secretary of state. The deliberations have become a source of tension within his transition team, with chief of staff Reince Priebus said to be backing Mitt Romney while other advisers oppose the idea of selecting the 2012 GOP nominee, given his fierce criticism of Mr. Trump during the campaign.

Mr. Trump announced that Rudy Giuliani, the former New York mayor who was an early favorite, was no longer under consideration.

On a busy Friday, Mr. Trump also spoke by telephone with Scotland’s First Minister Nicola Sturgeon, who broke with protocol during the campaign to publicly endorse Hillary Clinton and said afterward she would not maintain “a diplomatic silence in the face of attitudes of racism, sexism, misogyny or intolerance of any kind.”

Mr. Trump brimmed with optimism during his two rallies, eager to begin implementing his agenda.

Come January, Mr. Trump told the crowd in Michigan: “The American people will be in charge. Your voice, your desires, your hopes, your aspirations, you will never again fall on deaf ears.”

He rattled through some of the major themes of his campaign, vowing to renegotiate faulty trade deals, repair roads and bridges and “build a wall” to guard against unlawful immigration.

“We are really excited about getting to work and hitting the ground running in 2017,” Ryan said after the morning meeting.

Meanwhile, there apparently is a split over the next head of the Republican National Committee. Current chairman Priebus is heading to the White House to be chief of staff.

Priebus is said to support Michigan Republican Party chairwoman Ronna Romney McDaniel for the post, though other senior officials are backing Nick Ayers, an aide to Vice President-elect Mike Pence. McDaniel addressed the Michigan crowd before Mr. Trump took the stage but no RNC announcement was made.