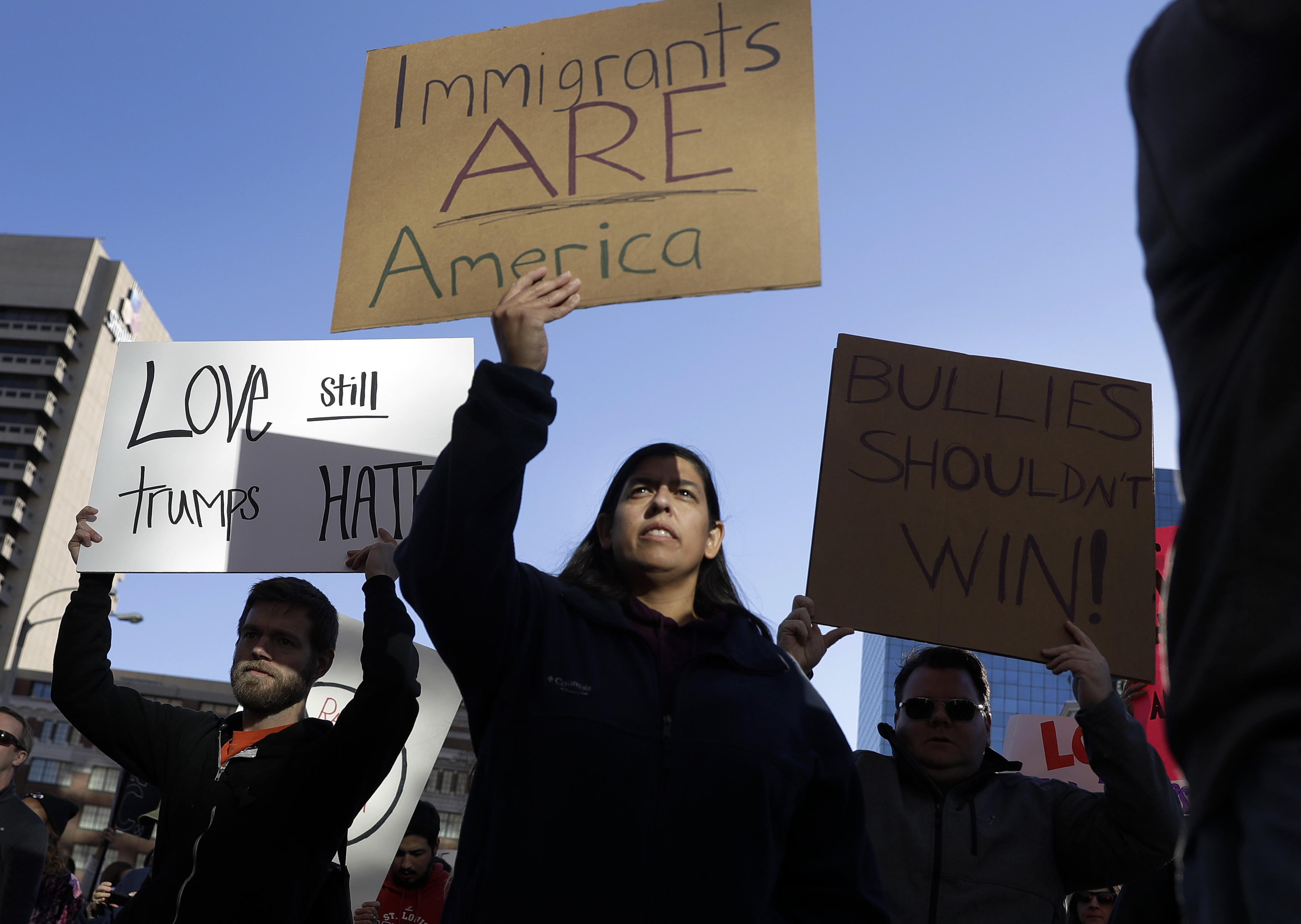 NEW YORK -- Immigrants, their advocates and others opposing a Donald Trump presidency continued to protest Sunday, speaking out against the president-elect’s support of deportation and other measures.

Organizers in Manhattan carried signs in English and Spanish saying things like “Hate won’t make us great,” and chanted, “We are here to stay.”

As the protests continued across the country,President-elect Trumptold “60 Minutes” correspondent Lesley Stahl about his mass deportation plans and urged Americans of all stripes to give him a chance after a tumultuous campaign that saw vitriol largely replace serious debate over policy. He also urged those people reportedly harassing Muslims and immigrant groups to “stop it.”

More than 1,000 people joined the march in New York City that started mid-afternoon and extended into the evening.

The area surrounding the president-elect’s Midtown home had become like a fortress, with Secret Service agents and NYPD  officers going to extremes to protect the future president, CBS New York reported.

It was the latest in days of demonstrations across the country, and even throughout the world. Protests were held Sunday in Los Angeles, San Francisco, Philadelphia and more cities.

Several hundred protesters Sunday marched around Philadelphia’s City Hall and then down Market Street to Independence Mall, carrying signs and chanting “Donald Trump has got to go!” and “This is what democracy looks like.”

In Los Angeles, a few hundred people gathered outside CNN’s Los Angeles headquarters, and in San Francisco, hundreds of people, including many families with children, marched from Golden Gate Park to Ocean Beach chanting “Love trumps hate!” By nightfall, a few hundred people marched across downtown San Francisco’s main street, blocking traffic at an intersection when they held a sit-down protest.

Elsewhere in California, about 800 people marched through Sacramento and thousands others formed a human chain around the nearly 3.5-mile perimeter of Oakland’s Lake Merritt. Rallies in Oakland have at times become unruly, but those who came to the lake held hands and chanted, “We reject the president-elect.”

Demonstrations also took place internationally. On Saturday, a group of Mexicans at statue representing independence in Mexico City expressed their concerns about a possible wave of deportations. One school teacher said it would add to the “unrest” that’s already in Mexico. About 300 people protested Trump’s election as the next American president outside the U.S. Embassy near the landmark Brandenburg Gate in Berlin.

Mostly, the demonstrations were peaceful. However, in Portland, Oregon, a man was shot and wounded Saturday morning during a confrontation. Police arrested two teenagers in the shooting.