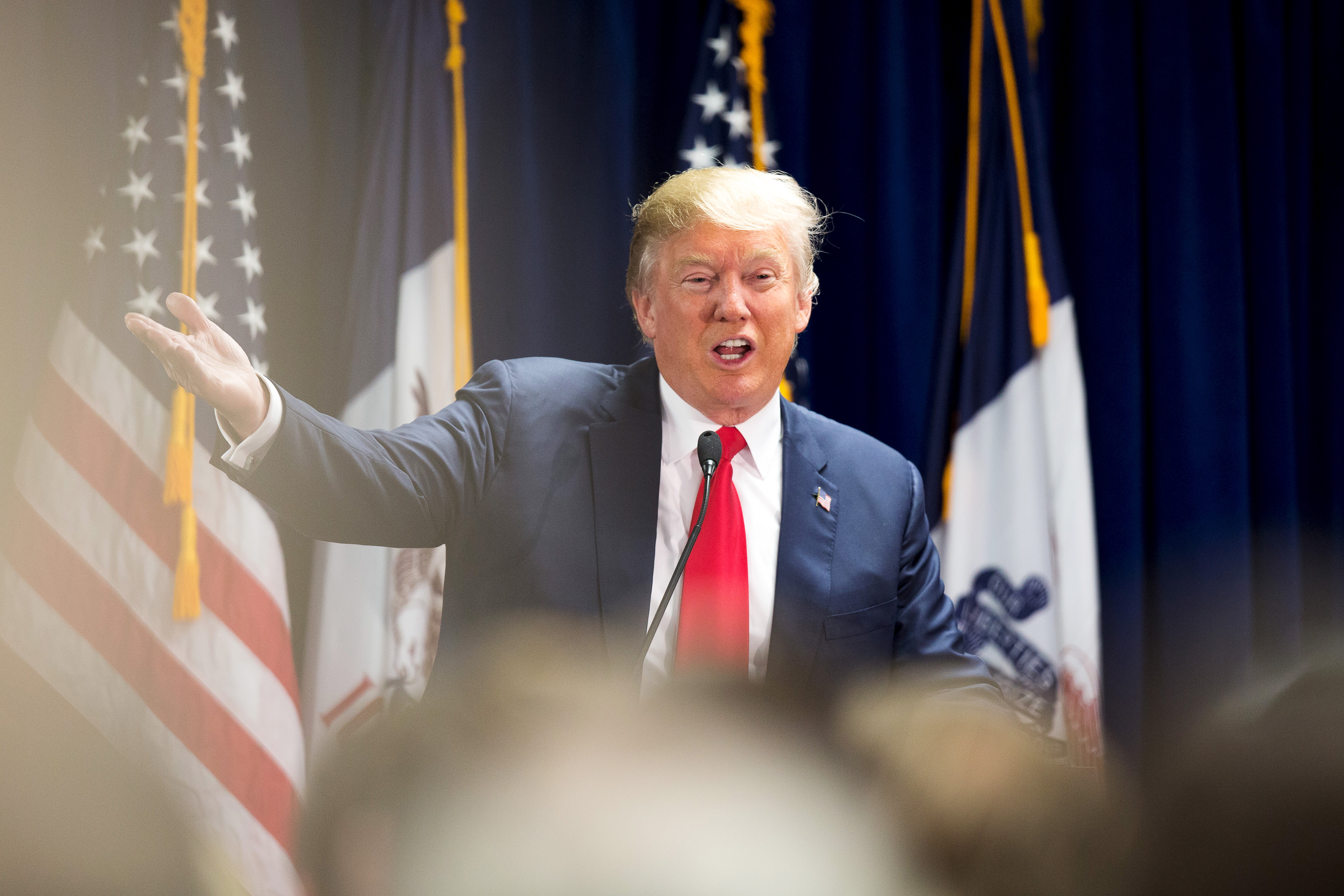 NEWTON, Iowa -- Republican presidential candidate Donald Trump is not ruling out the use of databases to track Muslims.

"Is that something your White House would like to do?" NBC News asked.

"Oh I would certainly implement that. Absolutely," Trump answered. But while the reporter was following up on his own question about the databases, it was not completely clear whether Trump's answer referred to the databases -- or to his wall, U.S. strength, the initiatives he himself had just mentioned.

Soon after, however, the reporter asked whether Trump would go to mosques "to sign these people up?"

The question of databases for Muslims was raised by Yahoo News' Hunter Walker in an interview with Trump published Thursday. Trump talked about the impact of the Paris attacks, saying, "We're going to have to do things that we never did before. And some people are going to be upset about it, but I think that now everybody is feeling that security is going to rule," Trump said. "And certain things will be done that we never thought would happen in this country in terms of information and learning about the enemy. And so we're going to have to do certain things that were frankly unthinkable a year ago."

When Walker asked "whether this level of tracking might require registering Muslims in a database or giving them a form of special identification that noted their religion," Walker said Trump "wouldn't rule it out."

According to the Associated Press, asked by reporters Thursday night to explain his Yahoo comments, Trump suggested his response had been misconstrued. "I never responded to that question," he said.

In Newton, the rally was uncharacteristically calm. Trump claimed polls have been rising in his favor since the Paris attacks and people here have a growing affinity for his hard line on immigration.

"I think that people look at me as being a strong leader. And I think probably you have seen the polls go very much up since that time," Trump said to reporters after speaking to a crowd of 350 in Newton, Iowa.

What Newton's voters are looking for in a strong leader, though, is one who will keep jobs in the U.S. The town is still economically skittish after the closure of the Maytag factory in 2007 resulted in the loss of 5,000 jobs. That hit the town hard -- David McNeer saw the negative effects first-hand.

When "60 Minutes" did a story on the lasting effects of the economic downturn in 2010, he was a voice from Newton who explained that the recession's impacts were still very real in the town. McNeer owns Maxim Advertising in Newton, Iowa -- it puts its customer's logos on nearly anything and until 2007 the business had been consistently growing with Maytag as one of their primary customers.

Five years ago the "60 Minutes" story showed McNeer was unhappy with the pace of the economic recovery. But now unemployment now is just above 3 percent -- a huge decrease from the 9.6 percent levels of 2008. And that interview McNeer did ended up helping his own economic recovery.

"He is a real person. And he is a business person," McNeer said, noting that not one politician called him up after the interview.

He met with Trump hotel executives in Chicago, and they steered business to McNeer and told him that if Trump ever ran for president, he should be ready to go into advertising action for the campaign. Now the campaign has a six-figure deal with Maxim Advertising -- producing all of the campaign gear in Iowa: the buttons, knit-hats, t-shirts and signs.

Still, not all Newton residents are sold on Trump or even convinced that politics can prevent what happened in this town.

At 80 years of age, Joan Jones of Newton worked at that Maytag factory with her husband and her four sons. They all lost their jobs. Since then she has retired and watched with pain as her sons struggle to find jobs -- ending up as a custodian, a teacher, a school bus driver and a factory worker.

"A lot of things are right about what Trump says," Jones said. "But do I want someone that will think instead of blow off their mouth."

Trump is behind Carson in the polls and he used this evening to tell the crowd "Carson is in free-fall." He suggested that his speech in Iowa last week may have contributed to this, when he likened Carson to a child molester with a pathological disease. Thursday he hit Carson on foreign policy, saying, "We cannot have a man incapable of learning foreign policy."

This was Trump's third trip to the state in about a month and instead of calling the Iowans "stupid" as he has in the past -- he gave Iowa a big pitch, promising that the Iowa caucuses would stay put if he wins here and goes on to be President -- "no one will tell Iowa you are going to move back 12 weeks," he said to the crowd.

Afterward, Trump unleashed a torrent of Tweets targeting Kasich, including these: