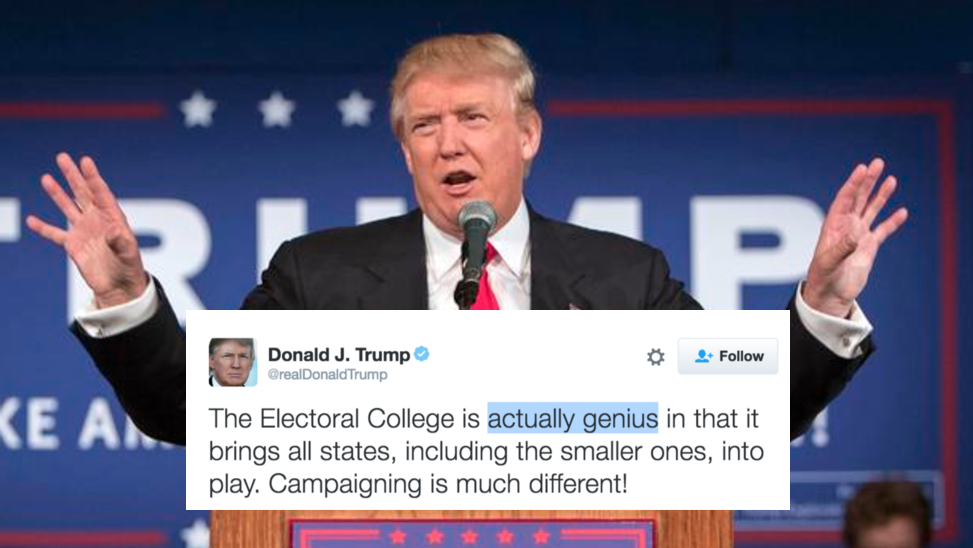 For months leading up to the election which he eventually won, Donald Trump repeatedly called the system “rigged.” And it turns out it’s not the first time he’s cast doubt on the way America chooses is leaders.

Fast forward to present day, and as Trump begins his transition of power, the businessman may now realize that without the Electoral College, he probably wouldn’t be the president-elect.

Trump’s attitude toward the Electoral College appears to have shifted.

On Tuesday morning, the president-elect tweeted, “The Electoral College is actually genius in that it brings all states, including the smaller ones, into play. Campaigning is much different!”

Regardless, Trump assures his supporters that he would have won.

“If the election were based on total popular vote I would have campaigned in N.Y. Florida and California and won even bigger and more easily,” he said.

In light of that, Twitter users were quick to resurface the president-elect’s 2012 tweetstorm, blasting the reelection of President Barack Obama and the entire electoral process:

He criticized the electoral process as a “total sham”:

He also encourage citizens to “fight like hell” over “this travesty”:

In several tweets he later deleted, Trump wondered how Obama won even though Republican nominee Mitt Romney had more votes (though in the end, Obama won the popular vote as well).

“He lost the popular vote by a lot and won the election,” Trump tweeted. “We should have a revolution in this country!”

He has yet to comment on whether he still believes the system is rigged.