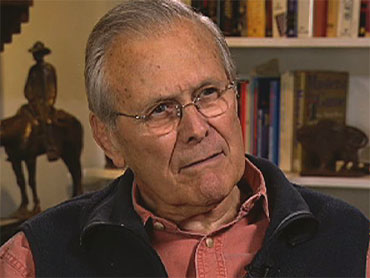 Former Secretary of Defense Donald Rumsfeld has just published a memoir titled "Known and Unknown." The title comes from his famous remark that in military intelligence there are "known knowns, known unknowns, and unknown unknowns." Secretary Rumsfeld sat down to talk about his long and controversial career with our national security correspondent David Martin:


As long ago as 1971, Richard Nixon was heard on the Oval Office tapes grousing about "the Rumsfeld problem."

Donald Rumsfeld was a Presidential aide and maybe too big for his britches.

"Rumsfeld is a different cup of tea," President Nixon said.

Nearly three decades later, "the Rumsfeld problem" came to the Pentagon with orders from President Bush to shake the place up.

"Change is hard. But did you make it harder than it had to be by alienating people?" asked Martin.

"If you don't want to change and someone above you wants to, it's not fun, replied the ex-Secretary of Defense.

The former college wrestler grappled with a military establishment he viewed as unimaginative and cumbersome. What started as a bureaucratic battle became a matter of life and death after 9/11.

He wanted small commando teams on the ground in Afghanistan to call in air strikes, but when the bombing started they still hadn't made it in.

And his famous impatience boiled over. In his book he writes, "We are sitting here like little birds in a nest waiting for someone to drop food in our mouths."

And he wrote this memo to the Chairman of the Joint Chiefs: "I am seeing nothing that is thoughtful, creative or actionable. How can that be?"

"That was a good memo," Rumsfeld commented. "And what I wanted to do is to put some sense of urgency into this big Department of Defense, the bureaucracy."

"Why did you call it the 'Goose Egg Memo'?" asked Martin.

"Because I think in the memo I said, 'What are we coming up with? A Goose Egg. We haven't got any new creative ideas that we -- how this department can contribute to the Global War on Terror.'"

In public he relished the role Special Forces played in the swift ouster of the Taliban. In private, he was warning President Bush: "Afghanistan risks becoming a swamp for the United States."

"This is what keeps guys like me in business," suggested Martin. "You're urging patience ... in public and in private you're writing things like the Goose Egg Memo. Do you see the disconnect between the public and private statements?" asked Martin.

"No," said Rumsfeld. "There's no disconnect at all."

"But in private you're much more unhappy with what this system is doing."

"Once you're satisfied and comfortable in a war," Rumsfeld said, "you lose."

The Bush administration certainly wasn't satisfied with just going after Osama bin Laden. Even before the bombing of Afghanistan began, it was secretly planning to take out Saddam Hussein.

"When did you first talk to President Bush about going after Saddam?" asked Martin.

"Oh, I think it was in September," Rumsfeld replied.

"So before the first U.S. boot is on the ground in Afghanistan …"

"He called me into the Oval Office and he said, 'Do you have a war plan for Iraq?'" Rumsfeld explained.

But as he was gearing up for war the Secretary of Defense was engulfed by a personal crisis - his son Nick was losing his own battle with drug addiction.

"Cause he was disappearing for weeks at a time now? And he's just shown up? Is that, is that how it…?" Martin asked.

"I think that's right. It's a painful process," said Rumsfeld.

Nick made it rehab. But just as U.S. forces were storming Baghdad, Rumsfeld's wife Joyce nearly died. "She ended up with a perforated appendix and she was being poisoned," said Rumsfeld.

"You thought you might lose her," Martin said. "So how's that work? Fifteen hours a day, Secretary of Defense, war going on."

"People were risking their lives," said Rumsfeld. "You simply have to pay attention, and I did. Go early in the morning to see her."

"How long did that go on for?"

"You think it affected any of your decisions?" asked Martin.

The Rumsfelds now spend much of their time on their ranch near Taos, New Mexico. They began dating in high school but went their separate ways in college until he launched a pre-emptive strike.

"I just simply didn't want to get married," Rumsfeld explained. "But I didn't want her to marry someone else! It was one of those things. And so I caved in and asked her to marry me. And fortunately she yes. And that was, I think, 56 years ago."

Fifty-six years of high pressure, high profile jobs - as a congressman, White House Chief of Staff, and Secretary of Defense (not once, but twice).

"Give me an example? Like, 'Should I go back to the Pentagon again and be Secretary of Defense?'" laughed Joyce Rumsfeld.

"He didn't have the nerve to even tell me about it for hours - after he was asked," she said. "He's afraid of me, basically!"

"There was this phase when he was a rock star," Martin prompted.

"A rock star," said Joyce Rumsfeld. "And then the minute, I mean if you think that fazed me it didn't at all. Because you know it will end, and then he'll be the goat."

Which is what happened when, in the summer of 2003, Rumsfeld recruited former State Department official Paul Bremer to run the occupation in Iraq.

"He supposedly worked for me. He never really did," Rumsfeld said.

"It seems like he almost blew you off," Martin suggested.

"We had given him written guidance as to what to do and it said, 'Let's get an Iraqi face on this. Let's get Iraqi leadership going,'" said Rumsfeld. "And Bremer didn't want to go fast. He was highly critical in his book about the Iraqi people, and suggesting they weren't capable of managing a three-car parade."

On top of that, the military commander, Ricardo Sanchez, was the most junior lieutenant general in the Army, and had a scandalously undermanned headquarters.

"I raised 16 kinds of the dickens about it . . . and the Army didn't get it staffed," Rumsfeld said. "He went on for a long period with a seriously understaffed command."

It was a set up for failure, and Rumsfeld was in charge.

"You are responsible for the occupation of Iraq," said Martin.

"There's a presidential directive saying you are responsible. You have a command which is not up to the job. You have a civilian authority in Iraq not really taking your guidance," Martin continued.

"And not working closely with the military, which is unfortunate," Rumsfeld added.

"Why did you stand for that?" asked Martin.

"You have to cut him some slack," Rumsfeld explained. "You have to assume that he knows what he's doing, and work with him. He's there on the ground."

Then in April 2004 the Abu Ghraib scandal - with its still shocking photos - broke. Rumsfeld offered to resign, twice. But the President said no.

"Do you think it would have been better if you had insisted on resigning?" Martin asked.

"How would that have made things better?"

"It would have been a stronger signal to the world that we didn't accept that kind of behavior," Rumsfeld said.

"Did you feel it was your fault?"

"You were responsible, but it wasn't your fault?"

Finally, in 2006, with Iraq on the verge of all-out civil war, the President told Rumsfeld he had to go.

"It was hard for him to do that - to come to that conclusion," said Rumsfeld. "And of course I felt the same way when I had to fire somebody. I didn't like it either. He said, 'Are you OK with this?' And I said 'Absolutely.'"

Is he responsible for what went wrong?

"We all were responsible," says Rumsfeld. "We all agreed."