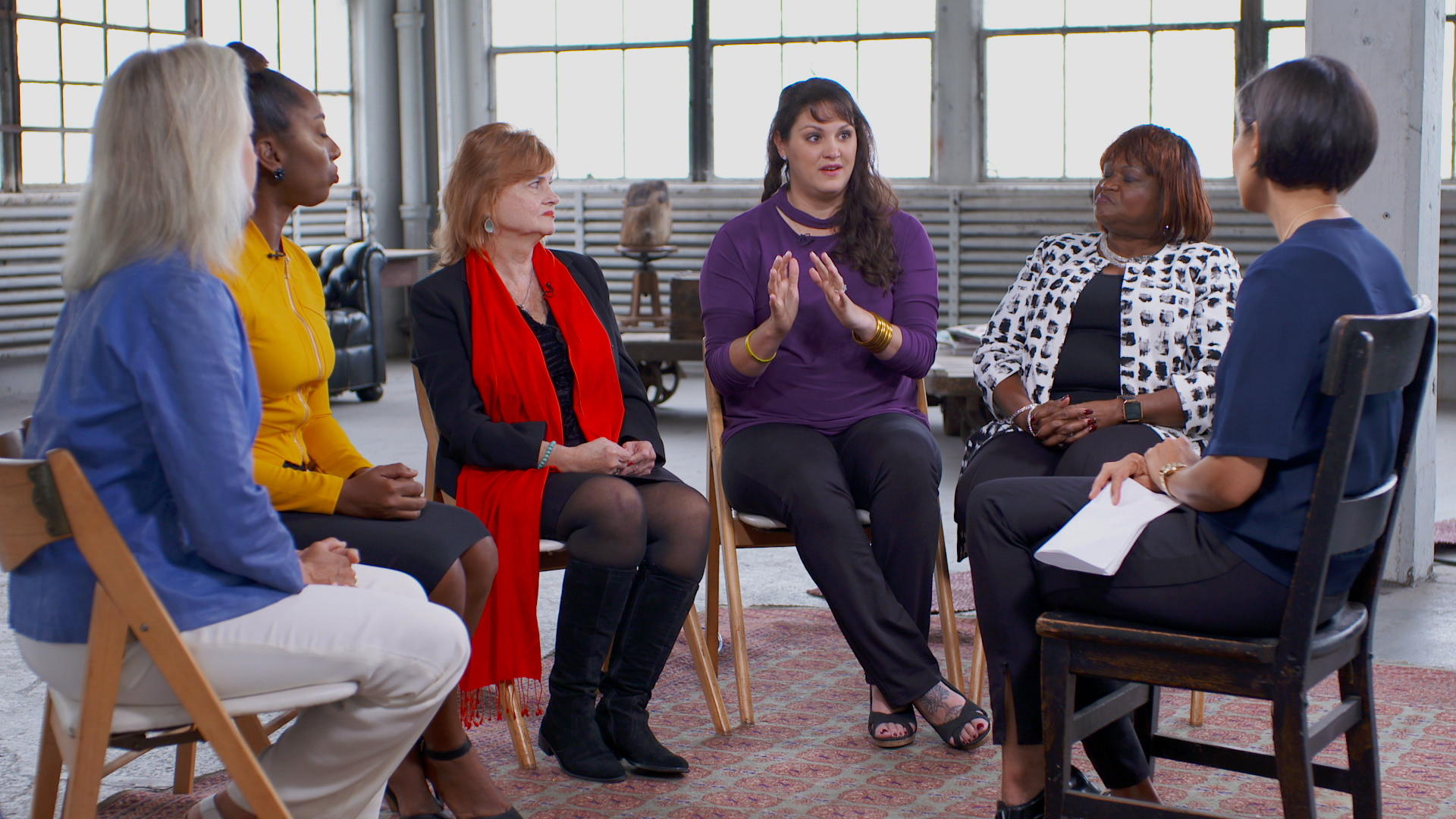 A United Nations study out this week finds domestic violence is one of the most common killers of women around the world. About 50,000 women were killed in 2017 by an intimate partner or family member, meaning an average of about 137 women are murdered every day -- by someone they know.

In the U.S. alone, an estimated one in four women is a victim of severe physical abuse. Domestic abuse is an epidemic "CBS This Morning" has been digging into for months. Earlier this year, we asked viewers to send in submissions for our series, Note To Self, and found close to 100 of those notes mentioned a history of domestic violence.

Two of those women are part of a group of five who sat down with CBS News' Alex Wagner to discuss their experiences. Leslie Morgan Steiner is a New York Times bestselling author; Lovern Gordon is the president of a non-profit; Rania Batrice served as Bernie Sanders' deputy campaign manager; Lisa Hurley worked for the U.N.; and Judy Freeman Chambers is a municipal judge. You can read an excerpt of their conversation below and watch it in the video in the above player.

The National Domestic Violence Hotline, 1-800-799-SAFE, has counselors live at all hours, 24/7. For more tips on how to get help or how to help someone you suspect may be a victim of domestic violence, scroll to the bottom of this article.

ALEX WAGNER: How many of you didn't realize it was happening at first?

LESLIE MORGAN STEINER: I mean, if you had asked me at the time, my husband was beating me on a regular basis. He had three guns that he kept loaded all the time. He pulled them on me, you know, on a very regular basis. And if you had asked me if I was a battered wife, I would've said, "No, I'm not. I'm a strong, smart, independent woman who's in love with a troubled man." …And I became increasingly ashamed that I loved him and that my love was making me vulnerable and making me go back again and again. And it wasn't until I became really convinced that he was going to kill me that I was able to leave.

WAGNER: A number of you feel like your abusers would have killed you?

STEINER: Oh, he would have killed me. There was no doubt.

WAGNER: Lovern, you have talked about the isolation, that your abuser made you choose between your family and him. How did that happen?

LOVERN GORDON: It was almost this Bonnie and Clyde mentality…That it's us against the world. Because that's what I was told over and over again….He became almost like my protector, right?... It's insane, the mentality that we have during the relationship, that we believe that there's nobody else. And I was ashamed.

RANIA BATRICE: Not very well….Working in a predominantly male environment, where I was constantly fighting for my seat at the table, where I was constantly fighting to be respected, I was terrified that someone would find out. And then the struggle, that I was already having to go through in my professional life, was just going to be that much worse.

WAGNER: At what point could you no longer keep it together?

BATRICE: Honestly, I don't know how long it would've lasted had one of my, she's a sister, she's my friend, but she really is my sister…She saw the bruises on me and she called me and said, "I know what's happening, and he's never going to touch you again."

STEINER: It's incredibly hard to leave somebody who has such a powerful psychological hold on you.

WAGNER: Well, it's not just psychological, right? I mean, Lisa, you endured a number of forms of abuse, including financial abuse, right?

LISA HURLEY: Yes, that's one thing I wanted to stress is the financial abuse….I mean, if you don't have a black eye, people think, "Oh, you really weren't abused."  You know, I think his jealousy, I thought at first was, you know, that he really cared. And then it just became a point where it was like he owned me. I really felt that he believed--

HURLEY: Exactly. His property, exactly….If I would try to go visit my family he would take my credit card out of my wallet. I had moved out of the house with my child....He was supposed to pay child support, pay the mortgage. He did neither for awhile.

WAGNER: During this time, because there's so much pressure on you, did you think, "Maybe I should just go back to him?"

WAGNER: You were resolute.

HURLEY: I was resolute.

WAGNER: How many of you questioned whether you had made the right decision at any point?

CHAMBERS: I went back.

WAGNER: Wait, you went back?

CHAMBERS: I went back the first time. My children were small. It was more physical then, than at the end – at the end it was more verbal. But I went back. I left him for a year and I said, "Well, if you promise not to hit me anymore, I'll come back to you."

WAGNER: Did you really think he was going to stop hitting you?

CHAMBERS: No, but I had to do something for my babies.

WAGNER: A lot of people hear stories of domestic abuse and they don't understand why you stayed. They keep asking the question, "Well, why did you stay?" How do we need to re-frame that question?

HURLEY: I think the question would be, "Why does he think he can do that and get away with it?"

GORDON: Correct....We tend to sometimes think that we let it happen….The first time he slapped me, I saw stars. That's how hard he slapped me and stormed out and I'm sitting there, and I asked myself that question. "How could you let this happen?"

WAGNER: But of course you didn't.

STEINER: Well, it's just so incredibly confusing to have love and violence go together.

BATRICE: It's also textbook too to say, they beat the crap out of you, and then for me, I know, I'm sure he would put then put his arms around me and say, "Stop crying, I'm here."

STEINER: So the person who damages you is also healing you.

WAGNER: Let me sort of ask one big question…But we are having this conversation against a much broader backdrop of accountability, sexual relations, sexual harassment, sexual predation, power….Are you all more optimistic that we can put an end to domestic violence, given the national conversation that we're having right now?

STEINER: I am so optimistic....Journalists are listening, the media is listening, police officers, the courts, law. It's not going to change overnight, but I am tremendously optimistic.

CHAMBERS: And I'm from a very small community…Some people are gonna say, "Why did you air your dirty laundry?" And I said, "If it saves one woman's life, then let the laundry hang out."

How to get help

The National Domestic Violence Hotline says the first step in getting out of an abusive situation is to have a safety plan: a plan to prepare to leave, a plan when you leave, and a plan after you leave. Also, it's important to reach out to someone, anyone. It doesn't need to be law enforcement, it could be a friend, a family member, or even a complete stranger.

The hotline has counselors live at all hours, 24/7. If you know someone in an abusive relationship, the counselors are also there to help you get that person to a safe place.

The National Domestic Violence Hotline website offers detailed information for those who need to make a safety plan whether you are living with an abusive partner, have kids, are pregnant or suffering emotional abuse. It also provides basic legal information about your rights, securing a restraining order and other places to find legal resources.

For friends and family who suspect a loved one is being abused, there are a list of warning signs to look out for and tips for how to help them.

Why In-N-Out will "never" franchise or go public