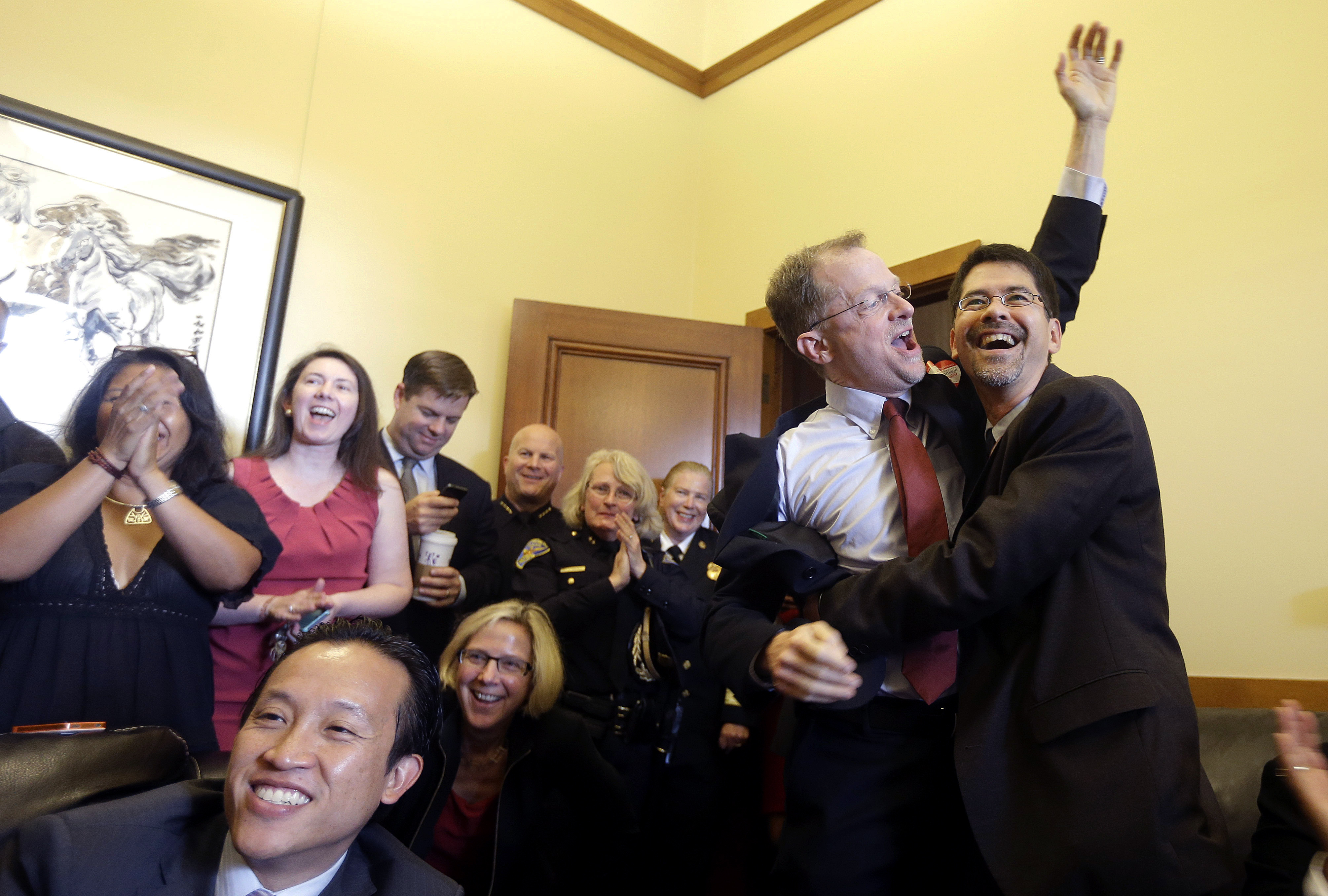 The dust is still settling after today's historic decision to strike down the Defense of Marriage Act, but that doesn't mean it's too early to start trying to sort out the implications of the decision. Among the biggest questions: Will the DOMA decision serve as a legal basis for efforts to legalize same-sex marriage in the 37 states that do not currently allow it?

"As Justice Scalia said in his dissent, this DOMA ruling can and will be used by gay Americans everywhere to fight discrimination," said attorney and Democratic strategist Richard Socarides. "That will clearly include new lawsuits in many states that don't have gay marriage now." (One note: The court's punt on California's Prop. 8, in the other gay rights decision today, will likely mean legal gay marriage in that state.)

Jonathan Rauch, a scholar at the Brookings Institution and author of a book arguing for same-sex marriage, disagreed with Socarides.

Wilson Cruz, a spokesman for the LGBT rights group GLAAD, said that while it is "premature" to answer the question definitively, the DOMA decision will move the debate in favor of same-sex marriage. "The first domino in this issue has fallen," he said, "and now we're going to see the rest of them fall by the wayside."

Hayley Gorenberg, deputy legal director of Lambda Legal, a legal organization supporting gay rights, agreed that if nothing else, the decision "adds fire to people's desire to challenge marriage barriers." While she did not point to a specific legal basis for such challenges, she added that "the fact that benefits are now available on a federal basis will be a factor in lawsuits."

DOMA was struck down on the basis of the equal liberty guaranteed by the Fifth Amendment. It's possible that the ruling could be combined with the 14th Amendment's "due process" clause to make the case for same-sex marriage in the states. As Tejinder Singh of SCOTUSblog pointed out, there was a split among the justices concerning whether the decision could be used to do so.

Jon Grenbaum, chief council of the The Lawyers' Committee for Civil Rights Under Law, points out that "[t]oday's decision does not directly address" whether the finding could be used to make a same-sex marriage case in the states. But indirectly, the decision suggests it would not. Justice Anthony Kennedy, writing for the majority, repeatedly stressed that states have the providence over defining marriage in the DOMA decision. The federal government, he indicates, needs to follow their lead - whether or not they have legal same-sex marriages.

DOMA, Kennedy writes, "singles out a class of persons deemed by a State entitled to recognition and protection to enhance their own liberty. It imposes a disability on the class by refusing to acknowledge a status the State finds to be dignified and proper." He adds that "[t]he state's power in defining the marital relation is of central relevance."

In an angry dissent, however, Justice Antonin Scalia suggested overreach by the court would have an impact on how states define same-sex marriage. The majority, he wrote, "has declared open season on any law that (in the opinion of the law's opponents and any panel of like-minded federal judges) can be characterized as mean spirited."

"[T]he real rationale of today's opinion ... is that DOMA is motivated by 'bare ... desire to harm' couples in same-sex marriages," he writes. "How easy it is, indeed how inevitable, to reach the same conclusion with regard to state laws denying same-sex couples marital status."

"By formally declaring anyone opposed to same-sex marriage an enemy of human decency, the majority arms well every challenger to a state law restricting marriage to its traditional definition," Scalia continues. "Henceforth those challengers will lead with this Court's declaration that there is 'no legitimate purpose' served by such a law, and will claim that the traditional definition has 'the purpose and effect to disparage and to injure' the 'personhood and dignity' of same-sex couples."