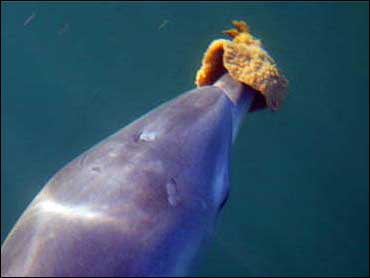 A group of dolphins living off the coast of Australia apparently teach their offspring to protect their snouts with sponges while foraging for food in the sea floor.

Researchers say it appears to be a cultural behavior passed on from mother to daughter, a first for animals of this type, although such learning has been seen in other species.

The dolphins, living in Shark Bay, Western Australia, use conically shaped whole sponges that they tear off the bottom, said Michael Kruetzen, lead author of a report on the dolphins in Tuesday's issue of Proceedings of the National Academy of Science.

"Cultural evolution, including tool use, is not only found in humans and our closest relatives, the primates, but also in animals that are evolutionally quite distant from us. This convergent evolution is what is so fascinating," said Kruetzen.

Researchers suspect the sponges help the foraging dolphins avoid getting stung by stonefish and other critters that hide in the sandy sea bottom, just as a gardener might wear gloves to protect the hands.

Kruetzen and colleagues analyzed 13 "spongers" and 172 "non-spongers" and concluded that the practice seems to be passed along family lines, primarily from mothers to daughters.

"Teaching requires close observation by the pupil," Kruetzen said. "Offspring spend up to four years before they are weaned, so they would have ample time to observe their mum doing it -- if she is a sponger."

"This study provides convincing evidence that the behavior is transmitted via social learning," commented Laela Sayigh of the University of North Carolina Center for Marine Science.

"Such social learning appears to be widespread among the Shark Bay dolphins," said Sayigh, who was not part of Kruetzen's team.

Only one male was observed using a sponge. Kruetzen noted that, as adults, male and female dolphins have very different lifestyles.

Adult males form small groups of two or three individuals that chase females in reproductive condition, he explained. "I would think that they do not have time to engage in such a time-consuming foraging activity as adults, as they are busy herding females."