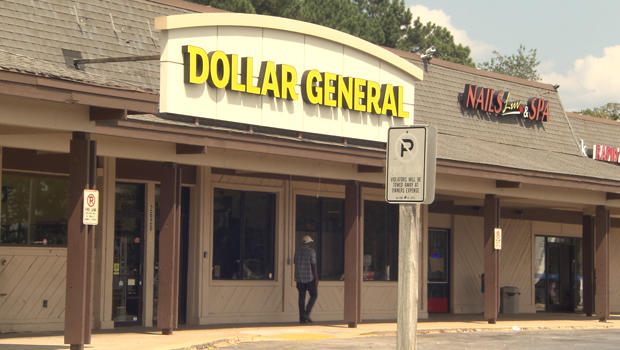 Moville, Iowa is part of the nation's breadbasket, so it's a bit of a surprise that it's not easy to buy fresh food in this town of 1,600.

In 2016, the discount retailer Dollar General opened next door to the local grocer. "When Dollar General first came in, right away our business probably dropped 15-20%," said Chet Davis. He's still in the grocery business. But he says his Moville location just could not compete. It's one example in a  nationwide controversy about the increasing influence Dollar Stores can have not only on where we shop, but also on what we eat.

Moville's Dollar General does not sell fresh fruits and vegetables or meats. But it does have lower prices on just about everything else.

Aubrey asked Davis, "Some people might look at this situation and say, 'Dollar Stores are selling what people want at cheap prices. That's competition – sorry'?"

"Yeah, but we're not talking competition where we're on an even playing field," Davis replied. "At the volume that they buy, you're under their thumb."

With the grocery closed, most of Moville now drives 30 minutes to Sioux City for a head of lettuce.

And down the road in Correctionville, the local grocer also closed after a Dollar General opened there, too.

In the struggle between Main Street and corporate America, the concern was once Wal-Mart. Today, the focus is on Dollar Stores. Consider this: there are now more Dollar Stores in the U.S. than Starbucks and McDonald's combined – 30,000 of them.

As many brick-and-mortar retailers struggle, Dollar Stores have quietly expanded to nearly every town in America. And bargain hunters love them.

"I'm just delighted – I get happy every time I come here," said one customer, Kimberly. "I'm like, 'Oh, somebody's going to change the price any minute now!'"

There are three major chains: Family Dollar (located mostly in cities); Dollar Tree (the only store where everything is actually $1); and Dollar General, now the largest retailer in the country when it comes to the number of stores – 16,000.

"Our stores have that option available to be able to run in, get it and really get out," said Dollar General spokesperson Crystal Ghassemi. She says in the last year they've added a thousand new stores, places where customers can buy two greeting cards for a dollar.

"Our core customer has about a $40,000 or less total household income," Ghassemi said. "And we know that they are shopping us from very rural areas to metropolitan areas all over the country."

Aubrey asked Barry Popkin, professor of nutrition at the University of North Carolina at Chapel Hill, "If you could talk to the executives of Dollar Stores, what would you say to them?"

He replied, "'Shame on you. You're killing America just so you can get richer.'"

"Yeah. They have a model that is a brilliant model to make quick bucks off the backs of our health," he said.

For years Popkin has warned Americans about the dangers of too much sugar and soda. Now, he is concerned about Dollar Stores.  At a time when poor diets are linked to nearly 900 deaths a day in this country, Popkin says to look at what Dollar Stores sell: rows and rows of sugary drinks, candies, and processed foods high in salt and fat.

"It increases their risk of heart disease, mortality, cancer mortality, diabetes, obesity," he said. "This is the worst food that they can be eating."

"So, is this exacerbating the health problems of the demographic that's shopping there?" asked Aubrey.

"Yes, it's adding to the health crisis that lower-income America faces – black, Hispanic, and white America all shop in these stores."

Consider Dekalb County, Georgia, near Atlanta, where there are a total of 68 Family Dollar, Dollar Tree, and Dollar General stores.

County Commissioner Lorraine Cochran-Johnson said 25% of Dekalb County live in a "food desert" –a low-income area with limited access to supermarkets. She worries there are just too many Dollar Stores in these neighborhoods. "They tend to highly saturate areas," she said. "When you look at the trends and you look at the pattern of growth of the Dollar Store as well as the areas that have the highest levels of obesity, hypertension, high blood pressure, there is a direct correlation. We see that in the data."

That's one reason why Fort Worth, Tulsa, Birmingham, New Orleans and Kansas City (among others) have already passed restrictions on where new Dollar Stores can open.

As you might imagine, Dollar Stores oppose these measures.

"Ultimately when you stifle competition, the customer hurts the most," said spokesperson Crystal Ghassemi. "And I think it gives us an opportunity to provide economic impact through jobs and to be able to really help the communities."

As for the impact the stores have on what we eat, the big three chains say they are not grocery stores.  But Chassemi says their stores do offer healthy options.

She and Aubrey toured the frozen food section of one store: "We've got frozen vegetables, we have all-natural chicken from Tyson's," Chassemi said.

"It goes back to the customers' choice to be able to make their decision," Chassemi said. "And we have the options that should they want to be able to eat healthfully, they can do so with Dollar General's help."

Dollar General is adding fresh produce to some of its stores, but so far that's only about three percent.

As for its competition, Dollar Tree (which also owns Family Dollar) declined our request for an interview, but in a statement point out they "complement and operate side-by-side with grocery stores."

Back in western Iowa, grocer Chet Davis has one last store open in the town of Kingsley. But it's unclear for how long.  Dollar General is building a new location there, too.

Aubrey asked, him, "Are you worried?"

"You are essentially asking people to come into your store and pay a little extra so that you can stay in business. Is that a hard sell for people in your community?"

"Well, that's definitely a hard sell, because everybody's trying to save some money," Davis replied. "It's up to the people of the community to really think hard and decide what they want. It's completely up to them."