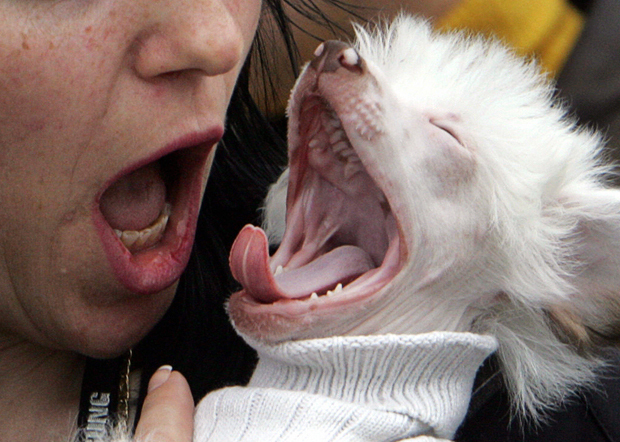 Dogs are a man's best friend, as the saying goes, and now, researchers say they have proof that just like friends, dogs are tuned into their owners' emotions. In a study published Wednesday in the open access journal PLOS ONE, University of Tokyo researchers say dogs are more responsive to their owners' yawns than to a stranger's yawn -- a sign that dogs are more empathetic than previously understood.

In the study, 25 dogs were observed in their owners' homes. Researchers recorded their responses to watching their owners yawn, then watching an unfamiliar researcher yawn. They yawned nearly fives times more often in response to their owners' yawns.

Earlier studies have shown that when humans yawn contagiously, or in response to another humans' yawn, it is a sign of empathy and social skills. On the flipside, people with empathy disorders, such as autism, are often not prone to contagious yawning.

The empathy and yawning link has previously been studied in chimpanzees, baboons and other primates. Human and animal studies have shown that when two subjects share a close social connection, contagious yawning is more frequent.

The link between yawning and empathy in dogs has previously been linked to anxiety or stress. In this study, lead researcher Teresa Romero and her colleagues measured heart rate throughout the experiment. The rates stayed consistent in response to the dogs' owners and strangers, indicating that stress is not a factor.

"Although our study cannot determine the exact underlying mechanism operative in dogs, the subjects' physiological measures taken during the study allowed us to counter the alternative hypothesis of yawning as a distress response," Romero said in a press release.