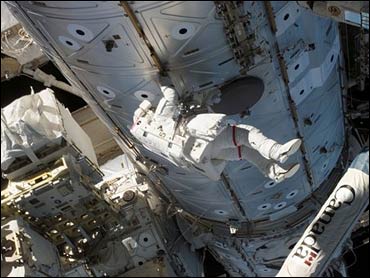 NASA managers remained "cautiously optimistic" that a deep gouge in the shuttle Endeavour's belly would not require spacewalking repairs but wanted to run one last test and double-check their data Thursday before making a decision.

Officials also were studying a rip in astronaut Rick Mastracchio's glove that brought Wednesday's spacewalk to an early end, and they were loathe to authorize another jaunt until they knew more. But they said those concerns would not stand in the way of crucial repairs.

"If we decided we needed to go do this, I would feel very comfortable doing it. We've done a lot of spacewalks without any glove problems," said John Shannon, the mission management team's chairman.

Endeavour's crew was to spend part of Thursday getting up to speed on what it would need to do if NASA officials order the repairs. Astronauts on the ground have been practicing the techniques so they can send the crew precise instructions and answer any questions.

Teacher-astronaut Barbara Morgan also planned to spend time Thursday speaking with students at the Challenger Center for Space Science Education in Virginia, which was founded by the families of the doomed shuttle's crew. Morgan was Christa McAuliffe's backup for the 1986 flight.

The chat was to be moderated by the commander's widow, June Scobee-Rodgers.

In a similar chat with students from the state of Idaho on Tuesday, Morgan demonstrated what it is like to exercise and drink in space and talked about what the stars look like from the shuttle.

NASA has spent nearly a week agonizing over the 3½-inch-long, 2-inch-wide gouge that resulted from a debris strike at liftoff. Part of the gouge, a narrow 1-inch strip, cuts all the way through the tiles, exposing the thin felt fabric that serves as the final thermal barrier to the ship's aluminum frame.

The exposed area and the gouge itself are so small that NASA is not worried about a Columbia-type catastrophe at flight's end. They are concerned, however, that the underlying aluminum structure might be damaged enough by the searing heat of re-entry to warrant lengthy post-flight repairs.

Officials have to balance those fears with the risk that astronauts wearing 300-pound spacesuits and carrying 150 pounds of tools could bang into the shuttle and cause more damage as they try to fix the gouge.

Putting the wrong amount of the caulk-like repair filler into the gash or failing to put it in exactly the right spot could make the problem worse, Shannon said.

The unprecedented patching job on Endeavour, if approved, would be performed on the next spacewalk, now set for Saturday, a day later than originally planned to give engineers more time to analyze the situation. That could keep Endeavour and its crew of seven at the space station at least an extra day.

Mastracchio likely would be assigned to the repair spacewalk, and he could use a spare glove he brought on board Endeavour.

The repair job would not be anywhere near where Mastracchio was Wednesday, when he and astronaut Clay Anderson moved two rail carts and an antenna base into new positions on the orbiting outpost. They also added new antenna parts to improve voice communications.

The next spacewalk will be trickier if shuttle repairs are ordered. Under the latest scenario, Mastracchio and another astronaut would apply black paint to the white gouge and squirt in the caulk-like filler, while balancing themselves on the end of the shuttle's 100-foot robot arm and extension boom.