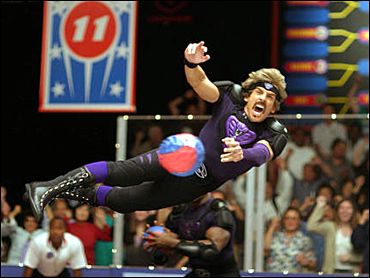 Stiller and Vaughn's "Dodgeball: A True Underdog Story" debuted as the weekend's top movie with $30 million, whipping Hanks and Spielberg's "The Terminal," which opened at No. 2 with $18.7 million, according to studio estimates Sunday.

"With a Spielberg and Hanks movie, we never thought we would be this far ahead. That's rarefied air," said Bruce Snyder, head of distribution for 20th Century Fox, which released "Dodgeball."

The weekend's other new wide release, Jackie Chan and Steve Coogan's "Around the World in 80 Days," came in at No. 9 with just $6.8 million for the weekend and $9.6 million since opening Wednesday.

"Dodgeball" stars Vaughn as a gym owner whose squad of geeks and losers tries to save their destitute health club in a dodgeball showdown against rival bully Stiller's team.

The movie's lowbrow humor — including a coach forcing his players to duck metal wrenches to hone their dodging skills — proved a stronger draw than the classy comedy "The Terminal," about an Eastern European stuck for months in customs limbo at Kennedy airport.

"It's really hard to beat a movie like `Dodgeball.' Everybody I talked with wanted to see it, even though they thought it looked really dumb," said Paul Dergarabedian, president of box-office tracker Exhibitor Relations.

"The Terminal" had the weakest opening among Spielberg's recent wide releases — "Catch Me If You Can," "Minority Report," "A.I. Artificial Intelligence" and "Saving Private Ryan." Those films all opened in the $30 million to $35 million range.

"Dodgeball" drew a young male audience, while "The Terminal" played mostly to older crowds less likely to rush out on opening weekend. DreamWorks, which distributed "The Terminal," hopes the film has staying power.

"Smart, high-concept movies can be a difficult sell, but they often have a long theatrical life," DreamWorks head of distribution Jim Tharp said.

Based on Jules Verne's adventure and featuring a cameo by Arnold Schwarzenegger, "Around the World in 80 Days" was produced by Walden Media, a family-entertainment outfit that is part of Denver billionaire Philip Anschutz's empire.

Disney acquired the movie, which became the latest in a string of duds from the studio this year, including "The Alamo," "Home on the Range" and "Raising Helen." The studio hopes to rebound with "King Arthur," "The Village" and "Princess Diaries 2: Royal Engagement" in July and August.

"Little streaks like this happen to everybody, but it's never about the short term," said Chuck Viane, Disney head of distribution.

After a monthlong surge, Hollywood's business dipped, with the top 12 movies taking in $126.9 million, down 10 percent from the same weekend last year.

Some of the previous weekend's new flicks tumbled. Vin Diesel's "The Chronicles of Riddick" fell from second place to seventh, taking in $8.3 million, down a steep 66 percent. Nicole Kidman's "The Stepford Wives" came in at No. 6 with $9.2 million, a 57 percent drop.

"Harry Potter and the Prisoner of Azkaban," the No. 1 film the previous two weeks, was No. 3 with $17.4 million. Its 17-day total of $190.3 million lagged about $10 million behind revenues for the franchise's last installment, "Harry Potter and the Chamber of Secrets," after 17 days.

"Shrek 2" was fourth with $13.6 million, pushing its total to $378.3 million and passing "The Lord of the Rings: The Return of the King" to become No. 6 on the all-time domestic chart.