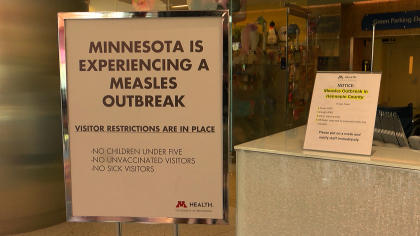 MINNEAPOLIS -- New numbers from the Minnesota Department of Health show the measles outbreak in the state is growing, CBS Minnesota reports.

There are now 44 cases reported in Minnesota, which is up from 41 on Thursday. The outbreak is primarily in the state's large Somali-American community, where many parents avoid the measles-mumps-rubella vaccine because of unfounded fears that it causes autism.

All but two of the cases involve unvaccinated patients.

"We're very early in the outbreak," said Dr. Shane McAllister, assistant professor in pediatric infectious disease and immunology at the University of Minnesota's Masonic Children's Hospital. "We're going to be seeing this for a while."

Preventing the outbreak's spread is a priority at Masonic Children's Hospital in Minneapolis. Signs stand near every entrance warning of the measles outbreak.

"There's a lot of interest in measles right now, so we're fielding a lot of questions from concerned families," McAllister said. "We have a large population of potentially-infectable children who are not vaccinated, and we have a disease agent that is extremely contagious."

Normally, the measles, mumps and rubella vaccine, or MMR, is administered at age 1 with a second dose between ages 4-6. But MDH accelerated its measles vaccination guidelines this week in three specific counties.

The new guidelines call for children in Ramsey, Crow Wing and Hennepin counties get the second vaccination just 28 days after the first dose.

"That provides additional protection for children who might not have responded to the first dose," McAllister said.

Unvaccinated children are most at risk outbreak, but certain adults could also become infected.

Measles vaccination guidelines changed from a single dose to a double dose in 1989.

"Adults who were born prior to the late 80s should consider speaking with their physician about getting a second dose of the MMR," McAllister said.

He points out the guidelines are not calling for an additional dose of the measles vaccine -- it is just an earlier dose.