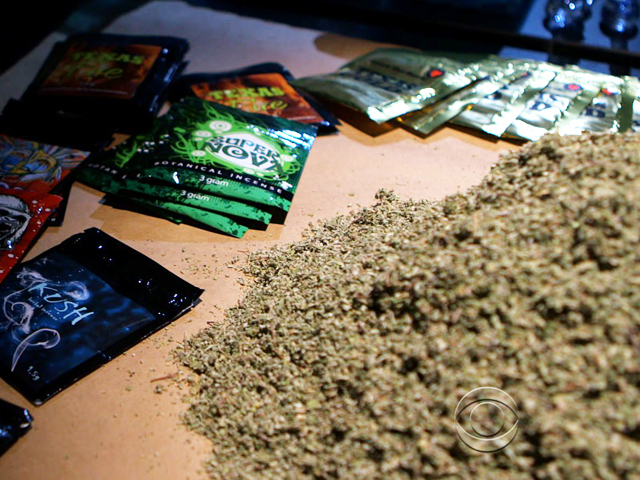 "Eight Ballz, K2, Spice," he says, listing the drugs he took. "One of the best was called WTF."

In the last year, the DEA seized more than 18 tons of synthetic drugs across the country. They're a new generation of drugs made from chemical compounds, but the police are hamstrung, because many of the chemicals are legal to import and to sell.

"I could just go into a smoke shop and get them legally over the counter. It's just like going and buying beer or buying cigarettes," Chris says. "You can get them, it's right there under the counter."

Asked to describe the worst experience he had, Chris says, "Extreme, vivid hallucinations, accompanied with the noise -- a screaming noise in your ear that just went on for hours."

"And I couldn’t move on the ground for hours, so I was like paralyzed, basically," he adds. "And as soon as I could get up, I started doing more."

Toxicologist Dr. Michelle Ruha says there are so many new synthetic drugs that scientists can't identify them.

"Patients will come in, they're severely agitated, we have to put them on a ventilator, we have to heavily sedate them," Ruha says. "And then when they recover, we will ask them what they took, they often don't know or they don't remember, and we find absolutely nothing in their system."

By some counts, there are now more than 200 different substances. Ruha's laboratory has to do the detective work so that she can treat patients who have overdosed.

"Every few months, it seemed like we were hearing about new ones, so it's just very rapid turnover, so you just can't seem to keep up with it," she says.

It sometimes takes months -- and several deaths -- before a dangerous new substance is identified and then banned by the U.S. government. By then, the dealers have changed the chemical formula to make a new drug that's legal, but by no means safe.

Asked whether part of the appeal for users is that many of the drugs are legal, Ruha says, "Patients have absolutely said to me, 'I didn’t think it was a big deal. It was easy to get, it was legal and I had no idea it was going to be so addictive and so dangerous.'"

The scientists can't keep up, and neither can the law. Everyone CBS News spoke with said the police and the courts are struggling to deal with these drugs, because new substances are emerging much faster than they can be banned.