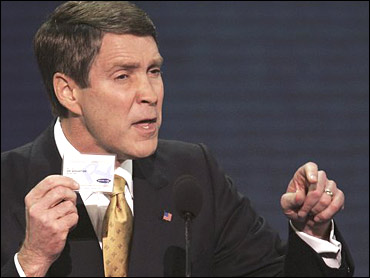 When physicians are elected to Congress, they tend to leave their white coats at home and reserve their expertise for questions on health care policy.

But as Congress debated whether to intervene in the right-to-die fight over Terri Schiavo, several of those doctors weren't shy about offering their opinions about the brain-damaged woman's medical condition based on records, reports and videos taken by her family.

At least three physicians in Congress — Sen. Bill Frist, and Reps. Dave Weldon and Phil Gingrey, Republicans from Tennessee, Florida and Georgia — disputed whether there was sufficient medical evidence to pull the feeding tube from Schiavo, allowing her to die.

By stepping into that discussion, some experts say, the physicians raise concerns in the medical community and potentially cross a hazy ethical line.

"It's disturbing that doctors who would never venture a comment about the health of anybody from a homemade video are sitting on the floor of Congress making declarations," said Art Caplan, chairman of the Department of Medical Ethics at the University of Pennsylvania's School of Medicine. "My own impression, from a distance, is that they've subverted what they know to be good medicine for the aim of achieving a political goal."

Schiavo was left in what court-appointed doctors called a "persistent vegetative state" after her heart stopped suddenly in 1990. But physicians on both sides of the fight to end her life have spent years disputing whether she has any chance of recovery.

As debate began last week over a bill that would let a federal court hear Schiavo's case, thereby extending her life, Frist, a heart-lung surgeon from Tennessee, questioned the diagnosis.

"I question it based on a review of the video footage ... And that footage, to me, depicted something very different than persistent vegetative state," Frist said last Thursday, explaining he had also spoken to members of Schiavo's family and neurologists who reviewed her case.

"For Senator Frist to say he could make a diagnosis based on the videotape certainly is not medically sound," Dean said. "I would not want my doctor making any diagnosis of me on videotape, and I'm speaking as a doctor."

But some of Frist's comments were also echoed on the House floor over the weekend. Weldon, an early sponsor of legislation to help Schiavo, is a physician specializing in internal medicine.

"By my medical definition, she was not in a vegetative state based on my review of the videos, my talking to the family, and my discussing the case with one of the neurologists who examined her," he said Sunday, adding that he tried unsuccessfully to visit Schiavo in person.

And Gingrey, who had an obstetrics and gynecology practice, contended Schiavo "responds to the people around her."

"The tragedy of this situation is that with proper treatment, now denied, Terri's condition can improve," he said Sunday.

Nick Smith, a spokesman for Frist, said the senator was only expressing his opinion. Spokespeople for both Weldon and Gingrey had similar responses, saying the congressmen were simply bringing their medical expertise to the discussion, not making a diagnosis.

"At no time, I think, were any of them trying to make a professional medical judgment," said Becky Ruby, Gingrey's communications director.

Rep. Vic Snyder, D-Ark., a family practice physician, did not comment on Schiavo's condition during the debate, but voted for the bill. He declined to second-guess his colleagues, saying many of them openly explained they had never seen Schiavo in person.

But he cautioned against giving too much weight to a doctor's opinion.

"I think we could make a mistake by thinking everybody with an MD somehow has all the answers in these situations," he said.

Rep. Joe Schwarz, R-Mich. — an ear, nose and throat surgeon — said he supported the bill because he found no medical reason for removing the feeding tube. He said Schiavo was not in any imminent danger of dying, did not have a terminal illness and has some cognitive ability.

"There's absolutely no indication under those circumstances, in my opinion, to remove her feeding tube," Schwarz said.

Twenty members of Congress worked in medicine, including doctors, dentists, nurses, veterinarians and other types of medical professionals.