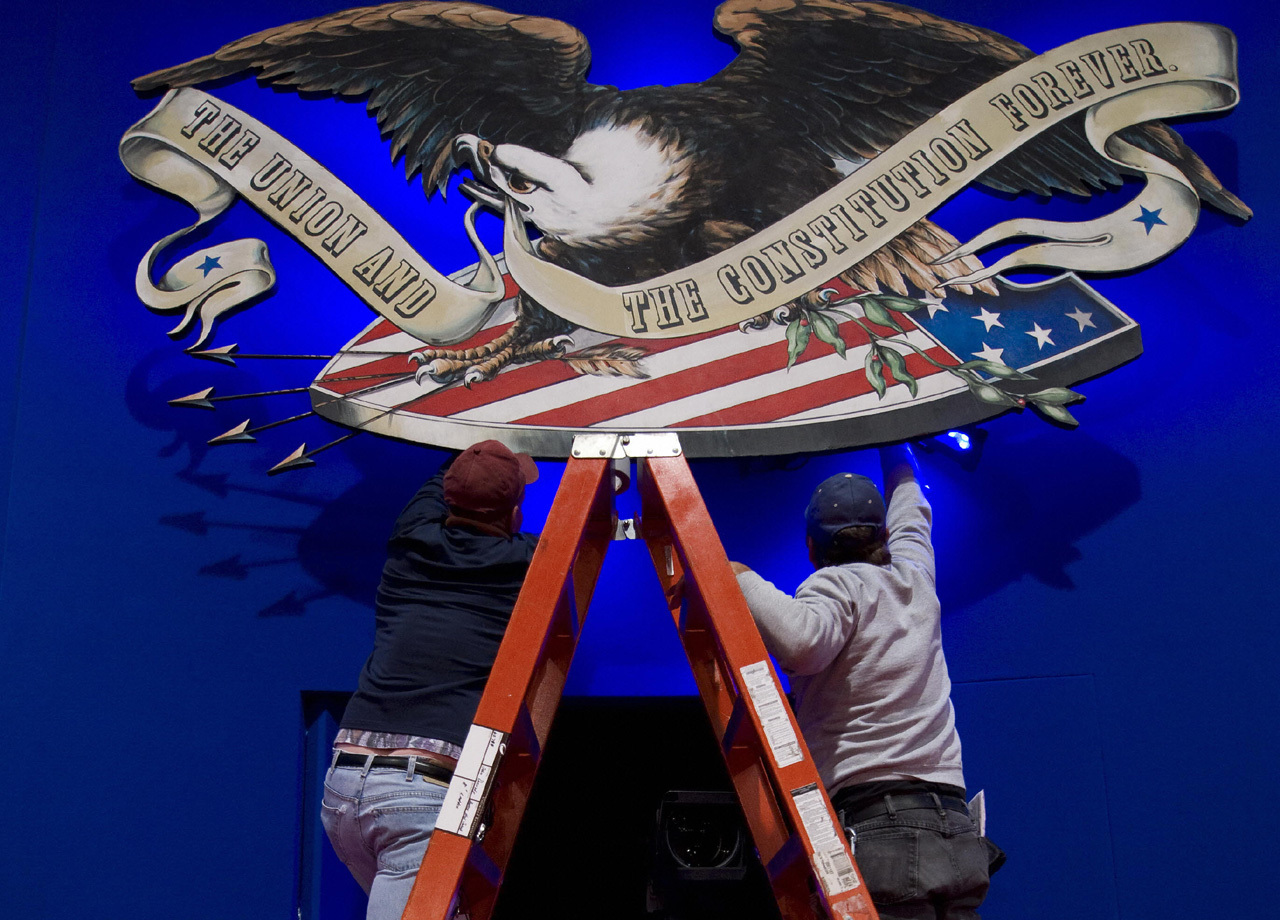 The presidential and vice presidential debates are sponsored by the Commission on Presidential Debates, a nonprofit corporation that mandates that a candidate have at least 15 percent support in national polls to participate. Since the CPD took over running the debates in 1988, only once has a third party candidate been allowed to participate: In 1992, when Ross Perot joined Bill Clinton and George H.W. Bush on the debate stage.

The dominance of the two major parties at the debates has critics charging that the system is effectively rigged to shut out other voices. Gary Johnson, the Libertarian Party nominee for president and former New Mexico governor, has sued on anti-trust grounds to be included this year. The CPD, he said in an interview, is designed "to protect the interests of Republicans and Democrats."

George Farah, the author of "No Debate: How the Republican and Democratic Parties Secretly Control the Presidential Debates" and the executive director of Open Debates, calls the 15 percent criteria "absurdly high," noting that candidates who reach five percent support qualify for public funding if they reached five percent support in past elections.

"Third parties have played a critical role in raising issues that are critical to the conversation in this country," he said, pointing to the abolition of slavery and the creation of Social Security and public schools. "When you exclude them from the debate, you have a sort of ideological containment."

A little history: The first televised presidential debates, between John F. Kennedy and Richard Nixon, came in 1960. They were sponsored by the major networks, including CBS News. Presidential debates were next held in 1976, with the League of Women Voters in charge; they sponsored the next two sets of debates as well, before the CPD took over in 1988.

Critics of the current system point to the League of Women Voters as an ideal debate moderator, arguing that it was more willing than the CPD to stand up to the parties. In 1980, Jimmy Carter strongly opposed the inclusion of independent candidate John Anderson, who had polled as high as 26 percent, in the debates. (Anderson would ultimately finish with less than 7 percent of the vote.) The League decided to include Anderson anyway, prompting Carter to drop out of the debates and leaving Anderson alone to debate Ronald Reagan. In 1984, the League held a press conference lambasting Reagan and Walter Mondale for rejecting dozens of potential debate moderators.

In an interview, Anderson said the debates are now "pretty well locked into the maintenance of a two-party system."

"Very clearly, the present system is wrong in my humble judgment in that it excludes the possibility that there could rise up a reasonable and probably candidate from someone other than one of the major parties," he said.

In addition to meeting the 15 percent threshold "as determined by five selected national public opinion polling organizations," the CPD mandates that candidates be Constitutionally eligible to be president and be on the ballot in enough states that it is mathematically possible to win the presidency. Alan Schroeder, a professor at Northeastern University and an expert on presidential debates, says the 15 percent threshold is reasonable.

"I don't think it's inconceivable at all that a popular candidate who's caught the popular imagination could exceed 15 percent in the poll standings," he said. "Now more than ever, when you have more non-affiliated voters than ever, that possibility exists."

Newton Minow, a member of the CPD and the former chairman of the Federal Communications Commission, added that the threshold keeps the debates from becoming a free for all.

Farah dismisses that argument. He says the rules for access should be that in addition to being Constitutionally eligible and on enough state ballots to win the presidency, a candidate have five percent support or have polls show that a majority of Americans want him or her in the debates.

Buchanan, who finished in fourth place in the 2000 presidential race and won four states when he ran in the Republican primary in 1992, told CBS News that the system as it now stands amounts to a "monopoly" maintained by the major parties.

"It's an instrument of the two political parties to ensure that the presidency is passed back and forth between them," he said. "The very fact that this duopoly can keep you out of the debates means you don't play in the Super Bowl."

Libertarian candidate Johnson, who is on the ballot in most states and has exceeded five percent in a few polls, argues that his exclusion from the debates is one part of a larger system designed to keep third party candidates marginalized. He and Farah point to "herculean structural barriers" for non-major party candidates, including higher barriers for ballot access and scant press coverage. On October 23, Johnson is participating in the "Free and Equal Debate" with Green Party candidate Jill Stein, Constitution Party candidate and former Congressman Virgil Goode, and Justice Party candidate Rocky Anderson, the former mayor of Salt Lake City.

"Despite the fact that 40 percent of the country is independent and hungry for an alternative, third parties face herculean structural barriers," said Farah. He argues that "because of this fraudulent commission, the candidates can exclude the third party voice and the commission takes the heat."

When it was created for the 1988 campaign cycle, the CPD was undeniably tied to the Republican and Democratic parties. The League of Women voters was once again clashing with the candidates, accusing the George H.W. Bush and Michael Dukakis campaigns of trying to "perpetrate a fraud on the American voter" by agreeing behind closed doors to conditions for the debate (including format and questions) and presenting the document to the League.

The League's decision to drop its sponsorship gave rise to the CPD, which was initially chaired by the former heads of the Democratic and Republican parties. Today, the co-chairman are Frank Fahrenkopf, Jr., the former chairman of the Republican National Committee and the president and CEO of the American Gaming Association, and Democratic strategist Michael McCurry, who was White House press secretary under President Bill Clinton.

Despite its leadership, backers of the CPD say, the organization has shown that it is not in thrall to the major parties. Minow, who authored a New York Times op-ed defending the CPD, points to the group's 2004 rejection of a "memorandum of understanding" concerning the debate details and its refusal in 2008 to delay the debates at the request of Sen. John McCain, who cited the financial crisis as the reason for his request. (The CPD hasn't always stood its ground: In 1988, it agreed to demands from the campaigns that two debates be held instead of three, and in 1992 it had to scramble to meet the conditions set forth by the major parties, who worked out a deal with no one from the CPD present.)

"I'm very proud of the commission," he told CBS News. In his op-ed, Minow described the debates as "the one time when the major candidates appear together side by side under conditions they do not control." A representative for the CPD did not respond to multiple requests for an interview with CPD executive director Janet Brown.

Schroeder, the debate expert from Northwestern University, said that it's "inevitable" that the commission would have a relationship with the major parties. "But is it collusion? I don't think so," he said. Schroeder says the CPD allows private agreement between the two parties, though he said the negotiations this year were informal and the agreements do not cover what questions will be asked.

Farah wants to see the CPD replaced by a citizens' debate commission made up of civic leaders that would be "genuinely nonpartisan" and not be funded by corporations. Under the CPD, the debates are sponsored by Anheuser-Busch Companies and other corporations and foundations. He also dismisses concerns that if third party candidates are allowed to participate, the major party candidates may choose drop out - as Carter did in 1980 - potentially depriving the American people of one of their few chances to see the major candidates in a relatively unfiltered setting.

"At this point in history, a candidate cannot avoid an actual presidential debates without appearing to be totally cowardly," he said. "So the public has leverage."

Buchanan said that the requirements of the CPD mean that "it's enormously difficult for a third party candidate to make it unless he has an enormous amount of money or is an extraordinarily popular figure."

Buchanan pointed approvingly to the practice in some European countries of holding debates with many candidates before whittling the debates down to the frontrunners. He said that the debate format and other barriers for third parties mean that the "anti-interventionist" perspective popular with a significant portion of the American public is not a part of the presidential conversation.

"If you can get these views to the American people, we can change American politics," he said.

"You would have a greater influence by third parties that represents points of view that the country really wanted, and you could force the major parties to adjust to them," he said.