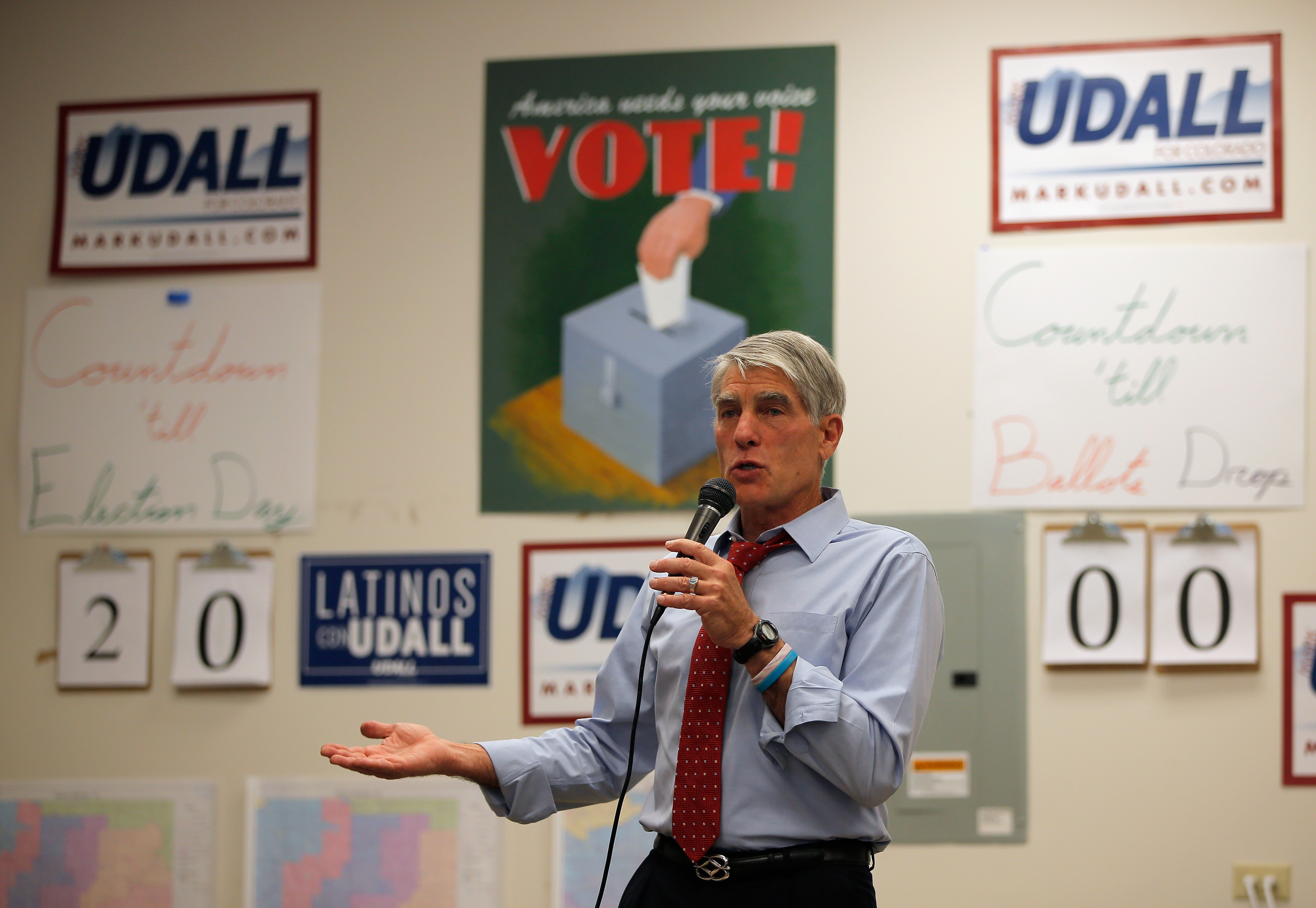 Since President Obama trounced former GOP nominee Mitt Romney among Latino voters, 71 to 27 percent, in 2012, many a political prognosticator has warned that Republicans would be doomed in future national elections if they did not take steps to win over the Hispanic community.

That could be true in 2016, but as far as the 2014 midterm elections go, there are only a handful of competitive elections in states where Latinos have a large enough presence to make an impact.

One of those states is Colorado, where Latinos make up 15.4 percent of the eligible voting population, according to 2013 American Community Survey statistics analyzed by the polling firm Latino Decisions. They played a pivotal role in electing Michael Bennet, one of the state's two Democratic senators, in 2010, a year when Republicans swept elections across the country.

Bennet captured 81 percent of the state's Latino vote in 2010, in part because he supported immigration reform. It's an issue in the forefront of Hispanic voters' minds this time around with 51 percent of registered voters calling immigration the most important issue of the 2014 election in a Latino Decisions survey out this week.

Latinos are frustrated with both Democrats and Republicans on the issue of immigration, although that frustration runs deeper with the GOP. But more than half of registered Hispanic voters (53 percent) said that they feel the Democratic Party takes Latino votes for granted, while it has failed to stand up for immigrants. Just over a quarter (8 percent) feel Democrats are truly committed to the rights of immigrants.

Still, Sen. Mark Udall, D-Colorado, who's fighting for re-election against Republican Rep. Cory Cardner, has been wary of doubling down on immigration as a campaign issue. He did release a statement disagreeing with President Obama's decision to delay executive action on immigration reform until after the midterm elections, but otherwise has been silent.

"He has completely run away from the issue and I think that is a big mistake," Matt Barreto, the co-founder of Latino Decisions, told CBS News.

"A lot of Democrats, they get cold feet and they think the Republican is going to say something about amnesty," Barreto added. "In Colorado people are not rabid anti-immigrants like they are in other states because they have always had a Hispanic population there for the last 200 years, and while there are conservatives on the immigration issue, the average middle-of-the-road voter is open- minded on immigration."

Though Gardner has been broadly supportive of the idea of immigration reform in Congress, Latino groups have hammered him over the past year for failing to sway his Republican colleagues.

A mid-October poll from the Denver Post actually showed Udall losing to Gardner among Hispanic voters, 35 percent to Gardner's 49 percent. Barreto criticized the poll as "100 percent wrong," saying it was "impossible" that Gardner was beating Udall among Latinos.

He took issue with the fact that the poll relied on only several dozen Hispanic voters who had landline telephones and was conducted entirely in English, which produces a sample that is much more conservative and assimilated than the average Hispanic voter in the state, who uses a cell phone rather than a landline phone and is likely younger and more Democratic-leaning. Barreto believes Hispanic support for Democrats in Colorado is considerably higher, and suggests that alloting Udall Hispanic support closer to the numbers that Bennet and Mr. Obama received could result in as much as a four-point bump - possibly enough to overcome the single-digit lead Gardner has had in many recent polls.

It wouldn't be the first time there was an Election Day surprise prompted by polls that undercounted the effect of the Latino vote: Barreto said both Bennet and Senate Majority Leader Harry Reid, D-Nev., won races that polls showed they should have lost, largely because predictions about the Hispanic vote were off.

Turnout is the key, though. Like voters of all races and ethnicities, Hispanics tend to turn out in lower numbers during midterm elections - though their drop in participation is often even more dramatic. Their national turnout in the 2010 midterms was just 31.2 percent, compared to 44 percent of black voters and 48.6 percent of white voters, according to a Pew Research Center analysis.

In the 2010 election, however, Colorado was the exception to the drop off in Hispanic turnout. In that midterm, 67 percent of registered Latino voters showed up at the polls, compared to just 60 percent nationally. This year, several Latino and Democratic groups have dispatched organizers to the state to boost voter registration even more. Combined with the organization left behind by Bennet and Mr. Obama, that could translate into more votes for Udall - and for Gov. John Hickenlooper, the state's Democratic governor who also faces a competitive election.

Outside of Colorado, Latinos will have far less influence. In other states that feature competitive Senate elections, they represent less than 7 percent of eligible voters. In Kentucky, they comprise just 1.5 percent of the eligible voting population.

The New York Times concluded earlier this week that Republicans would hold the House of Representatives and have a real chance to retake the Senate even if they lost every Hispanic voter in the country during the 2014 elections. That's because they live in places with largely uncompetitive elections, especially in states that could determine control of the Senate: more than two-thirds of eligible Hispanic voters live in California, Texas, Florida, New York, Arizona and Illinois, according to Pew. They also found that a full 96 percent of eligible Hispanic voters live in districts without a close congressional race (the same is true of 97 percent of all eligible voters).

In some states, like Kansas, where Latinos make up 6.1 percent of eligible voters, or Georgia, where they are 4 percent of the eligible voting population but a growing presence overall, campaigns aren't accustomed to competing for their votes, Barreto said. But Western Kansas is heavily dependant on Hispanic labor to keep farms and other agricultural operations running - perhaps the reason independent candidate Greg Orman indicated he agreed with the Senate-passed immigration reform bill in a debate earlier this month (his opponent, incumbent Republican Sen. Pat Roberts, voted against it).

There will also be a greater opportunity for Latinos to be heard in competitive governors' races, including the one in Colorado. And in Florida, where Republican-turned-Democrat Charlie Crist is challenging Republican Gov. Rick Scott, Latinos represent nearly one in five eligible voters.

The Florida Hispanic population once tilted heavily Cuban, a population that has mostly voted Republican over the years. But that population has been aging, and its numbers are fairly static. The non-Cuban population has been growing thanks to an influx of Hispanics from Colombia, the Dominican Republican, Mexico, and Puerto Rico - whose residents have U.S. citizenship and can vote right away.