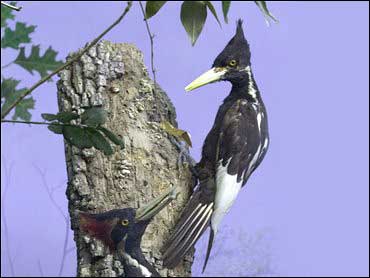 Recordings of the ivory-billed woodpecker's distinctive double-rap sounds have convinced doubting researchers that the large bird once thought extinct is still living in an east Arkansas swamp.

Last month, a group of ornithologists had questioned the announcement made in April of the rediscovery of the ivory-billed woodpecker, last sighted in 1944. They said blurry videotape of a bird in flight wasn't enough evidence. So a Cornell University researcher who was part of the team that announced the bird's rediscovery last spring says his group sent the doubters more evidence.

"We sent them some sounds this summer from the Arkansas woods," said John W. Fitzpatrick, director of the Cornell ornithology lab. "We appreciate their ability to say they are now believers."

The doubters had prepared an article for a scientific journal questioning whether the bird had really been found. They now plan to withdraw the article, according to ornithologist Richard Prum of Yale University, one of the doubters.

Prum said Tuesday he was particularly convinced by the Cornell researchers' two recordings of a series of nasally sounds that the ivory bills make and an exchange of double-rap sounds between two birds. He said the sounds matched recordings made in the 1930s in Louisiana.

"It's really on the basis of the new evidence that we've become convinced that the ivory-billed woodpecker exists," Prum said in a telephone interview.

The recordings seem to indicate that there is more than one ivory-billed woodpecker in the area.

"The bird that we saw had to have a mommy and a daddy," said Scott Simon, director of the Nature Conservancy in Arkansas. "We have solid evidence for one. We believe there are more."

Ornithologists announced in late April that an ivory-billed woodpecker was living in a swamp in the Cache River National Wildlife Refuge in eastern Arkansas. A Hot Springs kayaker had seen the bird a year earlier.

But Prum and fellow bird experts at Kansas and Florida Gulf Coast universities last month questioned the evidence, saying it was only strong enough only to suggest the possibility that the bird was present, not proof.

Another of those experts on Tuesday agreed with Prum.

"We were astounded. Yes, I totally believe, thank goodness, there are ivory bills," Mark Robbins of the University of Kansas said in a telephone interview. "We are ecstatic. Once everybody hears these vocalizations, you can't help but be convinced."

The Cornell ornithologists made 17,000 hours of recordings, using equipment set out in various places near the Cache and White rivers in Arkansas last winter.

One portion of the tapes has a distant double-rap, followed closely by a double-rap that is very close.

"It's communication typical of the ivory-billed. It's one of the more exciting cuts from the tape," Fitzpatrick said.

He said the audio had only recently been discovered on the tapes, which are being analyzed with computer assistance.

When the ornithologists announced in April that the bird had been found, the audio had not been reviewed closely enough, Fitzpatrick said. "We thought it was premature in April to publish the analyses."

The Cornell researchers plan to release the audio publicly at the American Ornithologists' Union in Santa Barbara, Calif., Aug. 23-27.