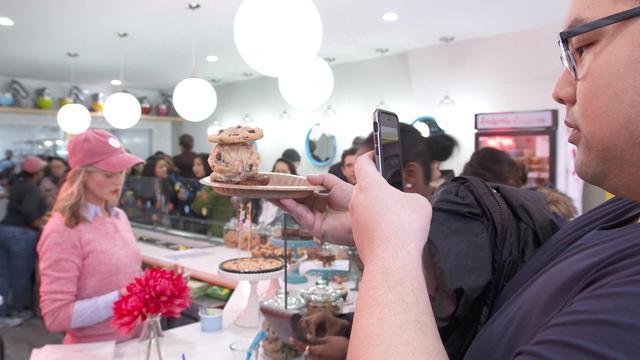 A new dessert shop in New York City specializes in a guilty childhood treat that we’ve been told could be dangerous to eat, reports CBS News correspondent Tony Dokoupil.

Dō, as it’s called, is a brand new bakery of sorts, only it doesn’t have much use for baking. Its specialty, as the name implies, is cookie dough.

In a gleaming kitchen, Kristen Tomlan makes chocolate chip cookies the old-fashioned way — except for the part where you put them in the oven.

Tomlan, who started baking with her Easy-Bake Oven as a little girl, is the founder of Dō – a specialty shop devoted to the glories of raw, edible cookie dough. Dokoupil got a taste.

“Why do you think cookie dough deserves a shop of its own?” Dokoupil asked.

“Because it is a lot of people’s obsession and it’s been a secret obsession for a long time,” Tomlan said.

Ben & Jerry’s helped bring cookie dough into the mainstream back in 1984 by adding it to ice cream. Tomlan got the idea for her shop after she and some friends bought a tub of cookie dough meant for baking.

“So we were sitting in the car, passing this tub of cookie dough around. And I said ‘Why is this not a thing where you can go into a shop and buy cookie dough and not feel bad about having to sneak it and sit in a car and eat it?’” Tomlan recalled.

The truth is, in many cases licking the spoon can be risky. Both raw eggs and flour can harbor bacteria.

But Tomlan said her dough is completely safe. She uses a pasteurized egg product and the flour is heat treated.

“The only risk is that you become addicted to it,” Tomlan said.

“It’s not totally surprising to me that a store selling only cookie dough is opening in New York,” said Julia Kramer, senior editor of Bon Appetit magazine.

“There is no one who would say ‘I don’t like cookie dough.’ It is just sort of the universal taste of childhood,” Kramer said.

To Kramer, the rise of specialty sweet shops – featuring treats like cupcakes or pies – is just history repeating itself.

“I’m obsessed with cookie dough so I was like, ‘I have to go,’” said one Dō customer.

But Tomlan does offer another option. Some of her cookies are fully baked.

“Wait, but aren’t you cannibalizing one customer base in order to feed the other?” Dokoupil asked.

“No, I think I’m liberating them to really indulge and eat cookie dough however they want to,” Tomlan said.

Writer: LBJ changed "in a moment" after JFK death

Lil Nas X opens up about coming out