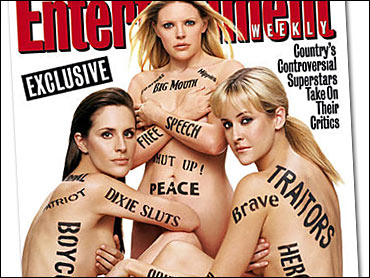 A sold-out crowd cheered, danced and sang along during the Dixie Chicks' summer tour kick-off concert, showing little concern for the controversy that has surrounded the band since a member criticized President Bush over the war with Iraq.

The show Thursday marked the first time the group had performed in the United States since lead singer Natalie Maines told a London audience on March 10: "Just so you know, we're ashamed the president of the United States is from Texas."

The comment was made as war was looming with Iraq, and Maines later apologized. But her remark brought the group a flood of criticism and media attention.

Thursday night, the Dixie Chicks quickly realized their fans still loved them as about 15,000 packed the Bi-Lo Center for the sold-out concert. If there was a boo as the band appeared on stage, few could hear it.

"I think it's a good idea if we start every single tour right here," Maines said. "Y'all have been an awesome crowd."

Maines didn't wait long to address the problems that have arisen from her comments. "We have a plan for this," Maines said. "If you're here to boo, we welcome that. We're going to give you 15 seconds to do that."

And when Maines counted to three, the sold-out crowd erupted in cheers and the Chicks broke into "Long Time Gone."

Although Maines apologized for her remarks, sales of the latest Dixie Chicks' album "Home" dropped sharply and many country radio stations pulled their music from their playlists. In recent interviews, the trio has said their lives, and the lives of their families, have been threatened.

But Thursday seemed to be nothing but fun.

"They said you might not come, but we knew you would," said Maines, as fans whistled and pounded the backs of their seats.

"I loved it," said Leigh Anne Stephens, 23, of Charlotte, N.C., decked out in a cowboy hat and a Dixie Chicks T-shirt.

Maines mentioned Mr. Bush just once, right before the band started its encore. "They just told me that the president has announced that the war is over," said Maines, referring to his speech aboard an aircraft carrier earlier Thursday night.

Before the concert, about 15 protesters milled outside the arena, carrying sings saying "The three French hens" and "Nothing Dixie about these Chicks."

But maybe most of the anti-Dixie Chick crowd was at the Marshall Tucker Band show, the alternative concert held 30 miles away in Spartanburg.