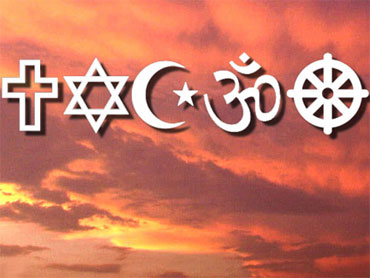 A new survey of Americans' knowledge of religion found that atheists, agnostics, Jews and Mormons outperformed Protestants and Roman Catholics in answering questions about major religions, while many respondents could not correctly give the most basic tenets of their own faiths.

Forty-five percent of Roman Catholics who participated in the study didn't know that, according to church teaching, the bread and wine used in Holy Communion is not just a symbol, but becomes the body and blood of Christ.

More than half of Protestants could not identify Martin Luther as the person who inspired the Protestant Reformation. And about four in 10 Jews did not know that Maimonides, one of the greatest rabbis and intellectuals in history, was Jewish.

(Scroll down to watch video by Byron Pitts.)

The survey released Tuesday by the Pew Forum on Religion & Public Life aimed to test a broad range of religious knowledge, including understanding of the Bible, core teachings of different faiths and major figures in religious history. The U.S. is one of the most religious countries in the developed world, especially compared to largely secular Western Europe, but faith leaders and educators have long lamented that Americans still know relatively little about religion.

Greg Smith, who co-authored the survey, told Pitts, "the three groups that really come out on top of this survey are atheists and agnostics, Jews along with Mormons." Smith added, "at the bottom are mainline Protestants, Catholics and those who describe their religion as just nothing in particular."

Respondents to the survey were asked 32 questions with a range of difficulty, including whether they could name the Islamic holy book and the first book of the Bible, or say what century the Mormon religion was founded. On average, participants in the survey answered correctly overall for half of the survey questions.

Not surprisingly, those who said they attended worship at least once a week and considered religion important in their lives often performed better on the overall survey. However, level of education was the best predictor of religious knowledge. The top-performing groups on the survey still came out ahead even when controlling for how much schooling they had completed.

On questions about Christianity, Mormons scored the highest, with an average of about eight correct answers out of 12, followed by white evangelicals, with an average of just over seven correct answers. Jews, along with atheists and agnostics, knew the most about other faiths, such as Islam, Buddhism, Hinduism and Judaism. Less than half of Americans know that the Dalai Lama is Buddhist, and less than four in 10 know that Vishnu and Shiva are part of Hinduism.

The study also found that many Americans don't understand constitutional restrictions on religion in public schools. While a majority know that public school teachers cannot lead classes in prayer, less than a quarter know that the U.S. Supreme Court has clearly stated that teachers can read from the Bible as an example of literature.

"Many Americans think the constitutional restrictions on religion in public schools are tighter than they really are," Pew researchers wrote.

Reverand Nancy Lane, associate pastor at Roswell United Methodist Church in Atlanta told Pitts that faith without knowledge can be dangerous. "Somehow we have diluted down the Gospel message where people have become more takers than mutual givers," Lane said.

The survey of 3,412 people, conducted between May and June of this year, had a margin of error of plus or minus 2.5 percentage points, while the margins of error for individual religious groups was higher.