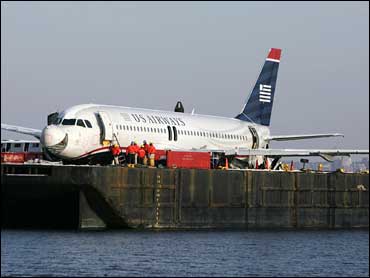 Update, 3:50 p.m.: The AP reports that divers have found the engine from US Airways jetliner that crash-landed in the Hudson River last week.


Investigators are confident that sonar has located the missing engine from US Airways Flight 1549 in about 60 feet of water very near the crash site in the Hudson River.

New York Police Department divers are hoping to to enter the water near West 52nd Street this afternoon in order to make a visual confirmation. If the object is identified as the left engine from the airplane, the National Transportation Safety Board and contractors will then raise it from the river floor.

Sources say all of the evidence examined so far corroborates the pilots' claims that the plane lost power in both engines after flying through a flock of large birds, possibly Canada geese. The recovered Flight Data Recorder recovered from the plane shows a nearly simultaneous loss of power on both sides.

A preliminary examination of the still-attached right engine shows what looks like organic matter and some physical damage consistent with bird ingestion.

In interviews with crash investigators, the pilots said the large birds seemed to appear in a long-line formation. Air traffic controllers say they saw unidentified targets on their scopes which they took to be birds. Federal investigators are still studying the radar tapes and say the images are not really definitive.

It also turns out that the pilots on Flight 1549 did not throw the so-called "ditch-switch," designed to seal the plane's belly and make it more buoyant after a water landing. Investigators say the pilots were properly working their way down the ditching check-list and simply did not have time to engage the switch before impact. Despite that, the plane remained afloat for a long period of time, and only took on considerable water when one of the passengers mistakenly opened a rear escape door.

Investigators are aware that the same aircraft suffered a so-called compressor stall on one of its engines just two days before the crash landing. But, there is no evidence that the stall, which is a momentary disruption of air-flow through the engine, had anything whatsoever to do with the ditching.

There are no plans to re-interview the pilots or the flight attendants at this time, but the NTSB reserves that right, if the evidence requires a follow-up.