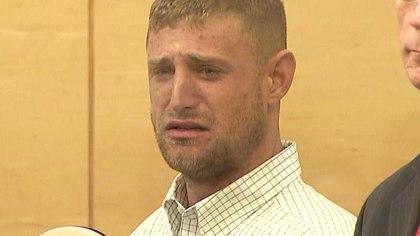 CHELSEA, Mass. -- The husband of a Massachusetts elementary school teacher has pleaded not guilty to killing her in their home.

Sobbing family members reportedly filled the courtroom as Andrew MacCormack was arraigned Wednesday in Chelsea District Court on a murder charge. He was ordered held without bail and cried in court during the hearing.

Prosecutors allege MacCormack, 29, killed 30-year-old Vanessa MacCormack in their Revere home on Saturday. They say he then withdrew $100 out of an ATM, bought cocaine with the couple's baby in the car, and returned home, where he allegedly tried to clean up the scene before calling 911.

The medical examiner's office has found that Vanessa MacCormack suffered blunt force injury to the head, sharp force injuries to the neck and asphyxiation. Prosecutors say she was found strangled with a trash bag over her head.

Police found the bathroom had been cleaned with bleach, reports CBS Boston.

Prosecutors allege the couple's marriage was falling apart because of Andrew MacCormack's expensive drug problem, and Vanessa MacCormack had recently been talking about divorce, the station reports.

Before the slaying, Andrew MacCormack had allegedly fueled his drug habit by taking money from their bank accounts and blaming hackers or selling jewelry while claiming it was stolen from their house, the station reports.

Prosecutors say text messages show that the couple had recently argued about finances.

"The texts back and forth show that very recently Vanessa was enraged at the defendant for botching their finances, for being irresponsible, according to her," a prosecutor said.

Andrew MacCormack's attorney says someone else killed the victim and police were too quick to blame the husband.

"His DNA and his fingerprints are going to be all over the house. So why would he be bleaching the house? I think it's a lot more likely that an assailant from outside the home bleached the house," the attorney said.