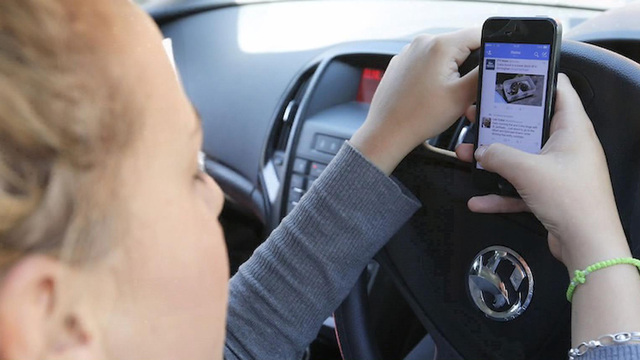 A new survey reveals drivers are ignoring warnings about the risks of distractions behind the wheel, CBS News' Kris Van Cleave reports.

Furthermore, 30 percent of drivers who admitted to checking Twitter behind the wheel said they were doing it all the time, despite the fact that 46 states prohibit texting and driving.

The National Highway Traffic Safety Administration says distracted driving caused over 3,100 deaths in 2013. Safety experts say drivers are about three times more likely to crash if they're dialing a number on the phone while driving and 23 times more likely texting and driving.

Despite the widespread understanding of the dangers of distracted driving, motorists are doing it anyway.

Twenty-two percent of the people surveyed who access a social network while driving gave "addiction" as the reason.

"In essence, it's a drug, or what I call a digital drug," Dr. David Greenfield said.

He founded the Center for Internet and Technology Addiction at the University of Connecticut.

Greenfield worked with AT&T on the survey and believes people get a high from using their cellphone behind the wheel similar to playing a slot machine.

"The reward comes in an unpredictable fashion, both in terms of what, when and where; and when the reward comes and it's positive and you actually like it, that's going to elevate the amount of dopamine in your brain, which is a pleasure chemical. It increases the likelihood of wanting to do it," Greenfield said.

There are apps available to prevent motorists from using their phones but have struggled to catch on.

One Australian company, Seeing Machines, has a different solution. It's developing a steering wheel-mounted device that tracks the driver's eye movements and triggers an alert when the person behind the wheel shows signs of distraction or being drowsy.

"We now have technologies in cars that will detect when you're doing the wrong thing and perhaps lock out behaviors that you shouldn't be doing," CNET editor at large Brian Cooley said. "This is talking about shaming people into a better behavior."