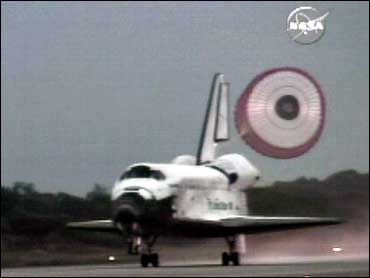 Space shuttle Discovery and its seven astronauts safely returned to Earth on Friday after some last-minute suspense over which landing site to use, closing out a year in which NASA finally got construction of the international space station back on track.

Its arrival announced by its signature twin sonic booms, the spaceship touched down on a floodlit runway in the early evening darkness after a smooth, 13-day flight during which the astronauts rewired the space station and delivered U.S. astronaut Sunita "Suni" Williams to the orbiting outpost for a six-month stay.

"We're just really proud of the NASA team that put it together," said Discovery commander Mark Polansky. "We think it's going to be a great holiday."

The shuttle brought home Williams' predecessor aboard the space station, German astronaut Thomas Reiter, who felt the pull of gravity Friday for the first time since July.

It was not until about an hour before the landing that NASA decided where to bring the shuttle home. There were showers over Florida, and crosswinds at the usual back-up landing site, Edwards Air Force Base in California's Mojave Desert.

NASA was not thrilled about the next-best landing site, White Sands Missile Range in New Mexico, because it lacks the cranes and other equipment needed to transport the shuttle back to its home at Cape Canaveral and service the ship on the ground. Only once has a shuttle landed there, in 1982.

Ultimately, NASA gave the go-ahead for a Florida landing when it appeared the rain would not reach Cape Canaveral. The shuttle came in through scattered clouds.

Several hours before the landing, space station commander Michael Lopez-Alegria played a recording of "I'll Be Home for Christmas."

"Thought this might be appropriate for Discovery," radioed Lopez-Alegria, a U.S. astronaut.

Discovery's return completed NASA's third shuttle flight of 2006, the most since 2002. After the Columbia disaster that killed seven astronauts in 2003, the space agency struggled to redesign the shuttle's fuel tank and resume regular construction of the half-built international space station.

Before this year, the only shuttle flight since the Columbia disaster was a single test mission in 2005.

Discovery's crew made four spacewalks, installing a two-ton addition to the space station and switching the orbiting outpost from a temporary power source to a permanent one. The fourth spacewalk was an impromptu affair, added when NASA was unable to get an accordion-like solar array on the space station to fold up.

Two spacewalkers tightened wires and nudged the panels, finally getting the 115-foot-long array to collapse into its compartment like a jack-in-the-box.

"In a tough situation like this, they figured out what the problem was ... and continued with the rest of the construction," said former shuttle commander Eileen Collins, who now serves on a NASA advisory panel. "I'm really proud of the guys."

Other than that, the mission was practically flawless.

U.S. astronaut Robert Curbeam took part in all four spacewalks, setting a record for the most in a single shuttle mission. His crewmate Christer Fuglesang, the first Swede in space, took three spacewalks.

The rewiring job set the stage for two new major additions to the space station from Europe and Japan that will be installed over the next two years. Five shuttle flights to continue space station construction are scheduled for next year.

"We've had a fantastic year," said Kirk Shireman, space station program deputy manager. "Next year is going to be bigger."