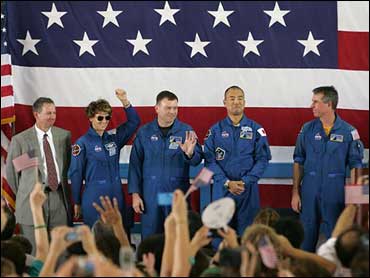 The seven-person crew returned to Earth on Tuesday after being the first to take a space shuttle into orbit since the Columbia disaster of 2003.

"In the last two and a half years, we have been through the very worst that manned space flight can bring us, and over the past two weeks we have seen the very best," NASA Administrator Michael Griffin told the astronauts and their families, colleagues and fans Wednesday.

The crowd waved American flags for the U.S. astronauts and Japanese flags for crew member Soichi Noguchi, one of the spacewalkers.

"As a rookie astronaut, I could not ask for more," Noguchi said. "We had three spacewalks, two bonus extension days in space and one great crew."

Senator Kay Bailey Hutchinson of Texas and House Majority Leader Tom DeLay were on hand to welcome Discovery's crew home to the city where Mission Control is located.

"Because of the courage of Discovery's crew, and the commitment of everyone at NASA and the entire space community, our generation has an opportunity to go farther into space and further into the void, to do the impossible and answer the unsolvable," DeLay said. "For that chance, we all owe the crew more than our thanks."

But while the homecoming has been filled with excitement for what mission controllers declared a "truly spectacular test flight," uncertainty remains for the future of the shuttle program.

Shortly after Discovery blasted off July 26, a nearly 1-pound chunk of foam insulation fell from the fuel tank — the very thing that was supposed to have been fixed after dooming Columbia. The foam missed Discovery, but NASA grounded all shuttle flights until engineers fix the problem.

The tense, two-week mission, which ended Tuesday morning when Discovery safely landed in California, exposed how vulnerable the shuttle fleet remains, despite a tremendous amount of money and effort invested in the first U.S. manned space mission in the 2½ years since the Columbia tragedy.

Shortly after Discovery lifted off July 26, a 1-pound chunk of foam insulation fell from the fuel tank — the very thing that doomed Columbia. The foam missed Discovery, but NASA grounded all shuttle flights until engineers fix the problem.

"We're going to try as hard as we can to get back in space this year," Griffin said at a post-landing news conference. "But we're not going to go until we're ready to go."

"We will not fly the next flight until we're ready and we feel the risk is low enough to fly another flight," agreed Discovery astronaut Steve Robinson.

NASA ground crews inspected Discovery after its return from orbit and found it in good condition, an official said Wednesday at NASA's Dryden Flight Research Center at Edwards Air Force Base in California.

Technicians counted 101 dings and divots, including 20 that were larger than one inch. Schaaf said the numbers were similar to the results of other shuttle post-landing inspections.

A preliminary inspection of the shuttle's thermal blanket under the commander's cockpit window showed that it remained intact during re-entry into the Earth's atmosphere. The protective blanket was a bit frayed and protruded outward but showed no scorch marks, Schaaf said.

NASA initially worried that the torn thermal blanket could come loose during re-entry and strike the shuttle. But the space agency decided against a fourth spacewalk to repair it after engineers concluded the chance of that happening was remote.

As the astronauts celebrated Wednesday, technicians at Edwards were busy preparing Discovery for its return to Florida. The cross-country trip atop a modified Boeing 747 takes a week of preparations and is expected to cost NASA about $1 million.

Another question facing NASA is whether the aging shuttle fleet is still able to do its job.

"The shuttle certainly is old. It is built on 1970s-era technology, but it is hand-maintained," said CBS News Space Consultant Bill Harwood. "It's like an old race car that's been lovingly maintained.

"It's still the only game in town that can carry heavy cargo and people into orbit."

"Eventually the shuttle will make its last flight, and I'll be sad, because I believe the space shuttle program has been very successful," said Discovery's Commander Eileen Collins.