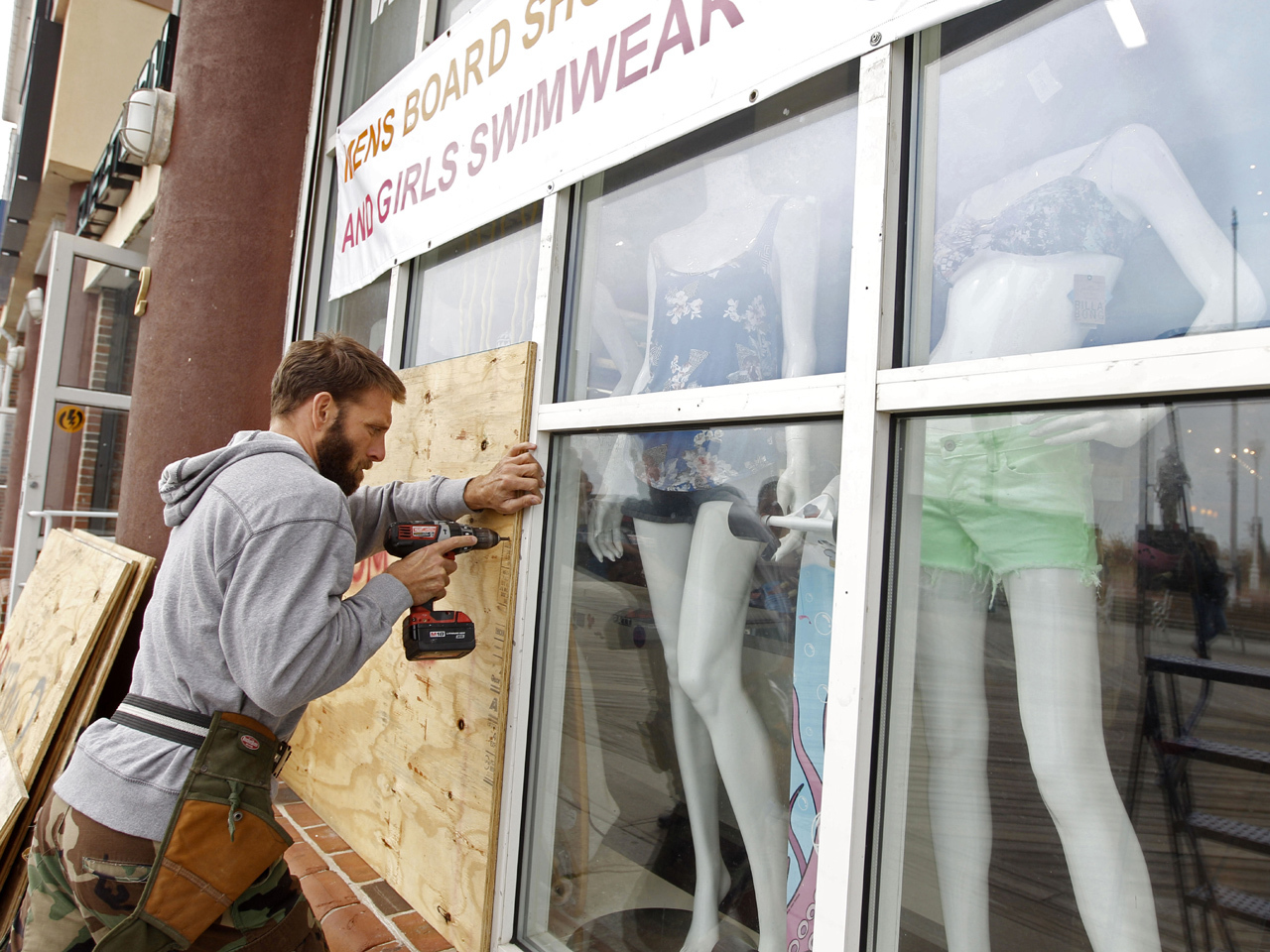 After causing heavy damage and at least 58 deaths in the Caribbean, Hurricane Sandy is expected to make landfall on the East Coast by Tuesday. No one can be certain how powerful it will become, but the signs are ominous.

Sandy is expected to strike the Eastern Seaboard near the Delaware coast, then hit two winter weather systems as it moves inland, creating a hybrid monster storm.

Even if Sandy loses strength and makes landfall as something less than a hurricane, the combined storm was expected to bring misery to a huge section of the East. An 800-mile wide swath of the country could see 50 mph winds regardless of Sandy's strength.

Experts said the storm could be wider and stronger than Irene, which caused more than $15 billion in damage, and could rival the worst East Coast storm on record.

"We're looking at impact of greater than 50 to 60 million people," said Louis Uccellini, head of environmental prediction for the National Oceanic and Atmospheric Administration.

"This is not a coastal threat alone," said Craig Fugate, director of the Federal Emergency Management Agency. "This is a very large area."

Sandy weakened briefly to a tropical storm early Saturday but was soon back up to Category 1 strength, packing 75 mph winds about 335 miles southeast of Charleston, S.C., as of 5 p.m. Experts said the storm was most likely to hit the southern New Jersey coastline by late Monday or early Tuesday.

Meteorologist and CBS News hurricane analyst David Bernard of CBS Station WFOR says the storm weakened slightly overnight to a tropical storm, but was upgraded this morning to a hurricane packing 75 mph winds.

As of Saturday afternoon tropical storm-force winds are already near the coast of North Carolina.

Up and down the coast, people were cautioned to be prepared for days without electricity. Jersey Shore beach towns began issuing voluntary evacuations and protecting boardwalks. Atlantic City casinos made contingency plans to close, and officials advised residents of flood-prone areas to stay with family or be ready to leave. Several governors declared states of emergency. Airlines said to expect cancellations and waived change fees for passengers who want to reschedule.

The White House said President Barack Obama had a conference call Saturday to discuss Hurricane Sandy with the Homeland Security secretary, the head of the Federal Emergency Management Agency, the director of the National Hurricane Center and his homeland security adviser.

The White House says President Obama made clear to emergency management officials that the federal government should do all it can to provide resources to state and local officials along the East Coast as they brace for the approaching storm.

New Jersey's Chris Christie, who was widely criticized for not interrupting a family vacation in Florida while a snowstorm pummeled the state in 2010, broke off campaigning for Republican presidential nominee Mitt Romney in North Carolina Friday to return home.

"I can be as cynical as anyone," the pugnacious chief executive said in a bit of understatement Saturday. "But when the storm comes, if it's as bad as they're predicting, you're going to wish you weren't as cynical as you otherwise might have been."

The storm forced the presidential campaign to juggle schedules. Romney scrapped plans to campaign Sunday in the swing state of Virginia and switched his schedule for the day to Ohio. First lady Michelle Obama canceled an appearance in New Hampshire for Tuesday, and President Obama moved a planned Monday departure for Florida to Sunday night to beat the storm.

In Ship Bottom, just north of Atlantic City, Alice and Giovanni Stockton-Rossini spent Saturday packing clothing in the back yard of their home, a few hundred yards from the ocean on Long Beach Island. Their neighborhood was under a voluntary evacuation order, but they didn't need to be forced.

"It's really frightening," Alice Stockton-Rossi said. "But you know how many times they tell you, `This is it, it's really coming and it's really the big one' and then it turns out not to be? I'm afraid people will tune it out because of all the false alarms before, and the one time you need to take it seriously, you won't. This one might be the one."

A few blocks away, Russ Linke was taking no chances. He and his wife secured the patio furniture, packed the bicycles into the pickup truck, and headed off the island.

"I've been here since 1997, and I never even put my barbecue grill away during a storm. But I am taking this one seriously," he said.

What makes the storm so dangerous and unusual is that it is coming at the tail end of hurricane season and the beginning of winter storm season, "so it's kind of taking something from both," said Jeff Masters, director of the private service Weather Underground.

Masters said the storm could be bigger than the worst East Coast storm on record -- the 1938 New England hurricane known as the Long Island Express, which killed nearly 800 people. "Part hurricane, part nor'easter -- all trouble," he said. Experts said to expect high winds over 800 miles and up to 2 feet of snow as well inland as West Virginia.

And the storm was so big, and the convergence of the three storms so rare, that "we just can't pinpoint who is going to get the worst of it," said Rick Knabb, director of the National Hurricane Center in Miami.

Officials are particularly worried about the possibility of subway flooding in New York City, said Uccellini.

New York Gov. Andrew Cuomo told the Metropolitan Transportation Authority to prepare to shut the city's subways, buses and suburban trains by Sunday, but delayed making a final decision. The city shut the subways down before last year's Hurricane Irene, and a Columbia University study predicted that an Irene surge just 1 foot higher would have paralyzed lower Manhattan.

Up and down the Eastern Seaboard and far inland, officials urged residents and businesses to prepare in big ways and little.

The Virginia National Guard was authorized to call up to 500 troops to active duty for debris removal and road-clearing, while homeowners stacked sandbags at their front doors in coastal towns.

Warren Ellis, who was on an annual fishing pilgrimage on North Carolina's Outer Banks, didn't act fast enough to get home.

Ellis' 73-year-old father, Steven, managed to get off uninhabited Portsmouth Island near Cape Hatteras by ferry Friday. But the son and his 10-foot camper got stranded when high winds and surf forced state officials to suspend service Saturday.

"We might not get off here until Tuesday or Wednesday, which doesn't hurt my feelings that much," said Ellis, 44, of Amissville, Va. "Because the fishing's going to be really good after this storm."

Last year, Hurricane Irene poked a new inlet through the island, cutting the only road off Hatteras Island for about 4,000.

In Maine, lobsterman Greg Griffen wasn't taking any chances; he moved 100 of his traps to deep water, where they are more vulnerable to shifting and damage in a storm.

"Some of my competitors have been pulling their traps and taking them right home," said Griffen. The dire forecast "sort of encouraged them to pull the plug on the season."

In between helping customers picking up necessities Saturday, Fry was moving materials above the flood line. Fry said he was still trying to recover from the losses of last year's storm, which he and his wife, Deb, estimated at the time at $35,000 in merchandise.

"It will take a lot of years to cover that," he said.

Christie's emergency declaration will force the shutdown of Atlantic City's 12 casinos for only the fourth time in the 34-year history of legalized gambling here. The approach of Hurricane Irene shut down the casinos for three days last August.

Atlantic City officials said they would begin evacuating the gambling hub's 30,000 residents at noon Sunday, busing them to mainland shelters and schools.

Tom Foley, Atlantic City's emergency management director, recalled the March 1962 storm when the ocean and the bay met in the center of the city.

"This is predicted to get that bad," he said.

Mike Labarbera, who came from Brooklyn to gamble at the Trump Taj Mahal Casino Resort, thought the caution was overblown.

"I think it's stupid," he said. "I don't think it's going to be a hurricane. I think they're overreacting."

Ray Leonard disagreed, and has a famous storm survival story to back him up.

Leonard rode out 1991's infamous "perfect storm", made famous by the Sebastian Junger bestseller of the same name, with two cremates in his 32-foot sailboat, Satori, before being plucked from the Atlantic off Martha's Vineyard, Mass., by a Coast Guard helicopter.

The 85-year-old former sailor said Saturday that if he had loved ones living in the projected landfall area, he would tell them to leave.

"Don't be rash," Leonard said in a telephone interview Saturday from his home in Fort Myers, Fla. "Because if this does hit, you're going to lose all those little things you've spent the last 20 years feeling good about."