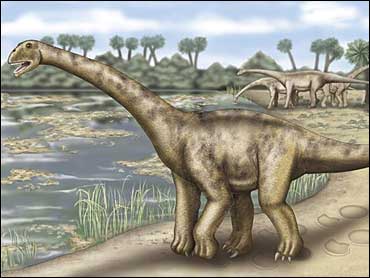 (Livescience.com) We might want to rename the Brachiosaurus with the moniker Gassiosaurus, new research indicates. The gassy emissions from these giant dinosaurs may have been enough to warm the Earth, the researchers say.

Sauropods are large plant-eating dinosaurs typified by such titans as Apatosaurus (once known as Brontosaurus) and Brachiosaurus. When they lived, during the Mesozoic era - from about 250 million years ago until the dinosaurs died out 65 million years ago - the climate was warm and wet. Nothing on Earth today compares with these giants.

The researchers found that the greenhouse gas methane produced by all sauropods across the globe would have been about 520 million tons per year, a number on par with the total amount of methane currently produced by both natural and man-made sources. [Album: World's Biggest Beasts]

The researchers, led by David Wilkinson of Liverpool John Moores University in the United Kingdom, did their best to get an accurate estimate of how much gas these big dinosaurs would have created, but their answers are still just estimates based on multiple assumptions, they warn.

The greenhouse gas methane is a natural byproduct of the digestive process of plant eaters, especially in herbivores called ruminants (like cows and camels). The researchers suspect that like ruminants, sauropods would have harbored methane-producing bacteria in their intestines to help digest these fibrous foods.

"To process that amount of vegetation they have to be relying on microbes in their digestive system," Wilkinson told LiveScience. "But without a time machine you can't be sure."

They used a mathematical model to determine how much gas these plant-eating giants would have eaten. They extended data on methane production by modern mammals, based on size, up into the reaches of the sauropods.

In their calculations the researchers used middle-of-the-road numbers: 10 sauropods, each weighing 20,000 pounds (9,071 kilograms), could have roamed 1 square kilometer of lush Mesozoic habitats. "We've taken a middle-ground value," Wilkinson said. "We tried to be reasonably conservative."

"I was expecting a number like that produced by cows, so the size of the number really surprised me," Wilkinson said. "It's way, way, way ahead of the estimated methane production by modern livestock." (Cows produce 55 to 110 million tons (50 to 100 million tonnes) of methane each year, he estimated.)

It makes sense, based on the animal's huge size, that they would make much more methane per individual than a cow. But, there are several other reasons why these large dinosaurs could have produced so much more gas than modern herbivores.

The animals would have had plenty of plants to eat, because they could reach high and low, and because of the warm climate, there was plenty of vegetation; in addition, these animals had much vaster areas in which to graze.

The real question is, did these dinosaurs' gassy emissions warm the planet?

"The thing about methane is it is an extremely potent greenhouse gas," Wilkinson said. If the levels were anywhere near where their calculations indicate, he said, it very well could have been one of many factors that made that era warmer and wetter than modern times.

The study is detailed in today's (May 7) issue of the journal Current Biology.

Forrest Hayes case: Kiss of Death and the Google Exec
Thanks for reading CBS NEWS.
Create your free account or log in
for more features.
View CBS News In
CBS News App Open
Chrome Safari Continue
Be the first to know
Get browser notifications for breaking news, live events, and exclusive reporting.