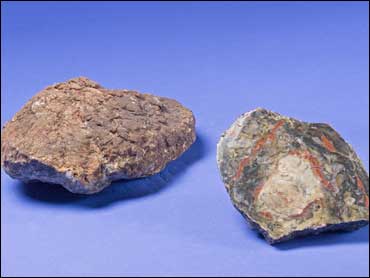 A pile of dinosaur dung 130 million years old sold at a New York auction for nearly $1,000.

The prehistoric deposit fetched $960 at Wednesday's auction, said a spokeswoman for Bonhams New York. Its pre-auction estimate was $450.

The fossilized dung is from the Jurassic era, the auction house said. It looks like a rock on the outside and a colorful mineral inside.

The buyer was Steve Tsengas of Fairport Harbor, Ohio. The 71-year-old owns OurPets, a company that sells products to treat dog and cat waste.

Tsengas bought the dung in hopes of motivating his employees and using it as a marketing tool by displaying it at the company's booth at trade shows, he said.

"Poop," he said, "is a big business in the pet industry."

The natural history auction also included an 18-carat gold box shaped like a crab by lapidary artist Manfred Wild. It sold for $168,000.

Meteorites from the collection of Ron Oriti sold for $95,313.