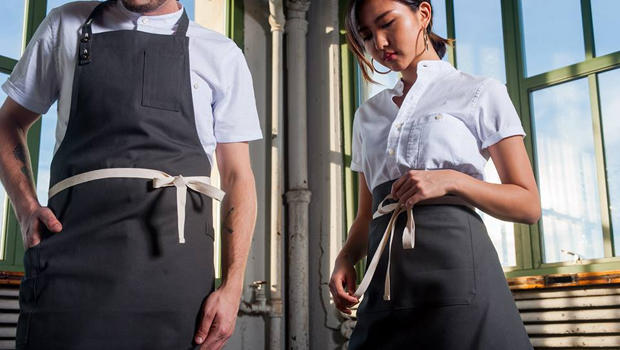 Fashion has given a hip edge to what food servers are wearing. Rita Braver checked the latest in food couture:

All dressed up for the holidays -- that's the look for some food servers. But these days, year-round there's more than food on the menu.  In restaurants everywhere it's service with a STYLE.

Remember the days of diner counters and car hops?

Well, guess what: microskirts and skates are still on a roll.

But for a growing number of restaurants, the look is understated, sleek and chic.

Deirdra Jones said, "I saw nobody in fashion's paying attention to this, and it's important, and it's such a cool niche."

So, almost five years ago fashion designer and her Welsh-born husband, Isetyn, founded Jones of Boerum Hill, in -- where else? -- Brooklyn.

They started with custom-made aprons, with special pockets for waiters and chefs.

There are also detachable leather straps, "so you can actually change color on the leather," Isetyn said.

But then it was on to tailored shirts, jumpsuits and jackets based on vintage designs -- impressive to this former waitress. "I think I would've gotten bigger tips" laughed Braver, trying on one outfit.

The Joneses have done uniforms for celebrity chefs like Marcus Samuelsson, and for 28-year old Allen Dabagh, the man behind the Brooklyn restaurant Boutros.

But if your taste runs to something more colorful, come to the Elizabeth Street Café in Austin, a Vietnamese and French joint, where waitresses like Brittany Kobayashi and Jen Jones wear one-of-a kind wrap dresses, designed by creative director Ryan Smith.

The mood he was looking for, Smith said, was "playful, light, easy."

"I think it's just really fun, and it matches with the whole restaurant vibe," said Kobayashi. "And everyone just loves them so much."

Jones love them so much she's made the look permanent.

So, which came first -- the dress or the tattoo? "The dress came first," Jones laughed.

And yes, some folks, do notice: "It just kind of flows, it works well," said one customer. "Adds to the experience."

But if you like your food served with formal flair, there are still places like New York's famed 21 Club, which has barely changed since it began in 1929: captains in black, waiters in white.

And general manager Teddy Suric has no desire to update: "If I put our employees in a Tom Ford suit or Joseph Abboud suit, it doesn't kind of tie in with the whole atmosphere and the ambience that we like to give."

"Why fool with perfection?" asked Braver.

"Exactly. If it's not broken, you know, don't meddle with it!"

Still, 21 is all decked out for the holidays … ready for that New Year's reservation!