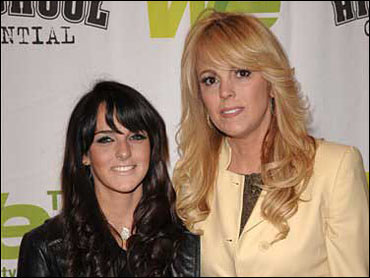 Lindsay Lohan long ago made a name for herself. The 22-year-old actress also has a younger sister, Ali, who hopes to follow in her footsteps.

Ali's journey to become a recording artist, with mother Dina managing her career, is the subject of the E! reality show, "Living Lohan."

The 14-year-old said it isn't always easy having a famous older sibling.

"My sister is so hugely successful," Ali told Early Show co-anchor Julie Chen. "I feel like I have to be as good as she is, follow in her footsteps and feel I have to do as good as her. I feel a little nervous and like I have to impress everyone."

Dina said that Ali is highly competitive, but that there is too much of an age difference for sibling rivalry between the two sisters.

"Lindsay has taught her so much," Dina said. "Ali has seen so much that's happened. I think for Ali she has really had a head start."

After numerous stories which portray Dina as a stage mother with her own aspirations of stardom, the coverage of her high profile custody battle with her recovering addict ex-husband Michael, and reports about Lindsay's trips to rehab and brushes with the law, Dina thought that a reality show would help change the public's perception of her family.

"The only reason why I did the show originally was to diffuse the rumors," Dina said. "The press for two years was really horrific on us. Ali is a talented artist. I have two sons as well who have nothing to do with the business. I think at that point, you know, there's such a weird perception of Hollywood families and we're so not like that. We're just normal people."

But, allowing the cameras into her home hasn't stopped the tabloids from printing stories about all things Lohan.

"I think the tabloids will never stop," she said. "But it was our voice. We had a voice in what they're saying. We can always close our door and walk away. I thought there was no other way to do this."

Ali pointed out that the show gave her an opportunity to shoot down rumors that she had gotten a nose job.

"I'm 14 years old and that would never happen," she said.

"She just went on the show and said 'I didn't,'" Dina added. "People are going to believe you seeing you, as opposed to a publicist or someone writing something that's completely fabricated," she said.

Ali Lohan's first single, "All The Way Around" was released on iTunes Monday.