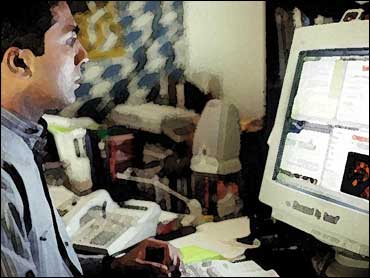 Internet use is growing at a faster rate among the poor and minorities and in rural areas, the Bush administration says, claiming some success in shrinking the "digital divide."

But critics said the administration's report, released Tuesday, plays with the numbers, while the government's statistics show that the gap between technology haves and have-nots is actually widening.

"They're telling Americans the problem has been solved, and even by the plain statistics it shows the problem isn't solved," said Larry Irving, who wrote previous editions of the report for the Clinton administration. "It's like putting lipstick on a pig, and saying it's no longer a pig."

In 2001, while both groups made progress, that difference had jumped to over 50 percentage points. Just over a quarter of the poorer group uses the Internet.

Nancy Victory, head of the National Telecommunications and Information Agency, which released the report, said, "I prefer to look at the glass as half-full." She pointed to the growth rates as more telling. From 1998 to 2001, Internet use among blacks grew at an annual rate of 31 percent, while use among whites grew by 19 percent.

Critics say those numbers are deceptive.

"That just means they're starting from a position that's so far back that any percentage looks impressive," said Tony Wilhelm of the Benton Foundation, which runs the educational Digital Divide Network.

There is also an increasing gap along racial lines, particularly between Hispanics and whites. Southern states show very little progress.

"The Net revolution has been going on for six or seven years," Irving said. "These people are still on the outside looking in."

President Bush's 2003 budget wipes out the Technology Opportunities Program, a Commerce department initiative responsible for creating self-sustaining technology projects, such as placing computers and Internet access in inner cities. Its supporters argue that killing the program would be a mistake.

"Killing the TOP program is akin to punishing success," said Greg Rohde, a former Commerce official under President Clinton. "One of the reasons we're seeing growth and opportunity among minorities ... is because of programs like TOP that have gotten us to that point."

"The TOP program was great, but it was $15 million," Victory said.

Bush last year cut funds for the program by 65 percent, from $42.8 million.

Bush's 2003 education budget terminates several technology projects including community technology centers and programs to help teachers learn how to use computers in the classroom.

"The president proposed consolidating the variety of technology programs into a single, flexible state block grant program," Kozberg said. The budget provides about $700 million for those technology grants, Kozberg said, which are targeted to low-income school districts.

By Ian D. Hopper © MMII The Associated Press. All Rights Reserved. This material may not be published, broadcast, rewritten, or redistributed