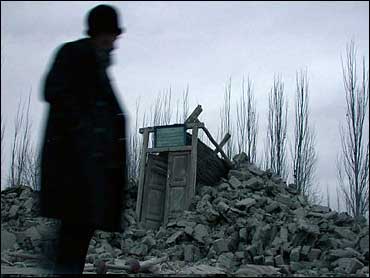 Worried that heavy equipment would crush buried survivors, rescuers dug with their bare hands Tuesday through the rubble of buildings destroyed in an earthquake that killed at least 265 people in China's far west.

No one was found alive Tuesday and it wasn't clear how many were still missing from Monday's quake, said an official of the rescue center in Bachu County, where the most deaths were reported. He would give only his surname, An.

At least 2,050 people were injured in the quake, which devastated an isolated area of the Xinjiang region near the mountainous border with Kyrgyzstan, the official Chinese news agency Xinhua said. It said 8,861 houses and hundreds of other buildings were destroyed.

Rescuers used their hands to dig through rubble, afraid that heavy equipment might injure buried survivors, said a volunteer in the hardest-hit village, Chongku Qiake. Officials said 90 percent of that town's 30,000 people were forced from damaged homes.

"Dead bodies or dying people were pulled out from time to time," said the volunteer, who said he was a factory worker and identified himself as Armutikari, a Muslim name.

Many people in the town, including some of the injured, spent the night outdoors in subfreezing temperatures, he said. The official, An, said at least 265 people died in the quake.

Chinese officials put the magnitude of the Monday quake at 6.8, while the U.S. Geological Survey in Golden, Colo., said it was 6.3.

More than 500 aftershocks jolted the area overnight Monday, Xinhua said. A quake of magnitude 5 was reported before dawn Tuesday, but no injuries or damage were reported.

Earthquakes are common in Xinjiang, especially its far west, which includes the foothills of the Pamir and Tianshan mountains.

Many victims of the quake Monday were at home eating breakfast when it hit, according to officials. No foreigners or people from Hong Kong or Taiwan were among the dead, Xinhua said.

The government is rushing more than 6,000 tents, food and medical supplies to the area, about 1,750 miles west of Beijing, the official Xinhua News Agency reported.

Some of those killed were children whose schools were toppled by the tremors. Xinhua said 900 classrooms were wrecked. Officials said at least 12 students died.

Photos in state newspapers Tuesday showed residents bundled up against the winter cold standing in the street alongside heaps of their salvaged belongings. A wrecked schoolhouse was shown with one cracked brick wall left standing, tattered posters of Karl Marx and Chinese communist founder Mao Zedong hanging from it.

People in Urumqi, the Xinjiang capital some 550 miles northeast of Bachu, were donating clothes, quilts and money.

"It's something we should do to help people," said Li Jinhua, a taxi driver there who said she had given a bag of clothes.

The Communist Party leader for Xinjiang, the deputy secretary of China's Cabinet and the deputy minister of civil affairs are at the scene of the earthquake supervising rescue work, state television said.

A 42-member earthquake rescue team was dispatched from Beijing on Monday with dogs trained to sniff out buried survivors and state-of-the-art detection equipment.

The Greek government announced that it was sending $215,000 for earthquake aid. The China Daily newspaper said the Chinese and Xinjiang Red Cross societies sent winter clothes, quilts and other aid worth $55,000.

China's deadliest earthquake in modern history struck the northeastern city of Tangshan on July 28, 1976, killing some 240,000 people. Its magnitude was measured at 7.8 to 8.2.