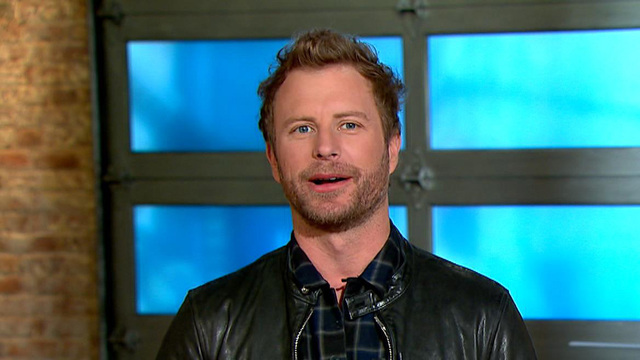 Award-winning country artist Dierks Bentley has sold over five million albums worldwide and has a career tally of 13 number-one songs. Only on "CBS This Morning," the 13-time Grammy nominated singer, songwriter and co-host of this year's Academy of Country Music Award revealed the nominees for the biggest categories.

This year's nominees featured country's biggest stars such as Miranda Lambert -- the current record holder for most consecutive wins in the Female Vocalist of the Year category -- and Garth Brooks, who holds the most number of wins for Entertainer of the Year with six trophies. Both artists received nods in the respective categories again this year.

Bentley said the ACM Awards are "spicing it up" this year by bringing in both old and new folks.

"Old Dominion, that's pretty cool. They're bringing in some new blood," Bentley said about the nominee for Vocal Group of the Year.

Once the singer was done revealing the list of nominees, the "CBS This Morning" co-hosts also surprised the singer with another grand reveal -- Bentley's nomination for Male Vocalist of the Year.

When asked what the award nomination meant to him, Bentley said it represented his connection with fans and recognition by his peers.

"It just means it's going to be a big party that night," the singer said.

Bentley also discussed his upcoming eighth studio album, "Black," named after his wife's maiden name and inspired by the ups and downs of relationships.

"As a country singer, songwriter... you have the license to delve into some of the lonesome side of life, the hard stuff, the rough patches, and I think that's kind of a responsibility as a songwriter so (the album) kind of explores those ways as well too but mostly a positive relationship album," Bentley said.

He also described a memorable encounter with a fan at a concert when he sang one of his songs, "I Hold On."

"This guy about 50 years old looks over and goes, 'This song means more to me than you possibly know.' He broke down, started crying," Bentley recalled. "The songs get woven into the fabric of people's lives. They mean a lot. Country lyrics -- the storytelling is so powerful."

Bentley will be hosting the 51st ACM Awards with his long-time friend and country star Luke Bryan. It will be broadcast on CBS Sunday, April 3, 2016. Here are the list of nominees for some of the Country Music Awards' biggest categories.

Entertainer of the Year:

Vocal Duo of the Year:

Vocal Group of the Year:

Album of the Year:

Female Vocalist of the Year:

Male Vocalist of the Year:

Boy on struggle of mining cobalt in Congo