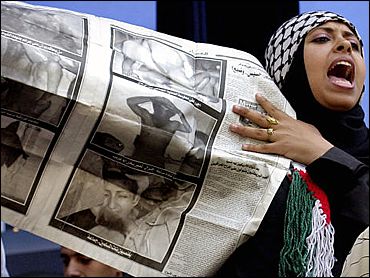 The Iraq prisoner abuse scandal shifted Sunday to the question of whether the Bush administration set up a legal foundation that opened the door for the mistreatment.

Within months of the Sept. 11 attacks, White House counsel Alberto Gonzales reportedly wrote President Bush a memo about the terrorism fight and prisoners' rights under the Geneva Conventions.

"In my judgment, this new paradigm renders obsolete Geneva's strict limitations on questioning of enemy prisoners and renders quaint some of its provisions," Gonzales wrote, according to the report in Newsweek magazine. Secretary of State Colin Powell "hit the roof" when he read the memo, according to the account.

The roots of the scandal lay in a decision, approved last year by Defense Secretary Donald Rumsfeld, to expand a classified operation for aggressive interrogations to Iraqi prisoners, a program that had been focused on the hunt for al Qaeda, The New Yorker magazine reported.

"And the goal was to use a couple of very harsh means, one, sexual humiliation, another, a more physical force," The New Yorker story's author, Seymour Hersh told CBS News Face The Nation host Bob Schieffer. "That -- and I'm not saying Rumsfeld authorized what we saw in the last few weeks, but he did authorize these guys to come into the prison system and jack it up, get better stuff."

The Pentagon said that story was "filled with error and anonymous conjecture" and called it "outlandish, conspiratorial." National security adviser Condoleezza Rice, in a German television interview, said of The New Yorker report, "As far as we can tell, there's really nothing to the story."

Also speaking on Face The Nation, top Democrat on the Senate Armed Services Committee, Sen. Carl Levin of Michigan said the Armed Services panel will do everything it can to find out what happened -- and whether there's any validity to the report.

"A full-blown investigation was required before this most recent article by Seymour Hersh, and I have assurance from Senator (John) Warner that there is going to be -- there are going to be extensive hearings with extensive numbers of witnesses called. He's already given that indication," Levin said.

Warner is the chairman of the Senate Armed Services Committee.

Levin also said that there's clear evidence that the abuse wasn't just the work of a few soldiers -- and that the policy went up the chain of command.

Powell said Sunday that there were discussions at high levels inside the Bush administration last fall about information from the International Committee of the Red Cross alleging prisoner abuse at Abu Ghraib prison, the focal point of the scandal.

"We knew that the ICRC had concerns, and in accordance with the matter in which the ICRC does its work, it presented those concerns directly to the command in Baghdad," Powell said on "Fox News Sunday." "And I know that some corrective action was taken with respect to those concerns."

Powell added, "All of the reports we received from ICRC having to do with the situation in Guantanamo, the situation in Afghanistan or the situation in Iraq was the subject of discussion within the administration, at our principals' committee meetings" and at National Security Council meetings.

Congressional critics suggested the administration may have unwisely imported to Iraq techniques from the war on al Qaeda.

"There is a sort of morphing of the rules of treatment," said Sen. Joe Biden, D-Del. "We can treat al Qaeda this way, and we can't treat prisoners captured this way, but where do insurgents fit? This is a dangerous slope."

The abuse scandal goes "much higher" than the young American guards watching over Iraqi detainees at Abu Ghraib prison in Baghdad, Biden said on NBC's "Meet the Press."

In early 2002, the White House announced that Taliban and al Qaeda detainees would not be afforded prisoner-of-war status, but that the United States would apply the Geneva Conventions to the war in Afghanistan.

Michigan Sen. Carl Levin, the top Democrat on the Senate Armed Services Committee, said the reports that Rumsfeld approved a secret program on interrogation for use in Iraq raise "this issue to a whole new level."

Asked about the Gonzales memo, Powell said: "I wouldn't comment on the specific memo without rereading it again. But ... the Geneva Accord is an important standard in international law and we have to comply with it."

Powell, interviewed from Jordan by NBC, left open the possibility of problems up the line from the prison guards who engaged in abuse. "I don't see yet any indication that there was a command-climate problem higher up," the secretary said.

Sen. John McCain, R-Ariz., expressed concern over the shift in responsibility for the scandal at the prison, where military intelligence personnel were given authority over the military police.

"We need to take this as far up as it goes," said McCain.

Former CIA counterterrorism official Vincent Cannistraro said it was a major miscalculation to apply interrogation methods that were specifically designed to extract information from al Qaeda prisoners to Abu Ghraib and other holding centers inside Iraq.

"It was probably the most counterproductive move that the policy-makers could have made and it showed the complete misunderstanding of the Iraq culture," said Cannistraro.

The reasons for importing the techniques, Cannistraro said, were the frustrations at the policy level in Washington that not enough information was being obtained about weapons of mass destruction and the frustration over the lack of information about the resistance in Iraq.