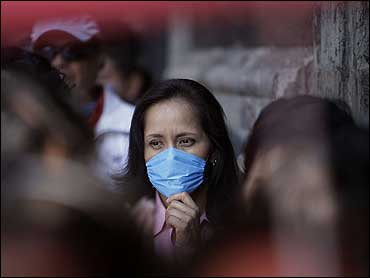 In light of the media coverage of the H1N1 flu outbreak over the past week and a half, you could be forgiven for being slightly surprised you aren't dead yet.

Consider this series of questions asked by CNN's John Roberts last Monday, which were flagged by NPR: "Is this the killer virus that we've all been fearing for decades? Is it just a threat? Is this 1976, where we had a small, contained outbreak, or is this 1918, where 20 million people died worldwide?"

Scary stuff. In fairness to Roberts, he was just asking questions about how bad things could get - not asserting that they were definitely going to get there. But when the specter of a "killer virus" is raised - and when media outlets (including CBS News) pepper their aggressive coverage with words like "pandemic" and breathlessly report each new diagnosed case - it's reasonable to expect that many will fear the worst.

There was certainly ample opportunity to fret: On the network news last week, swine flu stories took up a whopping 43 percent of airtime, according to the Project For Excellence In Journalism.

It came as no surprise, then, when facemasks began appearing on the streets of New York and other cities last week - despite their questionable value. Around the world, meanwhile, some governments have not exactly been models of rational and reasoned reaction. In China, more than 70 Mexicans were quarantined despite showing no signs of the flu, prompting charges of discrimination. In Egypt, more than 300,000 pigs were slaughtered despite the fact that no cases of the flu have been reported in the country - and that you can't get it from eating pork. ("Swine flu" isn't even really swine flu, exactly - it's two parts swine, one part avian, and a touch of human, though it did originate in pigs.)

And yet, as skeptics are all too happy to point out, most cases of the flu, outside an initial spate of fatalities in Mexico, have not been life threatening. Just one American citizen has died from the disease. Your standard everyday flu, by contrast, kills more than 100 people a day, and yet it is largely treated as a fact of life, not a grave threat.

So does all this add up to an overreaction? Well, maybe. But that's not the whole story.

It's certainly safe to say that the media have not shown much restraint in covering a flu that reporters have been all-too-happy to characterize as "deadly." Yet the press did not create the story out of thin air: The World Health Organization and Centers For Disease Control have been offering stark warnings about the disease from the outset. When the WHO suggests that a "pandemic is imminent," as it did last week, headlines are going to follow.

And despite the fact that the story has gotten less play this week, the world is not exactly in the clear. The biggest problem with media coverage of the flu, in fact, may be that reporters haven't always informed news consumers that the danger isn't necessarily only in the short term. The 1918 Spanish flu outbreak killed millions around the globe, but it didn't look so bad when it first emerged in the spring. By August, however, it had mutated to a far deadlier form.

"That's what has a lot of the experts frightened," infectious-disease specialist Dr. Neil O. Fishman told the New York Times. "When it recurs, there's the possibility it could be more virulent."

No one knows if that will happen. H1N1 could more-or-less disappear, leaving many of us scratching our heads over what the big deal was, or it could mutate into something significantly worse than what we've seen so far. The news has been relatively good in the short term -- tests have suggested both that many of us may have at least some immunity and that key components seem to be missing for the disease to fulfill our worst fears.

In the end, oddly enough, the sensationalistic media coverage may have been a positive: It has meant greater pressure on countries around the world to prepare for a potentially deadly mutation as well as the deployment of resources that might not have been available absent public outcry.

Does that mean the media should be commended for scaring Americans into stocking up on facemasks and dosing themselves unnecessarily with Tamiflu? Perhaps not. But the H1N1 outbreak may be one of those rare cases where a little sensationalism wasn't such a bad thing.