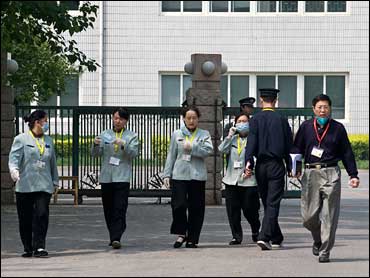 Beijing on Monday denied discriminating against Mexicans by quarantining them as a safeguard against the H1N1 flu outbreak, while the Latin American country said it was sending a plane to China to bring back its citizens.

Mexico is upset because Chinese health officials have quarantined more than 70 Mexican travelers even though some are apparently not at risk for the virus.

In one case, a Mexican couple and their three small children were rousted from their hotel room at 4 a.m. and transported to a hospital, said Jorge Guajardo, the Mexican ambassador to Beijing.

None of those in isolation has presented symptoms and most had no contact with infected persons or places, he said.

Mexican President Felipe Calderon expressed dismay that "some countries or places are taking discriminatory measures because of ignorance and misinformation." Officials said the government will charter an Aeromexico airliner in the coming hours to take home any Mexicans who want to leave China.

Meanwhile, the H1N1 epidemic spread deeper into the United States, Europe and Latin America - and in Canada, back to pigs - as Mexico's health chief hinted Sunday it may soon be time to reopen businesses and schools in the nation where the outbreak likely began. (Read more.)

China's Foreign Ministry said Mexicans were not being singled out and added it hoped Mexico would "address the issue in an objective and calm manner."

"The relevant measures are not targeted at Mexican citizens, and are not discriminatory. This is purely a question of health inspection and quarantine," ministry spokesman Ma Zhaoxu said in a statement, adding China was willing to help Mexico fight the epidemic.

China's authoritarian government doesn't stand on niceties when shifting into crisis mode, locking down much of the country during last summer's Beijing Olympics and sealing off Tibetan areas following anti-government protests last year.

Its responses can often be extreme, shifting from neglectful to over-the-top. During the 2003 outbreak of SARS, or severe acute respiratory syndrome, officials went from denying they had a problem to shutting down much of the country and quarantining scores of people virtually overnight.

The World Health Organization said that while it advises countries to be focussed on trying to control any outbreak or spread of the virus, member states drew up their own policies for specific measures such as quarantines.

"It's really up to each country and should be in accordance with their own regulations and legislation on public health and protection of the population," Hans Troeddson, the WHO's representative in China, said in an interview.

Chinese authorities also tracked down and quarantined other passengers who had been on the same flight as a Mexican traveler later diagnosed in Hong Kong with swine flu, and none showed symptoms of the virus, the Health Ministry said.

As part of its swine-flu prevention, Beijing had already banned imports of pork from Mexico, some U.S. states and Alberta in Canada. It has also canceled the only direct flights between China and Mexico, a twice weekly service by Aeromexico.

Also mindful of the SARS crisis, health workers and police in Hong Kong sealed a downtown hotel with 350 tourists and employees inside to prevent the possible spread of swine flu after a Mexican who stayed there developed a fever. The 25-year-old man, who was not identified, was in stable condition Sunday. The hotel was under a seven-day quarantine that began Friday.

Guajardo said Chinese officials have not furnished the consular notification for Mexicans in quarantine and access he said they were required to provide under an international treaty. On Monday, a tight security cordon was visible around the hotel where some of the Mexicans are being held on the edge of Beijing.