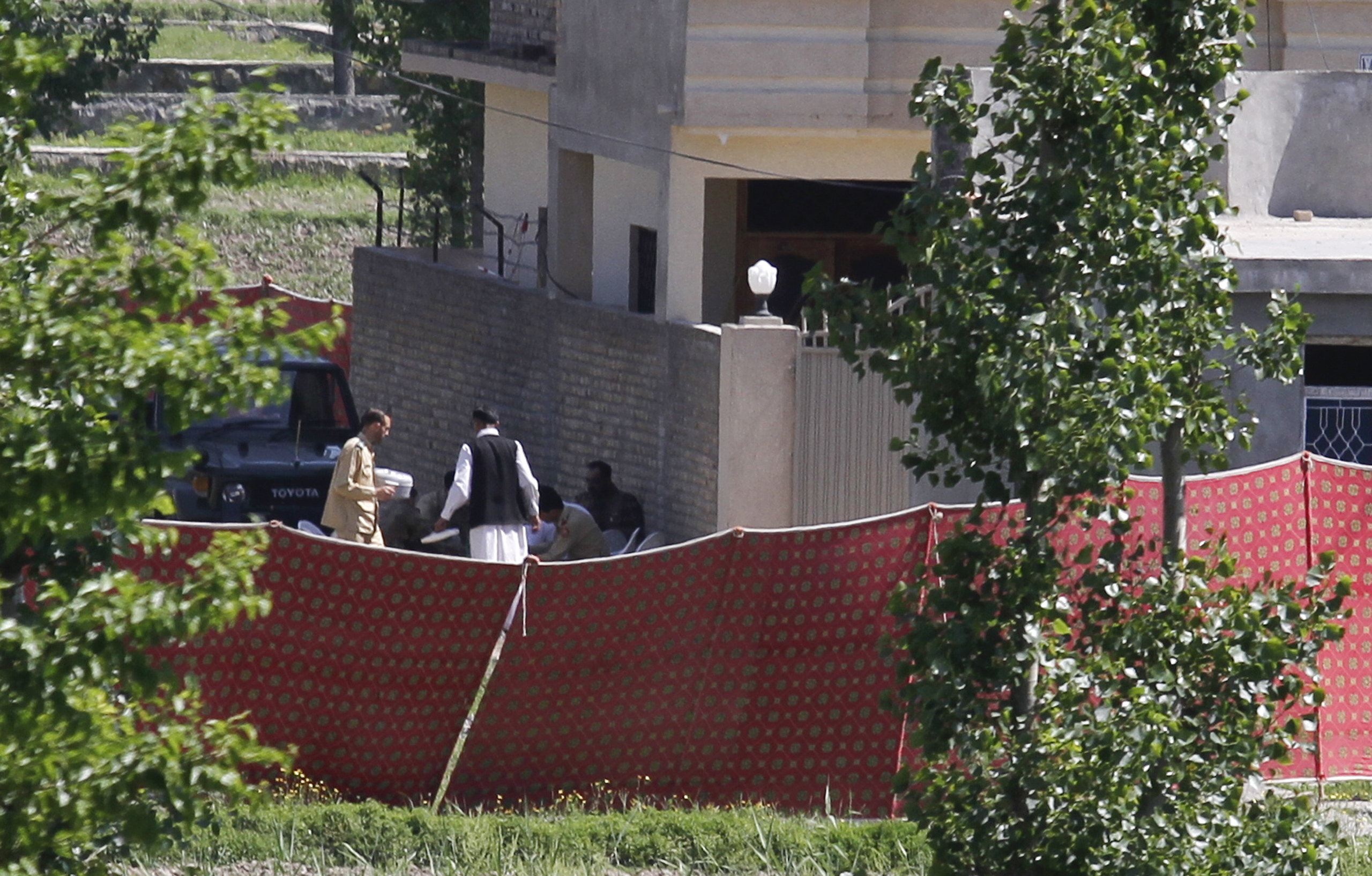 ABBOTTABAD, Pakistan - The death of Osama bin Laden in a fortress-like compound on the outskirts of a Pakistani city that is home to three army regiments and thousands of soldiers raises questions over whether Pakistani security forces knew the whereabouts of the world's most wanted man.

The al Qaeda chief was living in a house in Abbottabad that a U.S. administration official said was "custom built to hide someone of significance." The city around 60 miles from the capital Islamabad is a far cry from the remote mountain caves along the Pakistan-Afghanistan tribal border where most intelligence assessments had put bin Laden in recent years.

Critics have long accused elements of Pakistan's security establishment of protecting bin Laden, though Islamabad has always denied this. Ties between the United States and Pakistan have hit a low point in recent months over the future of Afghanistan, and any hint of possible Pakistani collusion with bin Laden could hit them hard even amid the jubilation of getting American's No. 1 enemy.

Counterterrorism officials told Logan that there is no way the Pakistanis didn't know about this.

"And that's the question they're going to have to answer," Logan said. "Because, you know, until recently the Pakistanis were even denying that Osama bin Laden was on their soil. And that appears now to have been a lie."

That bin Laden could be in Abbottabad unknown to authorities "is a bit amazing" says Hamid Gul, a former Pakistani intelligence chief fiercely critical of America's presence in the region. Aside from the military "there is the local police, the Intelligence Bureau, Military Intelligence, the ISI, they all had a presence there."

Logan reports that Pakistani army chief, Gen. Ashfaq Parvez Kayani, was at the academy just four days before the strike, telling graduating cadets their force had "broken the backbone" of militants in the country.

Pakistani security forces blocked access to the compound Monday, but Associated Press reporters saw the wreckage of a helicopter that crashed during the operation. Local residents described the sounds of bullets, the clatter of chopper blades and two large explosions as the raid went down.

The compound was around one kilometer (half a mile) away from the Kakul Military Academy, an army run institution for top officers and one of several military installations in the bustling, hill-ringed town of around 400,000 people.

An American administration official said the compound was built in 2005 at the end of a narrow dirt road with "extraordinary" security measures. He said it had 12 to 18-feet walls topped with barbed wire with two security gates and no telephone or Internet service connected to it.

A video aired by ABC News that purported to show the inside of bin Laden's compound included footage of disheveled bedrooms with floors stained with large pools of blood and littered with clothes and paper. It also showed a dirt road outside the compound with large white walls on one side and a green agricultural field on the other.

Pakistan's government and army are very sensitive to concerns that they are working under the orders of America and allowing U.S. forces to operate here.

Logan noted that Pakistan's close relationship with the U.S. does not always sit well with Pakistanis.

"Right across Pakistan there's a lot of animosity towards the United States," Logan said.

Logan also said that Pakistan has been "very selective" about which militant groups it protects and which groups it pursues.

"What the Pakistanis are never honest about is that they protect militants who are responsible for the deaths of Americans - American civilians, American soldier," Logan said.

Some critics assailed Pakistan for allowing the operation, while at least one Islamist party was planning a protest against the killing of man idolized by militants inside Pakistan.

The Pakistani Taliban, an al Qaeda allied group behind scores of bombings in Pakistan and the failed bombing in New York's Times Square, vowed revenge.

"Let me make it very clear that we will avenge the martyrdom of Osama bin Laden, and we will do it by carrying out attacks in Pakistan and America," Taliban spokesman Ahsanullah Ahsan told The Associated Press by phone. "We will teach them an exemplary lesson."

Pakistan's former President Pervez Musharraf, who is eyeing a political comeback, said the "killing was the success of all peace loving people of the world." But he also said the Americans should not have been allowed to operate independently in the country.

One Pakistani official said the choppers took off from a Pakistani air base, suggesting some cooperation in the raid. President Barack Obama said Pakistan had provided some information leading to the raid, did not thank the country in his statement on bin Laden's death.

Pakistan's intelligence agency and the CIA have cooperated in joint raids before against al Qaeda suspects in Pakistan on several occasions since the Sept. 11, 2001 attacks. But U.S. and Pakistani officials indicated that this mission was too important to let anyone know more than a few minutes in advance.

Pakistan's foreign office hailed the death as a breakthrough in the international campaign against militancy, and noted al Qaeda "had declared war on Pakistan" and killed thousands of Pakistani civilians and security officers.

It stressed that the operation to kill bin Laden was an American one, and did not mention any concerns that Pakistani officials may have been protecting bin Laden in some way. Domestically, the already weak government may yet face criticism by political opponents and Islamists for allowing U.S. forces to kill bin Laden on its soil, but there were no signs of a major backlash Monday.

Pakistani officials said a son of bin Laden and three other people were killed. Other unidentified males were taken by helicopter away from the scene, while four children and two woman were arrested and left in an ambulance, the official said.

A witness and a Pakistani official said bin Laden's guards opened fire from the roof of the compound in the small northwestern town of Abbottabad, and one of the choppers crashed. However U.S. officials said no Americans were hurt in the operation. The sound of at least two explosions rocked Abbottabad as the fighting raged.

It was not known how long bin Laden had been in Abbottabad, which is less than half a day's drive from the border region with Afghanistan. But Pakistani intelligence agencies are normally very sharp in sniffing out the presence of foreigners, especially in towns with a heavy military presence.

Locals said large Landcruisers and other expensive cars were seen driving into the compound, which is in a regular middle-class neighborhood of dirt covered, litter-strewn roads and small shops. Cabbage and other vegetables are planted in empty plots in the neighborhood.

Salman Riaz, a film actor, said that five months ago he and a crew tried to do some filming next to the house, but were told to stop by two men who came out.

"They told me that this is haram (forbidden in Islam)," he said.

Sohaib Athar, whose profile says he is an "IT consultant taking a break from the rat-race by hiding in the mountains with his laptops," apparently broke word of the event with "Helicopter hovering about Abbottabad at 1 a.m. (is a rare event) and later: "A huge window shaking bang in Abbottabad. I hope it is not the start of something nasty."

"I heard a thundering sound, followed by heavy firing. Then firing suddenly stopped. Then more thundering, then a big blast," he said. "In the morning when we went out to see what happened, some helicopter wreckage was lying in an open field."

Qasim Khan, 18, who lives in a house just across the compound, said he saw two Pakistani men going in and coming out of the house often in the past several years. One of them was relatively a fat man with a beard, he said.

Relations between Pakistan's main intelligence agency and the CIA had been very strained in recent months. A Pakistani official has said that joint operations had been stopped as a result, and that the agency was demanding the Americans cut down on drone strikes in the border area.

The U.S. has fired hundreds of drones into the border regions since 2008, taking out senior al Qaeda leaders in a tactic seen by many in Washington as vital to keeping the militant network and allied groups living in safe havens on the back foot.

In late January, a senior Indonesian al Qaeda operative, Umar Patek, was arrested at another location in Abbottabad.

News of his arrest only broke in late March. A Pakistani intelligence official said its officers were led to the house where Patek was staying after they arrested an al Qaeda facilitator, Tahir Shahzad, who worked at the post office there.

CBS News foreign affairs analyst Pamela Falk, based at the United Nations, says the diplomatic cooperation with Pakistan will help the Obama administration in future efforts to shut down terror financing in other countries where al Qaeda operates.

"There is a great sense of both justice and closure in the U.S. and in the diplomatic community," Falk says, "but this needs to be the beginning and not the end of counterterror cooperation."