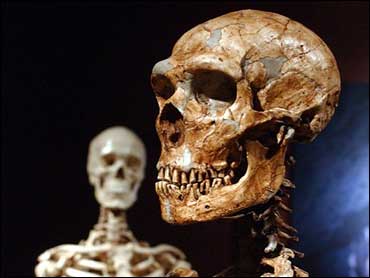 Were these the last Neanderthals?

Small bands of them took refuge now and then in a massive cave near the southern tip of Spain. Now a study says charcoal from their fires indicates that Neanderthals were still alive at least 2,000 years later than scientists had firmly established before.

"Maybe these are the last ones," said Clive Finlayson of The Gibraltar Museum, who reported the findings Wednesday with colleagues on the Web site of the journal Nature.

The paper says the charcoal samples from the cave, called Gorham's Cave in Gibraltar, are about 28,000 years old and may be just 24,000 years old.

Experts are divided on how strong a case the paper makes.

Neanderthals were stocky, muscular hunters in Europe and western Asia who appeared more than 200,000 years ago. They died out after anatomically modern humans arrived in Europe some 35,000 to 40,000 years ago and spread west into Neanderthal territory.

Scientists have long been fascinated by the last days of the Neanderthals. Were they doomed because they couldn't compete with the encroaching modern humans for resources, or because they caught new germs from the moderns, or because of climate change? Did the two groups have much contact, and what kind?

They didn't appear to encounter each other in Gorham's Cave. More than 5,000 years separate the last traces of the Neanderthals from the earliest evidence of modern humans, Finlayson said. He believes the area near the cave contained small bands of Neanderthals and of advancing moderns at the same time, but over a large and varied landscape. So it's not clear if the two groups ever met, he said.

The Neanderthals probably roamed a large area and used the cave periodically as a place to cook, eat and sleep, he said. The cave has yielded butchered bones of such animals as wild goat and red deer, as well as remains of mussels and shellfish. At the time of the Neanderthals, the Mediterranean Sea was about three miles away; rising sea level has since brought the water to within a few dozen yards.

Experts said the region is a likely place to find the last vestiges of Neanderthals, because it's the tip of a geographic cul-de-sac that leads away from central Europe.

Eric Delson of Lehman College in the Bronx and the American Museum of Natural History, who did not participate in the research, said the paper's 28,000-year-old date seems secure but that its case for Neanderthal presence after that is shaky.

Even the older date is the only clear evidence of Neanderthals anywhere after 30,000 years ago, he said. But there have been prior claims of "the last Neanderthal" that were eventually shot down, and whether this one will hold up remains to be seen, he said.

Other experts are less convinced.

Paul Mellars, a professor of prehistory and human evolution at Cambridge University, said he believes the range of radiocarbon dating evidence in the paper suggests ages more like 31,000 or 32,000 years for the charcoal. Contamination by younger material might have skewed some radiocarbon results toward more recent dates, he observed.

Even with the older dates, the paper would be important because it would represent one of the last Neanderthal occupations in Europe, he said.

But paleoanthropologist Richard Klein of Stanford University said it's questionable whether the charcoal fragments really date Neanderthal presence. Neanderthal artifacts appear to be sparsely distributed in the deposit, and their spatial relationship to the charcoal needs to be specified more clearly, he said.

Finlayson said he's comfortable with the 24,000-year figure and called the 28,000-year estimate conservative. There's no evidence of contamination with younger material and chemical analysis argues against it, he said.