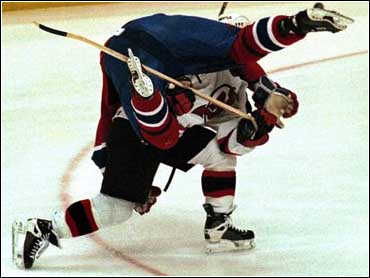 Martin Brodeur had 30 saves for his 40th career shutout and the New Jersey Devils ended their longest winless streak since 1995 by defeating the Montreal Canadiens 3-0 Sunday.

Rookie Scott Gomez set up goals by Petr Sykora and Claude Lemieux in a 2:28 span in the second period, and Bobby Holik added another in the third as the Devils broke a five-game winless streak (0-4-1) that included four straight losses.

The shutout loss was the second in two days for the Canadians, who had their seven-game winning streak snapped Saturday night in a 3-0 loss to Washington.

The Devils fired 48 shots at Jeff Hackett in breaking his six game-winning streak, during which he allowed nine goals.

Brodeur, who lost 3-2 in overtime to Hackett and the Canadiens on Thursday, made about six good saves in recording his fourth shutout of the season.

He made consecutive stops on a back-hander by Martin Rucinsky and a rebound in close by Turner Stevenson late in the first. He also made two good saves on rushes by Oleg Petrov and another on Rucinsky late in the second. He also got lucky when a shot by defensemam Craig Rivet hit the crossbar.

Hackett kept the Canadiens in th game for the opening 20 minutes by stopping 17 shots in the first and good chances in close by Jason Arnott and Holik early in the second.

Hackett never had a chance on Sykora's power-play goal at 5:28 of the second period. Sykora tried to make a pass across the crease to Patrik Elias, but the puck hit off the skate of Canadiens defenseman Eric Weinrich and just got by the Hackett after hitting off his pads.

Lemieux snapped a 10-game goal drought by forcing a turnover by Montreal defenseman Vladimir Malakhov behind the net. Gomez pushed the loose puck back to Lemieux and he beat Hackett in close at 7:56.

Ken Daneyko set up Holik's 20th goal by breaking up Montreal's rush in center ice. Holik took a pass from the veteran defenseman and beat Hackett between the pads from the right circle on somewhat of a 2-on-1 break at 4:39 of the third.