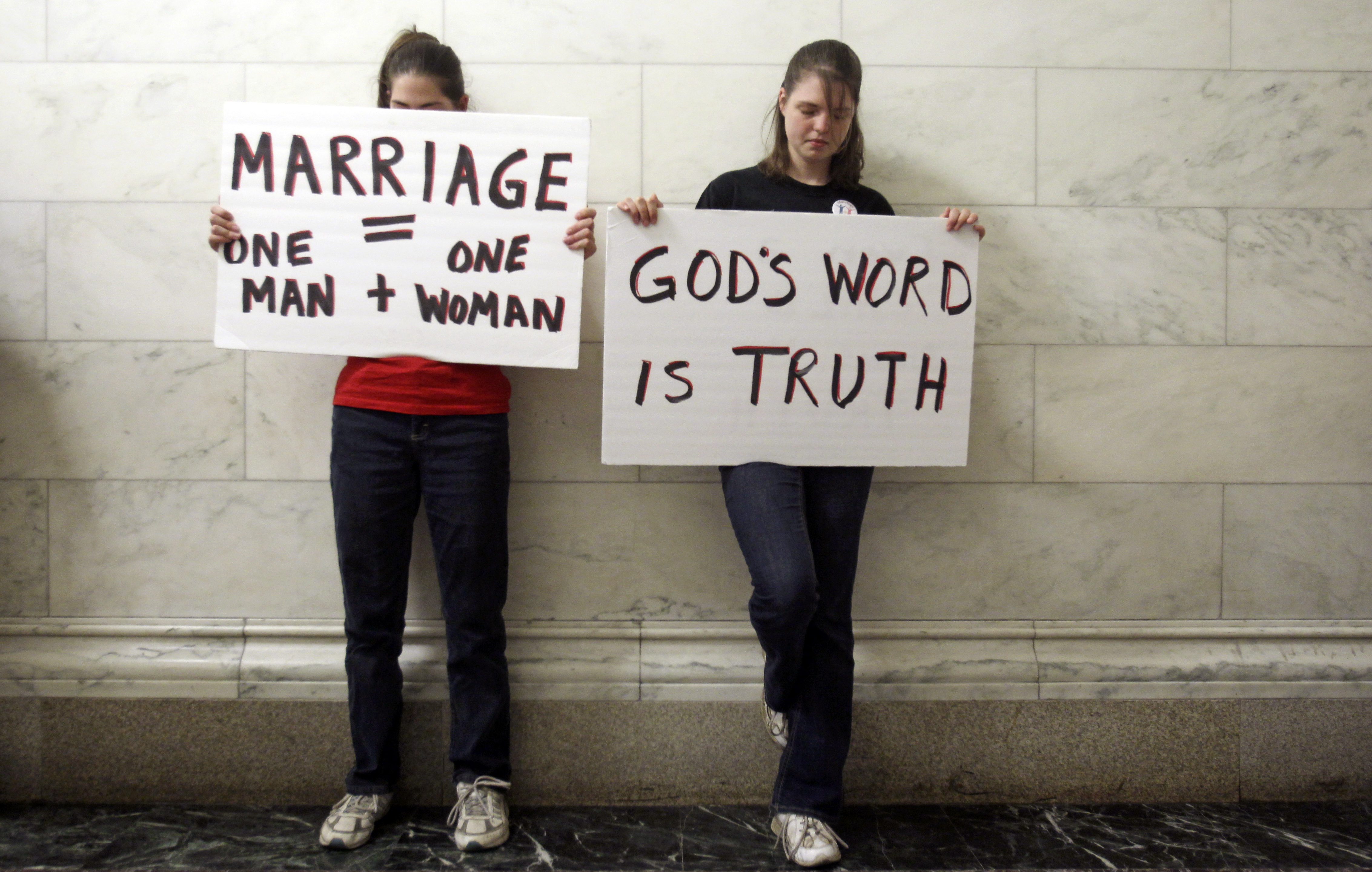 This week, as the Supreme Court prepares to hear two landmark cases concerning same-sex marriage, momentum appears to be on the side of gay rights: A recent poll shows support for gay marriage at an all-time high; voters in Maine and Maryland approved same-sex marriage at the ballot box last November; and in the past few weeks, a slew of high-profile politicians -- including former Secretary of State Hillary Clinton and Sens. Claire McCaskill, D-Mo., Mark Warner, D-Va., and notably, Rob Portman, R-Ohio -- have announced their own support.

But as the court prepares to hear arguments on the Defense of Marriage Act (DOMA) and Proposition 8, two critical cases governing the laws surrounding same-sex marriage, its opponents, however diminishing in numbers, remain defiant in their beliefs -- and committed as ever to making them heard.

"We will never go away. We will never stop fighting for the truth about marriage," said Brian Brown, president of the National Organization for Marriage (NOM), in an interview with CBSNews.com. "If the court recognizes same-sex marriage, it will launch another culture war."

The legal arguments against same-sex marriage -- as expressed in a number of briefs filed by its opponents in the DOMA and Prop. 8 cases -- range from concerns about religious freedom; to originalist claims about the intent of the founding fathers; to the less conventional notion that heterosexuals, unlike same-sex couples who are unable to procreate with each other, pose a "very real threat" to society when not bound by marriage, and thus the institution should be unique to couples with this capability.

But for many, the argument is as much or more about upholding a certain idea of "morality" -- often inspired by the Christian faith -- as it is about the nuances of constitutional law. And for some, those things are one and the same.

"We believe the basis of morality on which this nation was founded was the Judeo-Christian morality expressed in the Bible," said John Eidsmoe, a lawyer for the Christian group Foundation for Moral Law. The Bible expresses objections to homosexuality, he argues, and thus there's no reason to believe the framers would have approved of giving same-sex couples the right to marry. "We see nothing in the Constitution that would remotely guarantee the right of same-sex marriage."

Not to mention the fact that the group, which describes itself as "committed to protecting our unalienable right to publicly acknowledge God," isn't exactly on board with so-called "homosexual conduct."

"We would argue that there's plenty of evidence that homosexual conduct is unhealthy," he said. "When we're talking about same-sex marriage it involves the state. It's not just saying we're going to recognize your right to [get married], but we're going to give it our official stamp of approval. We think that's going way too far."

"Fortunately, in America, we don't put everything up to a vote," said Evan Wolfson, executive director of the Freedom to Marry group, on CBS' "Face the Nation" this week. "My marriage is my marriage, and it means I'm able to share in the same aspirations of commitment and love and support and dedication and connectedness, and that my parents are able to dance at our wedding and that our family and friends are able to support and celebrate and hold us accountable for the commitment we've made to one another. That takes nothing away from anyone else. The gay people are not going to use up all the marriage licenses when we enter marriage."

Brown, of the National Organization for Marriage, rejects the premise that denying gay couples the right to marry amounts to discrimination. Discrimination, he argues, is the act of treating two equals as non-equals. He doesn't see straight and gay couples as equals when it comes to this particular institution.

Plus, contrary to what most polls posit, he and other opponents of same-sex marriage argue that popular opinion is on their side after all.

"If [same-sex marriage is] inevitable, as the media would like us to believe, there's no reason for the court to interject itself in this," said Tony Perkins, of the conservative Family Research Council, on "Face the Nation" this week. "The reality is it's not inevitable and the American people, when they've had the opportunity to speak on this, have spoken overwhelmingly. Thirty states, eight additional states, have the definition of natural marriage into their statutes. So we're far from being at a point where America has embraced same-sex marriage."

David Bossie, the president of Citizens United, whose National Committee for Family, Faith and Prayer filed a brief in the DOMA case, had a different take: "Morality should not be swayed by public opinion polls," he said in an email to CBSNews.com. "The United States Supreme Court does not speak for God. Marriage has been around for over a millennium and The National Committee for Family, Faith and Prayer will continue to fight for pro- family values through old and new media outlets."

For the time being, groups that oppose marriage equality seem immediately focused on touting their messages in advance of the Supreme Court's ruling -- rather than what they'll do pending a loss. Certainly, though, Brown says the issue won't be settled even if the court rules in favor of same-sex marriage.

"If the court did this, it would launch another culture war like Roe v. Wade," he said. "Before Roe, many of those that were supposed to be in the know claimed that once the Supreme Court ruled, the issue would be settled. Has that happened?"

Even people who agree with gay rights advocates that history is moving toward support for same-sex marriage are inclined to agree that one Supreme Court ruling will hardly retire the issue for good.

"Just about everybody thinks that this debate is heading in one direction. There is a note of caution though," said Adam Winkler, a professor of constitutional law at UCLA. "If we had been talking about the state of women's access to abortion in 1973 after Roe v. Wade had been decided, we would be convinced that society was moving inexorably towards expanding the rights of women to control their bodies. And here we are, 40 years later, and Roe is a weaker precedent than it ever was before. There's laws being adopted every day it seems in America restricting women's access to abortion."

"Progress is not inevitable," Winkler added. "We can never take it for granted."