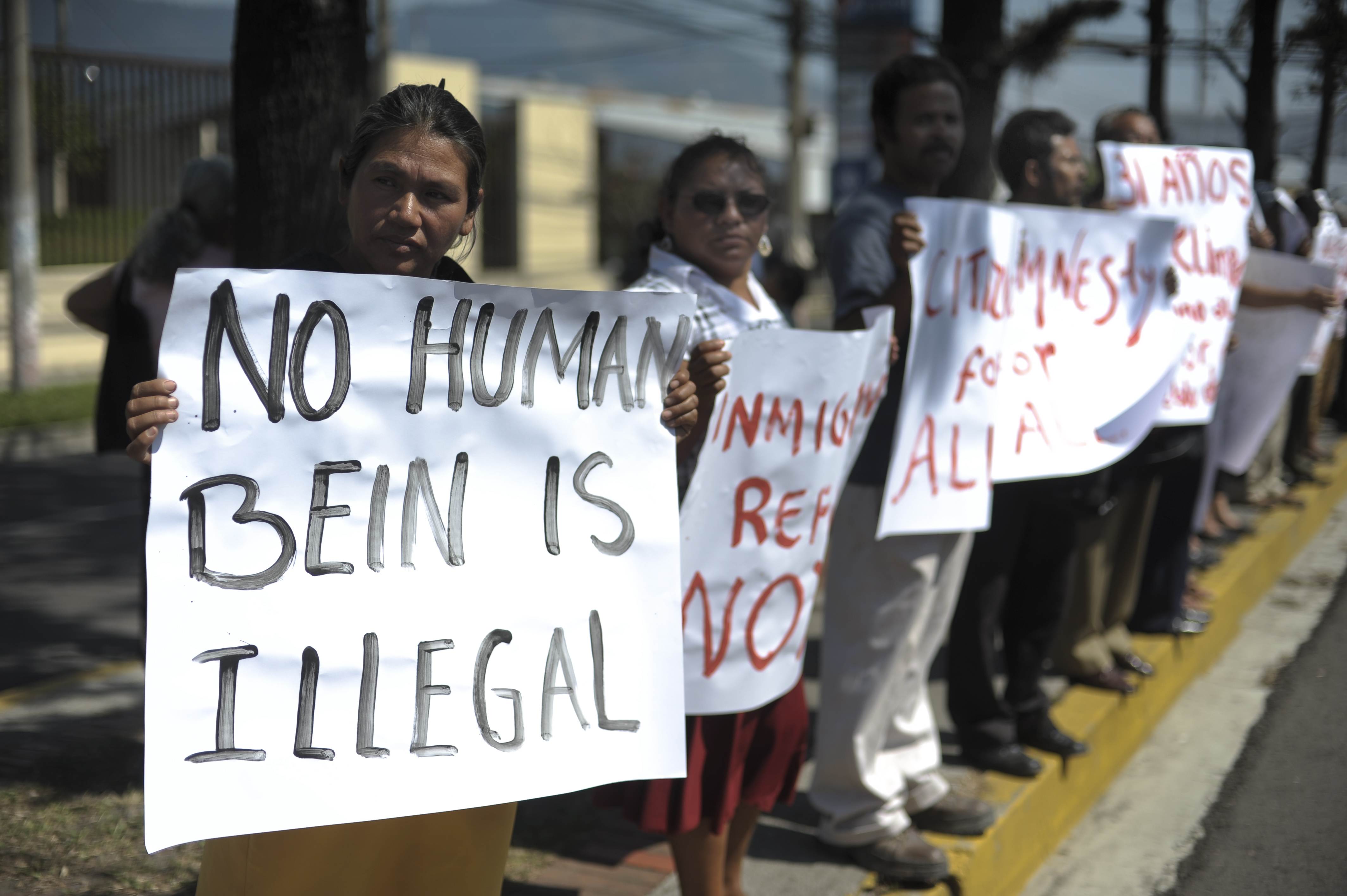 When President Reagan signed comprehensive immigration reform in 1986, he promised that "future generations of Americans will be thankful for our efforts to humanely regain control of our borders and thereby preserve the value of one of the most sacred possessions of our people: American citizenship."

"Twenty-five years ago, we were told this is the going to be the last time we have this conversation as a country, but we're having the conversation again," he said to CBSNews.com. Gowdy was elected to Congress with the tea party wave of 2010 and represents a very conservative district.

"At least in my district, I'm going to have to convince them the level of seriousness with respect to border security and employment verification is higher than it was in 1986," he said. At the same time, he's interested in finding a fair way to bring the nation's 11 million undocumented immigrants out of the shadows. "Not to seem to Pollyanna-ish about it, but I think everyone agrees on why people would want to come to our country."

While there appears to be bipartisan agreement on broad principles when it comes to immigration reform, it's unclear how congressional talks will proceed once legislative details are unveiled. That's why the House Judiciary Committee's first hearing this year is tackling the issue and why committee chairman Rep. Bob Goodlatte, R-Va., plans to hold more hearings and informational sessions.

"I think there's a lot of interest in this issue right now ,and therefore it's a good time to be taking this up," he told CBSNews.com. "Most members of Congress are not fully versed in immigration law -- it can be a rather obscure topic -- and we want to immerse them in more information."

A group of bipartisan lawmakers in the House is far along in crafting an immigration reform proposal, but if House Republicans plan to take up immigration reform through regular order -- as House Speaker John Boehner, R-Ohio, has indicated -- it will have to go through the Judiciary Committee. The committee is made up of some of the most passionate immigration reform advocates on the left, like Rep. Luis Gutierrez, D-Ill., and hardliners on the right, like Rep. Steve King, R-Iowa, and Rep. Louie Gohmert, R-Texas. One of the biggest sticking points, predictably, is expected to be the issue of creating a pathway to citizenship for undocumented immigrants.

Amnesty, or a pathway to citizenship?

"I do believe that a pathway to citizenship should be the option that Congress selects. I don't see that as an extreme option," he said. "To my mind it would be unprecedented to create a class of folks stuck in this kind of limbo not allowed to become citizens... We draw our strength from citizenship, that is the essence of who we are."

In today's hearing, Gowdy said ahead of the event, "Some people will focus on what they want our immigration policy to reflect, some will focus on security, some will probably use the word 'amnesty' -- I usually like to get the people who use that word to define it."

Last year, Gowdy was one of 41 House members who signed onto the "Prohibiting Back-door Amnesty Act" to nullify President Obama's executive actions allowing certain undocumented youth to stay in the country. Still, Gowdy says he's open to ideas that could be characterized as "amnesty," such as letting undocumented immigrants stay in the country legally, as long as they meet certain requirements.

"To Sen. [Marco] Rubio [R-Fla.] and others' point, if what you have now is de facto amnesty, and you're asking for a more difficult, arduous path [to legalization] -- is that amnesty?" he asked. Gowdy declined to answer his own question, noting, "The devil is always in the details."

He said, however, that it's a worthwhile question to discuss. "It's too important of an issue to digress into phraseologies and bumper sticker attacks," he said.

Gowdy said it's reasonable -- as members of Congress and the president have suggested -- for a pathway to citizenship to include English and civics requirements. Immigrants who can't meet those standards could perhaps still be granted some legal status, he said.

For some immigration reform advocates, however, creating a pathway to citizenship for all 11 million undocumented residents is considered a necessary step.

"If we leave out a significant portion [of immigrants] and strengthen border enforcement, we believe that's a dealbreaker," said Arturo Carmona, executive director of Presente.org, a grassroots organization for the Latino community. "Our hope is the White House will hold the line on an inclusive, pro-migrant solution... We have to have an inclusive plan before we make life harder [for immigrants.]"

Carmona's organization is pressing for Congress to create a pathway to citizenship without the barriers called for in past failed immigration reform bills -- and which Mr. Obama and congressional leaders are calling for again. Carmona argues that putting up these barriers will simply leave millions of immigrants in legal limbo. For instance, requiring a Level 3 proficiency in English, as required by the failed 2006 Comprehensive Immigration Reform Act, would leave out 3.6 million immigrants, according to estimates from the nonpartisan Migration Policy Institute.

"We're not really talking about 11 million if you start adding all this," Carmona said, calling such reforms a "partial solution" that would lead to a more complex, intractable problem.

Goodlatte told CBSNews.com these are "legitimate questions" to raise about a pathway to citizenship. Still, he said the problem of illegal immigration will persist unless the laws on the books are fully enforced. Goodlatte said no administration, from Reagan's to Mr. Obama's, has done so sufficiently.

"None have really seriously, significantly enforced immigration law in a comprehensive way, it's been selective," he said. "It's important we address that aspect if we proceed in a larger sense."

Many immigrant advocates balk at the notion that there's lax enforcement -- while the president has allowed for some undocumented youths to stay in the country, U.S. Immigration and Customs Enforcement (ICE) has set deportation records under Mr. Obama's leadership. Meanwhile, the U.S. government is spending more on immigration enforcement than all other principal federal criminal law enforcement agencies combined, according to the Migration Policy Institute, and the number of undocumented immigrants has declined from its peak of 12 million in 2007.

Still, lawmakers from both parties seem ready to find common ground on this issue.

"In Texas, we know firsthand that this administration has put more boots on the ground along the border than at any time in our history, which has led to unprecedented success in removing dangerous individuals with criminal records," Castro said in his prepared testimony. "But Democrats and Republicans can agree that the work to ensure America's safety and security is ongoing, and should be part of the legislative agenda going forward."

Enforcing the law means not only keeping the border secure but cracking down on employers for hiring undocumented workers. When it comes to deterring illegal immigration, "The biggest gap remains employer enforcement because people come here for jobs," Doris Meissner, senior fellow at the Migration Policy Institute, told CBSNews.com. The immigration reform blueprint unveiled in the Senate addresses this in part through a mandatory electronic employment verification system and revamping entry-exit system to more effectively curtail visa overstays.

Since people come here for jobs, it's clear the legal immigration system must be revamped as well.

Vivek Wadhwa, director of research at the Pratt School of Engineering at Duke University, said in his prepared opening statement for today's hearing that the United States' visa policies are "chasing away" talent that's needed more than ever in the competitive global economy.

"Foreign students graduating from American colleges have difficulty in finding jobs because employers have difficulty in getting H1-B visas," his opening statement says. "Those graduates who are lucky enough to get a job and a visa and who decide to make the U.S. their permanent home find that it can take years--sometimes more than a decade--to get a green card. If they have ideas for building world-changing technologies and want to start a company, they are usually out of luck, because it is not usually possible for people on H1-B visas to work for the companies they might start."

Wadhwa told the congressmen that the immigration system must work for spouses of high-skilled workers as well.

"Women in Saudi Arabia have more rights than the spouses of H1-B workers," he said in the hearing. "What sort of a country is this that brings people in, highly skilled immigrants, and doesn't give them rights?"

The Senate blueprint would create flexibility in bringing in necessary immigrant workers at both the high and low ends of the skills spectrum, based on economic demand. However, one of today's congressional witnesses, Michael Teitelbaum, told Congress that he would recommend granting employment-based visas only to high-skilled workers. Teitelbaum served on the U.S. Commission on Immigration Reform from 1991 to 1997 and reviewed the commission's recommendations.

"Such guestworkers are vulnerable to exploitation, and their presence in large numbers depresses the wages and working conditions of U.S. workers including recent immigrants," Teitelbaum's prepared statement said.