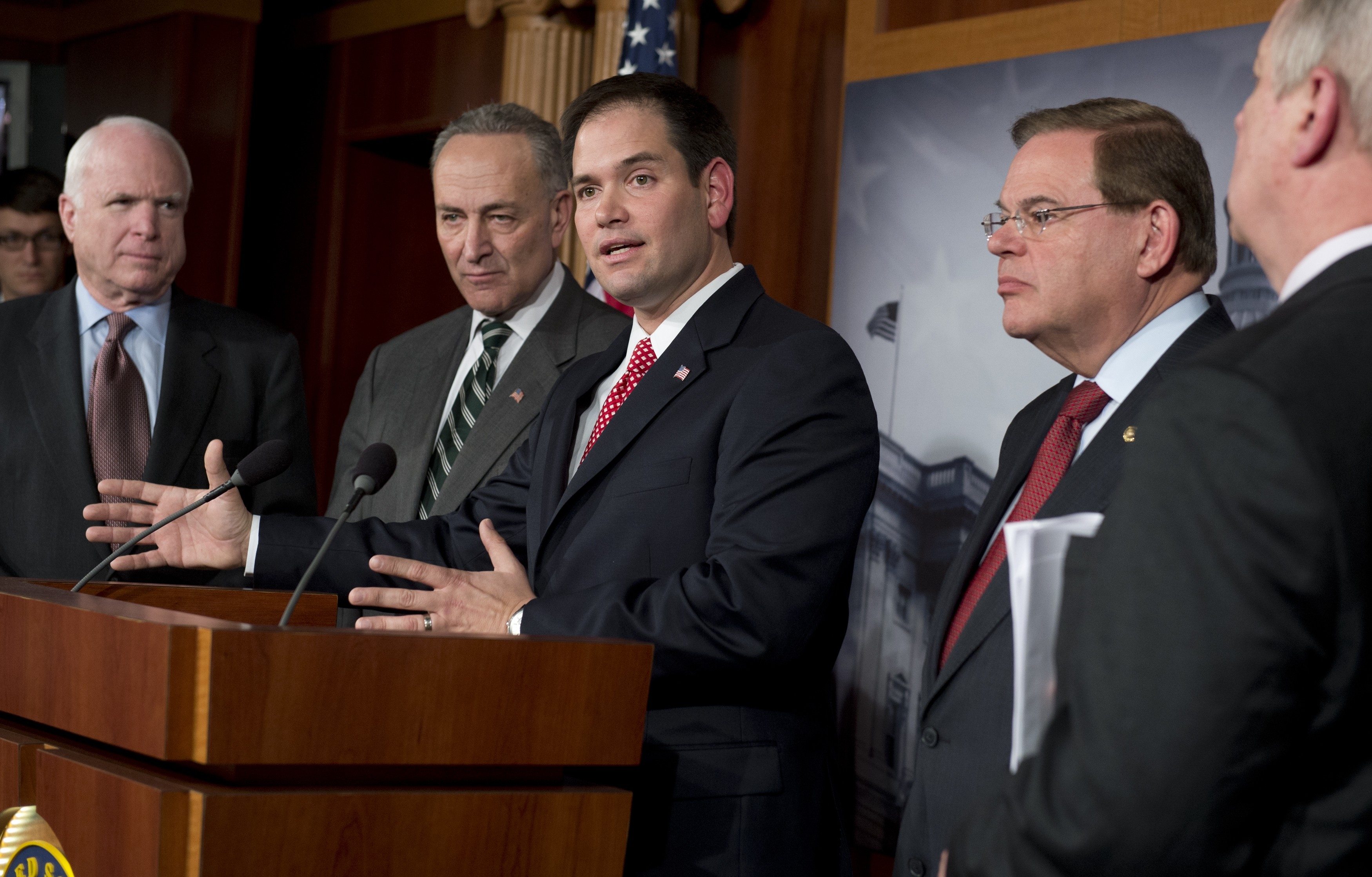 A group of bipartisan senators formally unveiled their framework for comprehensive immigration reform today, saying they are more optimistic than they have been in years for the chance of passing such legislation.

"We have come together on a set of bipartisan principles for comprehensive immigration reforms that we hope can pass the Senate in an overwhelming and bipartisan fashion," Sen. Chuck Schumer, D-N.Y., said today in a press conference. "We still have a long way to go, [but] this bipartisan blueprint is a major breakthrough."

The plan, crafted by four Republicans and four Democrats, is comprised of four elements: creating a pathway to citizenship for the nation's 11 million undocumented immigrants (contingent upon securing the nation's borders first), reforming the legal immigration system, establishing an effective employment verification system, and creating an improved process for admitting into the U.S. valuable workers.

While the plan is so far just a blueprint, Schumer said the working group hopes to have actual legislation drafted by March, with the goal of passing it by late spring or summer. Schumer said he spoke with President Obama yesterday about the plan, and "he couldn't be more pleased."

If the Senate's plan falls apart, Mr. Obama will be ready to step in with his own legislative outline, administration officials tell CBS News.

Mr. Obama will lay out his vision for immigration reform tomorrow in Las Vegas -- a vision he laid out in a major immigration speech in El Paso, Texas in May 2011. The blueprint introduced by the "group of eight" in the Senate is, in fact, very similar to the president's plan.

While the group of eight senators involved in crafting this blueprint includes some who have worked on immigration reform for years -- such as Sens. Dick Durbin, D-Ill., and John McCain, R-Ariz. -- it also includes some noteworthy newcomers. The inclusion of Sen. Marco Rubio, R-Fla., who joined the Senate in 2010 with tea party support, illustrates the new interest from Republicans in pursuing the issue.

Rubio today acknowledged the concerns over the issue from both sides of the aisle.

"There are people concerned about how much this is going to cost the American economy," he said. "By the same token, [people on the other side] have to be honest about how important immigration is to the economy."

Hurdles, of course, remain: Immigration is a low priority for voters, and there are a number of Republicans still opposed to "amnesty." Still, Schumer argued today that there is now more political risk in opposing immigration reform than in supporting it.

"Other bipartisan groups of senators have stood in the same spot before, trumpeting similar proposals, but we believe this will be the year Congress finally gets it done," he said. "The politics on this issue has been turned upside down."

Senators from both parties made a point of showing good will to those across the aisle. Schumer said McCain has been "the glue in our group," while McCain said any progress made this year will stand as a testimonial to the groundwork laid by the late Sen. Ted Kennedy, D-Mass.

Sen. Robert Menendez, D-N.J., added, "I just get the sense of a spirit and commitment that is far beyond what I've seen for some time."

McCain acknowledged that the Republican Party is losing the support of Latino voters, an increasingly important voting bloc, and that immigration "is a preeminent issue with those citizens."

The most politically challenging element of the plan will be creating a pathway to citizenship that both Democrats and Republicans can support. McCain said members of both parties are realizing "we cannot continue as a nation with 11 million residents in the shadows."