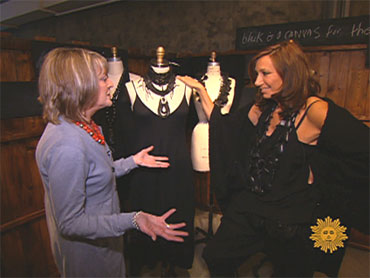 Designer Donna Karan has her own very personal take on fashion . . . and it's a vision her loyal customers have long been eager to share. This morning, Rita Braver pays her a visit:

Donna Karan takes so much delight in showing off clothes she's designed that it's hard to believe it's been 25 years since she launched her own label, becoming one of the best-known names in American fashion.

Her trademark style: comfortable, elegant and ultimately simple combinations that suit busy, working women, including the rich and famous.

Among her fans who have become friends: Susan Sarandon, Brooke Shields and Demi Moore.

"Oh my God, yeah, well, if I could help them feel confident in their body, and I've loved dressing all of them."

Karan is so influential she's been dubbed "the Queen of 7th Avenue."

So of course, we wondered, if she had to describe the "Donna Karan woman," who would it be?

Indeed, she's her own best customer, and model.

"I'm in love with these pants, I have to tell you," she told Braver.

It all comes naturally.

Donna Ivy Faske (Karan is her first husband's name) was born in 1948 in Queens, New York. Her mom was a showroom model. her dad a custom tailor.

"Fashion was in my blood," Karan said, "so that was something I was gonna do whether I liked it or not."

She designed her first collection in high school.

And even though she was admitted to the prestigious Parsons School of Design, she said she wasn;t much of a student there.

"They never thought I would make it as a designer," she said. "I failed draping!"

But she didn't care! By then she was already working for designer Anne Klein. In fact, she became so indispensible that in 1974, when Klein fell ill with breast cancer, company executives turned to the 25-year-old Karan bring out the collection.

The only catch: Donna Karan had just given birth to her daughter Gabrielle.

"So they brought the whole collection to my house to my home in Long Island, and I had to finish up the collection," she said. "And that morning, the phone call came in, just as everybody was arriving, that Anne Klein just died. And the collection was due the next day."

She got it done.

But ten years later, she wanted to start her own line, under her own name.

When she began her line, she got a lot of attention for what she called "seven easy pieces."

"I needed a wardrobe, a real clear defined wardrobe that would take me from day into evening," Karan explained. "You know, I start with a body suit, wrap a skirt around, which you know is the kind of thing that I would wear, a scarf or a sarong. Add a tailored jacket and a scarf and you go."

The label, featuring high end luxury clothes, took off so fast. Even she was surprised!

"The funny part is, when I would go into my office and open up the mail and it said, 'Donna Karan,' well, I thought it meant me!" she laughed. "So I would open up everybody's letters. But they weren't meant for me. They were meant for the business!"

She had a knack for drawing publicity, as with a 1992 ad campaign featuring a woman president.

Hillary Clinton created quite a splash when she wore Donna Karan to the first inauguration. And she wasn't the only one: "Do you know, Bill at the inauguration wore a Donna Karan suit," she said. "So I feel very connected on that level. I love it.

"But women running for president? You know, when you think of sometimes men, you think of kind of like (grunts) 'I'm gonna get it done,' kind of that masculine approach. And a lot of women are more masculine than most men."

"Are you?" Braver asked.

And a lot of fashion sense!

In 1988 she launched the popular, lower priced DKNY line:

"My daughter and her friends were all wearing my clothes," Karan said. "I said, 'Wait a second: This isn't cool. This is luxury! You shouldn't be, you know, walking around in my clothes . . . '"

She designed everything in her Manhattan apartment. "If you can't sleep in it, I don't want to know from it. So every piece of furniture is for sleeping."

Donna Karan's partner, in life and work, was her second husband, Stephan Weiss, for many years CEO of the company.

"This was not his plan, believe me," Karan said. "It was not anything that Stephan even dreamed about doing, was going into fashion. He was an artist, a sculptor. But he loved me, and cared about me, and worried about me."

Worried so much that in 2001, as he was dying of lung cancer, he helped engineer the sale of the Donna Karan brand to the luxury retail giant LVMH, in part so that she would not have to deal with the financial side of things, but could stay involved in design.

"You guys had such an amazing love story,' Braver said. "It almost seems like it was this last gift he gave you, to try to make sure that you were taken care of."

"Could be," Karan said. "I would rather him be here. But Stephan is, as everyone knows, around every part of me."

It is in his honor that she has funded a pilot program at Beth Israel Medical Center, offering yoga, meditation, and relaxation therapies for both staff and patients, like Isaac Broderick ("This has been a pleasant surprise; the diagnosis was a shock, but it's been very nice").

And Stephan Weiss' old sculpture studio has been turned into a space called Urban Zen.

Here Karan hosts events that focus on health and education, and the And the space also houses her latest adventure in retail, the Urban Zen store, with some proceeds going to good works.

At 61, she has a multi-faceted life. But let's face it: Donna Karan still has fashion in her blood.

"What do you feel is your contribution for what fashion can be for people?" Braver asked.

"To me it is about helping you find that part of you that comes alive, and it's not about what you're wearing. It's who you are."